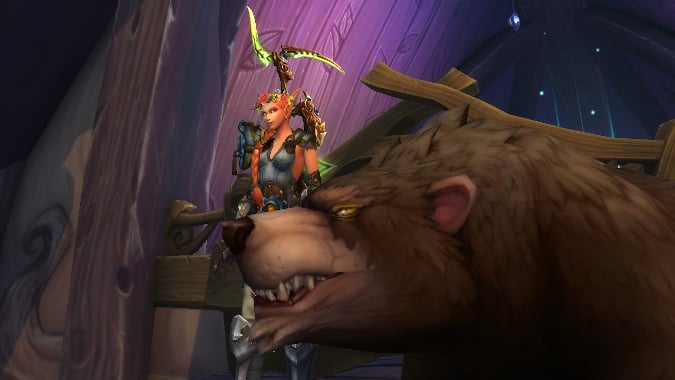 This morning I got information from my daughter’s school about picture day, and I swear coffee came out of my nose. I don’t know why I think that’s so starkly funny — in this economy? in a pandemic? — but any kind of laugh to get you through the day.

This is The Queue, where you ask us questions and we put on our best smile and answer them.

Nope! Usually the initial foray into battling in a new expansion is reserved for populating the world and creating those scalable World Quest battles, which is no mean feat. Beyond that, we’ve seen a possible end to the saga of The Shadowy Figure along with the accompanying achievement, so I wouldn’t hold my breath on more dungeons.

It can be fun pastime but with so much other stuff to grind it seems like it fell by the wayside for a lot of players.

Q4tQ: Will they give non allied races the ability to do the new death knight intro? I want a nelf raised by Bolvar.

Not at this time. In the beta, the original Death Knight races still do the whole deal with Arthas as their starting experience.

I really have taken a dislike to the AoE procs in BfA. I’m fighting a demon (or somesuch), I fire off a single target attack but the AoE proc fires off and now I’m fighting the demon along with 2 crabs, a walrus & a seagull. Single target attacks should NOT trigger AoE events. I do hope they get rid of this behavior in SL (or at least have Neutrals move out of the area when I start a fight with something).

Q4TQ: Is there anything from BfA that you’re hoping will not transfer over to SL?

Aside from “lol Magni and his WOONTZ Azerite” there’s really only one thing that comes to mind instantly.

per my last email pic.twitter.com/9enWYtFCZQ

Q4tQ: Have all the recent Lore Bombs made you reconsider how you’re going to alt-level in Shadowlands? I was originally planning on just taking my first character through the storyline, but with everything we learned lately I’m wondering if there are callbacks and clues you might not catch the first time through.

Not really, especially given the number of alts I plan on valiantly attempting to maintain in this expansion. I’m usually a two-main kinda girl — one on each faction, for pet reasons. With Shadowlands, I’m doing double, because it seems like collectors will want one character tied to each Covenant. I’m not discounting the possibility of maintaining just a single character and pulling a loyalty switch, but it seems likely that we may get new stuff tied to those Covenants in a later patch. I don’t want to get Super Renowned with the Kyrian and swap just to miss out on a pink wings variant in 9.1.5.

In terms of the story arcs and games criticism, it depends on your initial leveling style. If you’re the type to race to cap, clicking Accept without reading and then just look for sparkles, it may be a good idea to go through it a second time to savor it. However, I feel like you’d probably be better served by going through somewhat thoroughly once on your first go around, then playing out the expansion, and then playing through the full story again just before 10.0 drops. We’re not going to get the full picture of the expansion and be able to tease out things like foreshadowing and whatnot until the full story is known.

If you’re all-in on alts and leveling, don’t let me dissuade you from doing the story every time instead of starting to grind out your faction. Do what you like. But I don’t think it’s the best use of your time if you want to deep-dive the lore and examine story elements until we get through into that final patch.

Q4tQ: what’s a good “surprise” drop that you’ve gotten? Something that you weren’t going for or didn’t even know was there, but you got it and were glad to.

I just went into Arathi Highlands to do some WQs on my paladin, and ended up getting the large version of the 7th Legion shoulders. I had enough of the 7th Legion plate to do a full set, but I’d never been lucky enough to get the big shoulders. My pandaren warrior now feels at least 22% more Warcraft-appropriate:

I was one of the first people on my server to level cap in Wrath of the Lich King, so as always, the real grind had begun. I was going about my business, killing as many animals as I could to get leather to increase my leatherworking skill, when a random dragon flew by overhead. “I bet that drops leather!” I thought to myself, and went to kill it.

I was pretty annoyed, because I only got three leather and no scales out of it… but it turns out the Time Lost Proto Drake drops a mount when you kill it. Huh. Who knew.

The Anna Earworm™ result: To give you a further insight of what it’s like to live with me, my son is singing My Heart Will Go On on repeat, which is grating enough as it is. After all, he isn’t Celine Dion, and his little vocal cords just can’t sustain a power belt yet, though he is remarkably on key for a 5 year old. However, he’s not singing along with Celine — he’s singing along with the bad recorder version. You try to get work done with an off-key off-key belted love song in your ear.