The Queue: Time for a makeover! 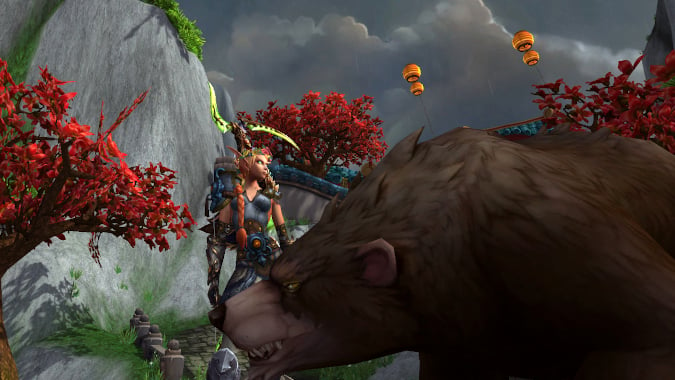 No, no, not me of course. I’m fabulous. But you… are you sure you aren’t ready to update that hairstyle just a little?

This is The Queue, where we answer the questions you ask and then wait until the servers come up on patch 9.0!

The last several months, I have been playing a certain other MMO to pass the time until Shadowlands, but that other MMO doesn’t have a talent system. I know no matter what Blizzard does, People have always complained about WoW’s talent system… from the cookie cutter days of Vanilla/TBC/Wrath, to the modern talent system… and I was wondering… does the talent system have a point anymore? Do you think we could survive without the talent system now?

Thank you, and may you forever walk in the light of the crystal.

We could absolutely throw talent trees in the bin.

The talent system as a whole is kind of odd. It seems to be designed to allow you to mold your character in the way you want, but in practice a vast majority of those talents get essentially no play at all. There are always some talents that are downright non-negotiables, whether they alter an existing ability in a way to make it powerful, or add an activated ability that suddenly becomes the center of a spec’s rotation. This has always been the case — if you play a DPS Priest but don’t take the 31-point Shadowform talent you were flat out doing it wrong, even though it’s what you felt in your heart of hearts or whatever.

In order to accomplish this, we could just… not have them. Let the developers design a spec in full without making power assumptions on the convergence of talent X plus talent Y (but if they take Z instead, they could…). I get that this is probably a controversial opinion, but honestly talent trees strike me as similar to that 6 morrowgrain I still have in the bank. I don’t need it, it’s a throwback — but if I don’t have it anymore, well, I won’t have it anymore! You can see why it’s a dilemma.

After Shadowlands, should the next expansion turn out to be nostalgia-driven, as Legion could be attributed to BC, (maybe) BfA to Pandaria, and then Shadowlands to WofLK, what will the spiritual sequel to Cataclysm be?

For me, BFA draws parallels to Classic, which I’m saying mostly because I want a do-over on Pandaria. Leveling an alt through Halfhill especially is such a nostalgia bomb, and comparing it to BFA doesn’t seem like much of a fit for me besides the Horde vs Alliance conflict. It’s a bit closer if you mostly played Alliance, but the dino jungle experience on Horde-side in BFA is completely different from Pandaria in a lot of ways. Maybe I just want tan expansion where a good amount of the endgame is centered around mouthwatering noodles. It’s possible.

I’m not sure we can get to a “Cataclysm redux” just because that expansion was so defined by worldwide upheaval. Or maybe, more accurately, I’m not sure a change like the one we saw in Cataclysm is worth the dev cost. While it seemed necessary at the time, sacrificing more endgame stuff in order to get a new, dynamic leveling experience didn’t really pan out as I’d hoped — even though it’s pretty funny to watch Garrosh pitch a dude off a cliff because he didn’t live up to the Horde standard for honor and glory.

Oddly, I feel like the one thing that really punctuated a lot of Cataclysm was something we got quite a bit of in BFA — the heavy emphasis on time travel and catastrophic prophesied futures.

Q4tQ: with all the options we now have, how do you decide what characters/alts you actually want to play?

Asking because while I’d been planning to play some Horde alts through Shadowlands, I now realize that would mean neglecting my small army of void elves, and I’d also forgotten that mechagnomes can be warlocks which is an awesome combination, and… yeah. >_< Now I don’t know what to play anymore.

Going into Shadowlands, I’m really trying to focus on my main character, and one alt per faction, so I can get all those Covenant goodies. My Hunter tends to be my main and the first character I go to for a number of reasons. I can solo almost anything with her, and while Hunters do benefit from gear, they aren’t quite as hard up with that first spate of crappy greens as a class that scales amazingly with gear, like Rogues. I’ll wait on playing my Rogue until there are enough geared up people going about doing their dailies and stuff where I can wait a minute or two and get a bit of ‘help’ with elites. The second character I level will probably be my Priest, because the one thing a Hunter isn’t great at is getting into groups, and I honestly like healing. Bringing up the rear will be my newly rolled Death Knight, because somebody has to do Maldraxxus. I also plan on finally getting my butt in gear and doing all the Legion Order Hall stuff on her for the pets.

I’d say, figure out your Covenant assignments first, then narrow it down based on that. If you have, say, a Paladin and a Priest both headed for Bastion and a Druid going for the Night Bae renown, maybe put one of the two Kyrians on the shelf initially.

Q4Anna: What pet will you be replacing Rutherford with when the servers come up?

First of all, how dare you.

Q4tQ: So does the shattering of the Helm of the Domination technically take place concurrent to the arrival of the prepatch? Or has it not happened yet?

Just before it. It takes a while to ship anything these days, even infected grain.

Q4Anna: Do you think Blizzard designs battle pet trainers with a specific team and/or strategy in mind, or do they just make a hard pet trainers, and go, “Uhh, figure it out?”

The previous nerf to howl/bomb, and tomorrow’s nerf to claw/flock (and pet abilities working together in general) makes me wonder if Blizzard is like, “No guys, you’re supposed to use pets X, Y and Z, with abilities A, B, C” for this fight, or if they have no real plan for how a pet battle unfolds, and if a combo becomes super effective they’re like, “Whoops, can’t have that!”

Having done all of the family battles in Mac’Aree (yesterday and this morning), I just don’t see how these pets will be do-able if claw / flock and something like doom and haunt don’t stack or work together.

It’s hard to say, and it probably varies from designer to designer. I do think there are several which were designed as anti-strategies — the last boss of the Gnomeregan battle pet dungeon was pretty clearly designed to stymie the Clawpede strategy, for instance. There also seem to be a few where you really need a per-hit shield like Stoneskin.

Multiplicative buff synergy has always been a bit of an issue, and even though the additive buff will be applied after the multiplicative buff, Clawpede will still be a really strong strategy — for certain battles. The issue with Clawpede isn’t that it’s effective strategy, but that it’s too effective. You can essentially ignore everything else about the battle and just use that to win no matter what family your opponent is in or what their moves are. While I don’t necessarily advocate for making battles hard per se, it’s nice to make it so that a little thought goes into it.

Unfortunately for Cory, as soon as I had the idea of “makeovers” in my head, it became an all-Wicked kind of day. Enjoy your amazing new makeover, instead of dreary who-you-were — well, are.