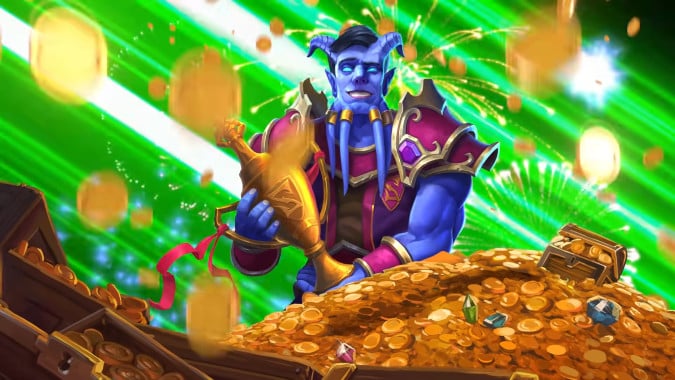 But it can certainly be overwhelming at first. Beyond picking your hero and building your initial deck, as you keep playing, you will be offered Treasures — some much more powerful than others. How to know which is which? How can you evaluate these treasures so that you know you’re picking the ideal fit for your own class and playstyle instead of falling into a trap?

Most Treasures serve once specific purpose and fit into certain strategies. On this article, we’ll separate some of the most powerful Treasures in the game by category, so that you can gain a better understanding of which Treasures to pick and when. 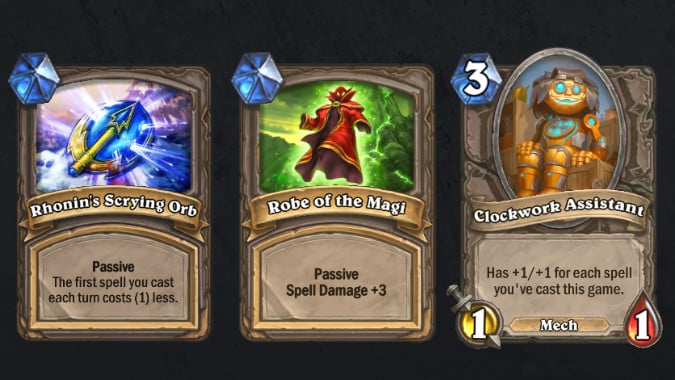 Casting spells is good for nearly every class. Cost reduction effects are extremely powerful overall, under nearly any circumstance, when playing any card game. For Duels, where you tend to get some shorter games while your health is still low, they’re even better: most games get decided long before they enter the later turns. So you get cost reduction when it matters the most, which is when you have fewer mana crystals.

Robe of the Apprentice

Robe of the Magi

These are insta-pick treasures when you’re going with damage-dealing spells. There’s not much to be said here: getting more damage out of every spell you cast is simply good.

If you have a lot of cheap spells, you pick this one. Mage, Rogue, and Demon Hunter are good candidates, usually.

If you have a good number of spells that would be worth it to cast twice, pick this Treasure. Good candidates are buff cards, as well as cards that increase your hero’s attack, and damage spells that affect the opponent’s whole board. 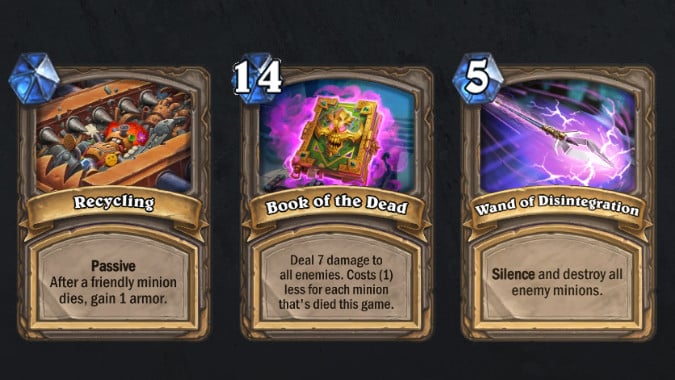 Treasures for board clear, removal, and protection

For classes that need a help with their defenses, this is a good option to consider. It’s especially good on Warlock: all the small minions they summon can build armor quickly, which mitigates their self-harm effects. It’s also good for Rogue and Demon Hunter due to how often they tend to use their own faces to attack enemy minions.

Book of the Dead

If you’re struggling with dealing with your enemy’s board, this will be a good pick. Certain classes like Rogue and Hunter are especially lacking in ways to do this, so they will almost certainly benefit.

Excellent option for clearing up to six enemy minions in one go! For classes that lack in board clears (such as Hunter or Druid), this is a must-pick.

Probably the best removal card available to you. Hard to imagine a situation where you don’t want to pick this. 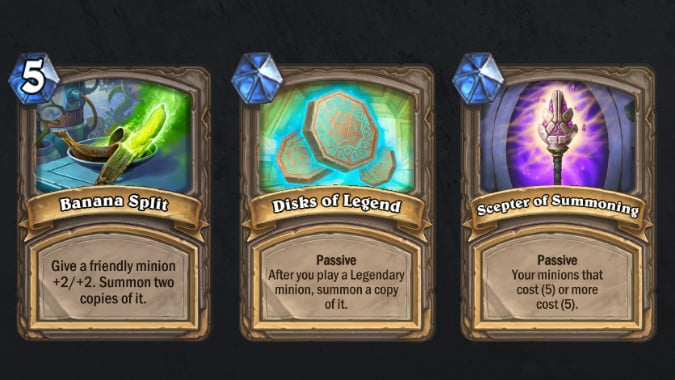 Do you have a powerful minion in your deck? Would you like to have not one, but three of it at once — and all buffed-up as well? Just pick this card. If you have multiple good targets for it, even better.

Basically, if you’ve grabbed a number of Legendary minions and they’re getting played every game, this will be a good inclusion. This is especially good for Warriors who get Rattlegore: this super-sticky minion will become even stickier.

If you have any number of minions with powerful effects, such as good Deathrattles, you will want this. Hunters and Paladins will almost certainly benefit.

Amazing card if you have some beefier minions. You’ll get to dictate most trades, and gain an enormous tempo advantage over your opponent.

The ultimate “big minion” card. If your deck is leaning on the heavier side, with many minions that cost 6 or more, this card will be a godsend. 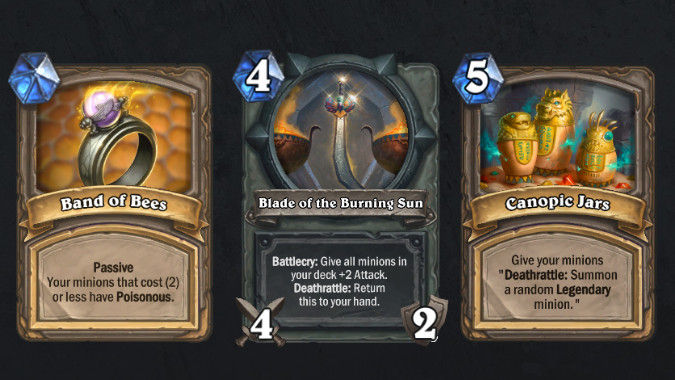 Any class that can summon a large number of small minions will benefit from this: Warlocks going for a zoo strategy (where they try to constantly fill their board with small minions), Mages focused on their hero power (which summons Mana Wyrms), Hunters going for Deathrattle effects that leave other minions on the board, etc.

Blade of the Burning Sun

Especially for zoo strategies, this will be a great weapon. You’ll get to buff your swarm of small minions, and you might even get to repeat the effect a few more times.

Another excellent pick for zoo-style decks. Shaman will certainly benefit especially well from this, with all the totems they summon.

If your deck has many minions to play, you’ll inevitably get some constant value out of this. 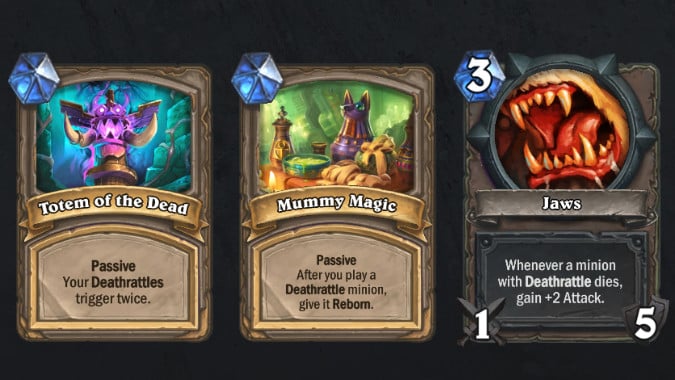 Totem of the Dead

All of those treasures have enormous synergy with one another. If you’re offered some good Deathrattle minions, you should strongly consider going for any of these. 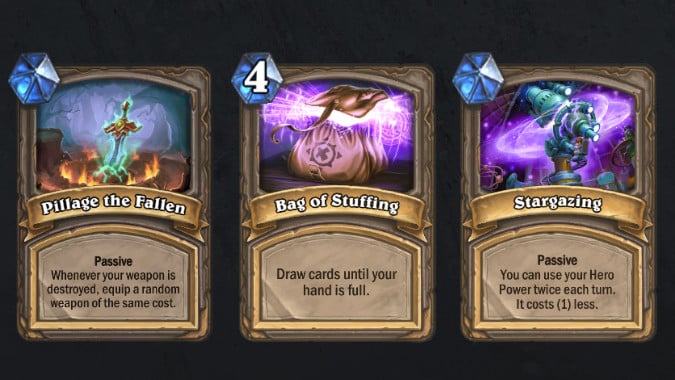 Treasures for other deck types and strategies

Classes like Warrior, Paladin, and Demon Hunter will almost certainly benefit from this. As long as you’re making use of weapons in your deck, this is a worthwhile inclusion.

Mages tend to run out of steam when they cast too many spells. Warlocks will also want to constantly fill their hands with discard fodder to be used with their Hero Power. Paladins and Hunters simply don’t have a lot of card draw. These Treasures will help remedy that.

In the case of Demon Hunter, you may get twice as much use of your many spells and effects that allow you to attack. Any card that increases your attack on that turn becomes effectively twice as good. For Druid, you can get up to +4 Spell Power for only two mana! That will certainly give an enormous boost to your damage spells. 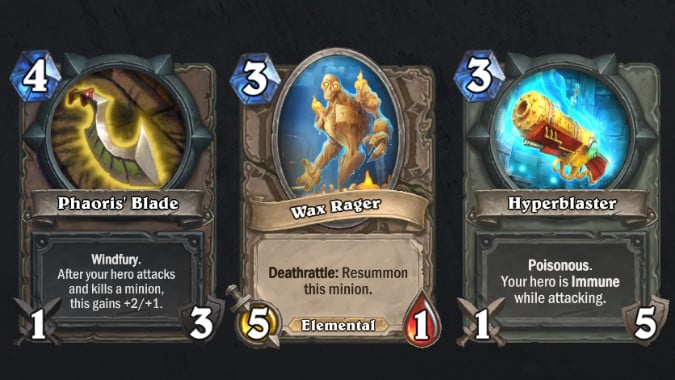 Treasures that are good for any deck

By the Light! What value! You kill a minion with this weapon, you get to restore the durability you would have lost from that attack and make it even stronger. Maybe the very first kill might require some setup, since the weapon only has 1 attack by default; but as soon as you get that first kill, your weapon suddenly has 3 attack, and things will definitely start going your way, big time.

Infinite value? Infinite value. You pay the 3-mana cost once, and then you get to deal 5 damage every turn, and saving for enemy Silence effects of some kind, there’s nothing your opponent can really do about it.

This weapon is, frankly, a little overpowered. Think of it like this: once a turn, you can remove any enemy minion, no matter how strong it is, without suffering any consequences for it besides losing one durability on your weapon (Divine Shield notwithstanding). Powerful, no questions asked. 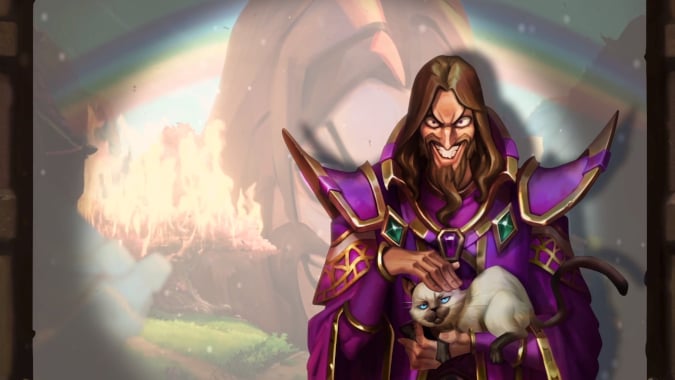 So there you have it! This isn’t meant to be a comprehensive list, but it should give you a very good idea of what to pick, depending on your class or deck type.

The Duels mode is constantly evolving, though; so do keep in mind that the meta will change, and that cards might even get nerfed or buffed. Also, certain cards will simply work or not work depending on your playing style. But this list should hopefully serve as a good starting point for you.