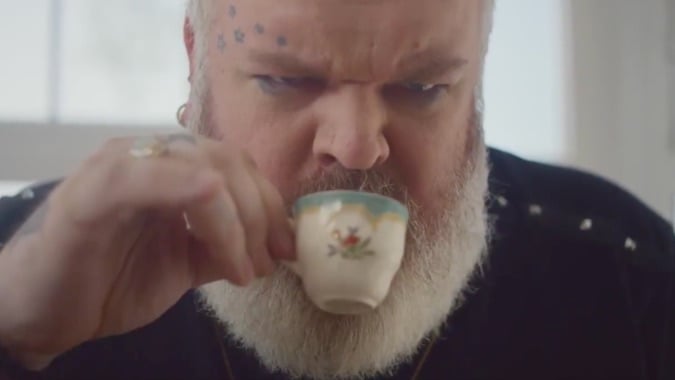 Is there anything more delightful than watching as a bunch of folks on the internet summon each other to World of Warcraft? Answer: No, no there isn’t. From beet chopping to the tiniest of teacups, follow the thread (in order) as these celebrities sound the horn (literally, in each video) to call their friends into Shadowlands.

We start off with Finn Wolfhard digging through an epic chest for what is a truly impressive horn to summon Sydney Sweeney:

Sweeney hears the call as she smacks golf balls into a truly gigantic screen, and reaches out for Ronda Rousey to join the party:

Rousey is busy performing some truly epic grapples (with a “Do not attempt” warning) and still manages to both respond and reach out to Jimmy O. Yang and Pierre Gasly:

Gasly broadcasts to fellow adventurers to follow him into Shadowlands but stops there:

Meanwhile, Yang apparently predicted Rousey’s call and carries forth to invite Jason Hobson, a.k.a. the Hacksmith, to the growing party:

Hobson’s been waiting to use his horn, mounted on a well-organized tool wall, and awakens Chris Mintz-Plasse:

Mintz-Plasse has to retrieve his horn from a pool floatie and needs his master strategist Danny Pudi:

We find Pudi highlighting lines in a script but he’s ready for the clarion call of adventure and reaches out to his giant on speed dial, Kristian Nairn:

Heading into Wow with some friends and a most cunning plan. But we’ll need a giant. See Kristian’s response here:https://t.co/tygpCyAu0K#SoundTheHorn #WoW_Partner #WorldofWarcraft pic.twitter.com/dEWDMGEuL3

Nairn is heavily focused on what appears to be the world’s smallest teacup but makes time to reach out to coworker Isaac Wright (who “always has his back” — a Game of Thrones throwback):

Wright may be busy massacring some beets, but he’s happy to join in (after removing a potato from his horn) to call forth Marcus Scribner:

Found practicing piano, the lure of Warcraft and magic pulls in Scribner. After dibsing Druid, he issues a summons to Twitch streamer and YouTuber TimTheTatman:

We end here, as TimTheTatman puts forth the final call for adventurers to unite (amidst an existing conversation about the expansion!):

Just got an epic invite to jump into the new WoW. See how it all began. #SoundTheHorn #WOW_Partner #WorldofWarcraft pic.twitter.com/UXv7C4Owzs

Blizzard Watch is made possible by people like you.
Please consider supporting our Patreon!
Filed Under: Shadowlands, WoW Marketing, Wow Shadowlands
Advertisement