How are you feeling about your Covenant choice? 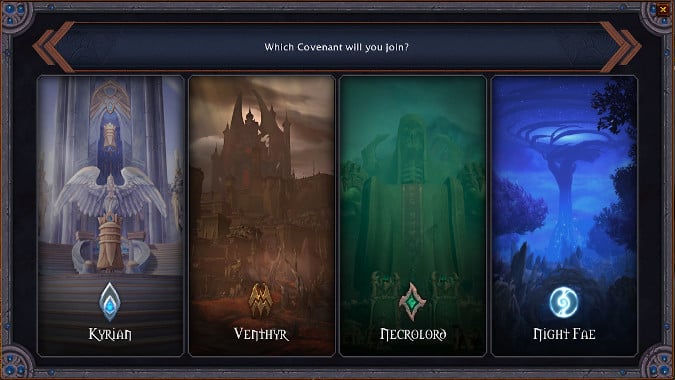 Ah, the first week after an expansion has released. You’ve started to get into a groove, maybe looking to increase your main’s item level to get into Heroic dungeons — or you may even have started leveling alts just to make sure you’re ready for the Darkmoon Faire next week. Some people are already farming the memories for their BIS Legendaries, and others are gearing up for the opening of Castle Nathria next week. Or heck, you may just be taking your time and not worried about hitting 60 yet — and there’s absolutely nothing wrong with that.

These are all standard beginning-of-an-xpac activities, but Shadowlands threw us a curveball with Covenant choices. Part of the endgame is now split between four different sub-factions, and while there are a lot of similarities among them, the differences are pretty noticeable. First and foremost is the general aesthetic and atmosphere of the zones — some people like Maldraxxus, some people don’t. Maldraxxus is actually where I’ve been spending a lot of time, because my first toon to 60 chose the Necrolord Covenant.

While I am most admittedly not a fan of all the oozes and blight in the zone, I have to say that I’m enjoying the general attitude of the fellow NPC members of my choice. Soulbinds range from the not-quite-all-there Marileth to Emeni, a noticeably vengeful Sethrak spirit currently inhabiting an abomination. Of course, the best part is hanging out with Draka, but the other NPCs in the Seat of the Primus are interesting as well.

Of course, there’s a part of me that wishes I had gone Kyrian Covenant, because it’s generally stronger for my class spec and has a strong Legendary that syncs well with the abilities given by that Covenant. I promised myself, though, that I wouldn’t focus on min-maxing with the Covenants — it helps that I’m not currently raiding — and instead just choose what works for my characters. After all, it’s not like I don’t have two more years to take a stroll through each Covenant with my other toons.

How about you? Are you still hesitating to make a choice, or did you know what Covenant you were going to choose before you even started leveling? Has your mind been changed at all by leveling or the Covenant gameplay? And what other Covenant are you itching to try? I for one have heard some good things about a certain performance the Night Fae put on…

Blizzard Watch is made possible by people like you.
Please consider supporting our Patreon!
Filed Under: Covenant, Maldraxxus, Shadowlands
Advertisement