What are the best heroes for Hearthstone Duels? 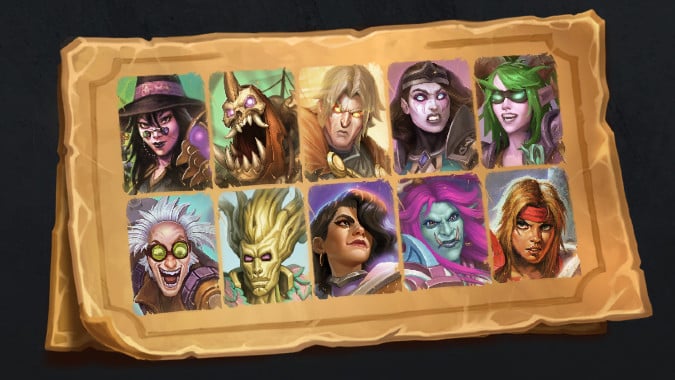 Are you struggling in Hearthstone Duels, where random luck — and the particular pool of Treasures and cards offered to you — can pretty much dictate whether you’ll have a good or a bad run? Well, learning which Treasures are good or bad goes a long way towards improving your skill in Duels, but picking the best possible Hero is just as important.

The truth is that the ten classes aren’t very well balanced at the moment, and if you pick a better class (and better Hero Power), you’re more likely to succeed. Madness at the Darkmoon Faire being released was a big help to the overall balance of the Duels game mode. Each class has more cards, a new Hero Power, and several new avenues of play, making most of them viable in some way. As a result, we now have more classes that fit into the “middle of the pack” tier, being viable under certain specific circumstances — but that still doesn’t mean all Heroes are equal.

If you want to win your next Duel, these are the power rankings for current pack of Heroes and Hero Powers to help you make the best choice. With the right Hero, you should be able to battle your way to Duel success! 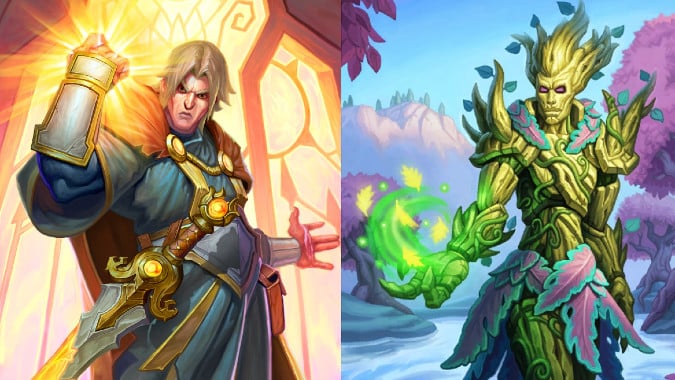 Paladin’s first Hero Power, which resurrects a random minion you’ve played in that game, can very easily backfire on you. In theory, you want to keep bringing back a powerful minion you’ve played — but that strategy has the very obvious downside of requiring you to not play many weak minions, which in turn ensures that you usually suffer at the start of the game. When Paladin gets rolling, it gets rolling — but it’s a very top-oriented class, where you want almost nothing but strong minions. Surviving long enough to be able to actually implement your strategy is not the easiest task, especially since Duels games tend to be short at first, due to the smaller health pools.

The second Hero Power, which is oriented towards Silver Hand Recruits, pales in comparison to everything else the game has to offer at this point, and is not strong enough to compete.

Druid is a very similar story to Paladin. Being a “ramp” class — that is, a class that tries to cheat its mana curve in order to play stronger cards earlier than usual — the most powerful Druid cards are usually the most costly ones. To play Druid successfully, you usually need to get to some specific higher-end combo — something that is much harder to do in the faster-paced Duels environment.

The Eclipse cards from the Madness at the Darkmoon Faire set have certainly helped, and Druid is a “playable” class if all the stars align (pun certainly intended). It remains as a much more difficult option to successfully pull off wins with than several other classes. 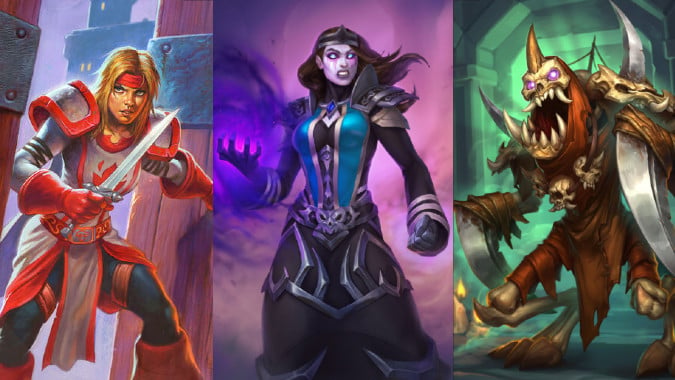 Rogue certainly benefited greatly from getting a secondary Hero Power when Madness at the Darkmoon Faire got released. Connections is a Hero Power that lets you generate almost infinite Combo triggers, allowing you to no longer have to rely on risky all-out aggression if you choose not to.

This Hero Power lends itself to the other side of the Rogue class, that many players (myself included) enjoy a lot more: the tactical approach, where you make enormous tempo swings with strong combo effects, bouncing minions everywhere, and removal galore. It is certainly trickier to pull off than the previous Hero Power (the 2/2 dagger), but also certainly much more consistent to allow the class to reach the upper echelons of Duels, and maybe even snag some 12 win runs.

When discussing Druid and Paladin, I mentioned that they need to get to the end of the game to shine, but they struggle to survive until them. Well… meet Priest, which is also a class that will benefit greatly from the strongest minions and Treasures out there, but is far more well-equipped to actually get there. Priest has plenty of healing effects, as well as other defensive cards, and the ability to turn its opponent’s threats against themselves for some breathing room. When picking Priest, you are in a much more comfortable position to be greedy, since odds are higher that your gamble will end up paying off.

Warrior has some good removal tools, some good aggressive options, some interesting options with weapons. Since the release of Madness at the Darkmoon Faire, it’s now on a much better footing to face against Demon Hunter, which previously outclassed Warrior in nearly every aspect of the game. The keys to your success still lie on powerful legendaries: either Rattlegore, with value-based builds, or Grommash, serving as the payoff to your wanton aggression. 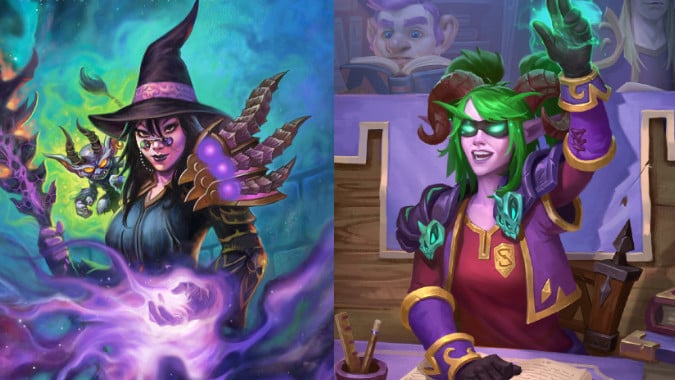 Warlock requires you to successfully make use of the Discard mechanic in order to win. It is a high-risk, high-reward type of class, where when you play your hand correctly, you see a lot of payoff. This method was inconsistent at first — so much that I originally placed Warlock at the bottom tier. But with Madness at the Darkmoon Faire, Warlock suddenly became much more consistent, due to gaining access to newer, better cards that play into Discard effects. It might not be the easiest class to play correctly, but it is certainly one of the strongest when you do so.

In Constructed Hearthstone, the Demon Hunter class has already been nerfed… I actually lost count of how many times, but it was at least five. The class simply had very powerful cards for an aggressive playstyle. Duels, with its shorter, fast-paced games, can be all about aggression; and if you decide to go that way with Demon Hunter as your class of choice, you will find many, many ways to keep dealing damage to your opponent while destroying their minions, drawing cards, and healing yourself. They can also shine through the use of their Soul Fragment synergy cards, as well as their bigger demons, which are also very powerful.

That said, the class is no longer as shiny as it was before Madness at the Darkmoon Faire — not because it got weaker itself, but because many others caught up, or even surpassed it. 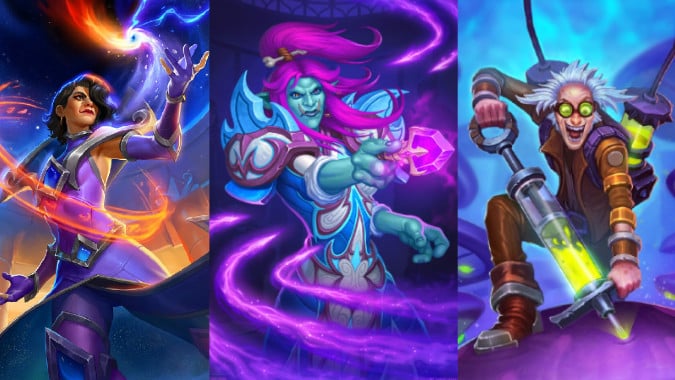 Shaman was so strong at first that it had already been nerfed, before the game mode was even “officially” out. The class can win the game in multiple ways: through Evolving minions and using AOE spells to control the board; through damage spells, applied either to opposing minions or directly to their opponents’ faces; or through powerful weapons, combined with plenty of self-healing. Add to all of that the draw mechanics from cards like Far Sight and your Mana Tide Totem (which can be generated from your first Hero Power), and Shaman is a very strong contender.

Despite the annoying nerfs, Madness at the Darkmoon Faire aided Shaman by adding a lot of power to its totem synergies. It has arguably more paths to victory than any other class, which makes it always a class to strongly consider.

Mage’s first Hero Power allows it to “ping” enemy minions and constantly create Mana Wyrms from it. The Mage class has plethora of low-cost spells to pick, and ways to keep generating more and more spells, allowing them to easily control the board and feed their Mana Wyrms. In addition to that, there are several Treasures that boost this playstyle of playing many spells, by making your spells cost less, or giving you permanent increased Spell Power. The Duels environment simply meshes very well with what the Mage class has at the moment, assuring that it remains near the top.

Not much has changed to mess with Mage’s dominance once Madness at the Darkmoon Faire rolled out. Most people still place it firmly at the top, or somewhere near it. Whatever your assessment may be, Mage is certainly a strong pick.

Hunter has been very successful so far with one specific strategy: Deathrattle. Which sort of places it right in the middle of the pack: if the RNG gods are with you, you’ll be offered all the Treasures and buckets that feed into your Deathrattle synergy, and you’ll get the ball rolling on your Hunter deck.

What the class needed to truly shine was a little bit of consistency. And with Madness at the Darkmoon Faire rolling, they got a second Hero Power that allows them to trigger a minion’s Deathrattle whenever they want to. That was exactly what they needed to skyrocket into the top of the class.

Blizzard Watch is made possible by people like you.
Please consider supporting our Patreon!
Filed Under: Duels, Hearthstone Duels
Advertisement