What “bon mots” — witty remarks and one-offs — in Shadowlands have you squealing with glee? 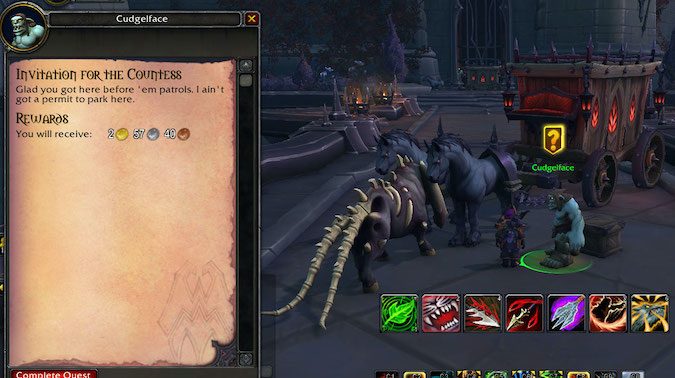 A “bon mot” is a witty remark, clever saying, or witticism. As I’m playing through Shadowlands, I’m finding all sorts of bon mots; one-off things which make me actually laugh out loud, giggle, guffaw, or go, “Did he just say what I think he said?” I’m including quests, such as the one in the header image. Seriously, Cudgelface needs a parking permit?

Lines like this have me gleefully playing way past my bedtime. I recently did a quest in Revendreth where one of the random gray drops was the Almost Empty Amontilado Cask. I actually squealed in delight, scaring my cats. This references a short story, “The Cask of Amontilado,” written by Edgar Allen Poe. Poe is more famously known for “The Raven” or “The Tell-Tale Heart” than for this, but where I found the in-game item was completely in keeping with the story. For an English major, I was thrilled.

Also from Revendreth comes the one-liner spoken by the imps who run the taxi services. “Why would anyone walk anywhere?” I laughed so hard the first time I heard it. My Covenant is Revendreth for a number of reasons, but Theotar as a reference to the The Hatter in Alice in Wonderland sort of sealed the deal. (Lewis Carroll never directly referred to him as the “Mad” Hatter. It’s the Cheshire Cat who calls him “mad” and Disney reinforced this.) I keep waiting for him to tell me it’s time for my “unbirthday.”

And the achievements. From Castle Nathria comes “Feed Me, Seymour,” a clear reference to Audrey II from Little Shop of Horrors. “Taking Care of Business” and good luck getting THAT song out of your head after doing this achievement. Another song which immediately got stuck in everyone’s head was completing “Caught in a Bat Romance.” As a jazz lover, I immediately got the “I Only Have Eyes For You” song reference. That one is a bit obscure. “Toss a Seed to Your Hunter” references the song “Toss a Coin to Your Witcher” from the Netflix show The Witcher which quickly went viral after the episode aired. One-liner references include, “I Can See My House From Here,” a well-used (almost overused) comedic trope.

I don’t play many other video games so references to them will go right over my head. I’ve had guild members get excited when they find something from another game. Clearly, the game designers had a blast filling this expansion with bon mots, song takes, and cultural references which I have totally enjoyed discovering as I run around Shadowlands.

As this year draws to a close, what bon mot, item, quest, achievement, etc. have you found which made you laugh out loud, guffaw, squeal with delight? I know there are way more than I have listed. I haven’t found the reference to a dumpster fire, yet. Don’t tell me if you know where it is.