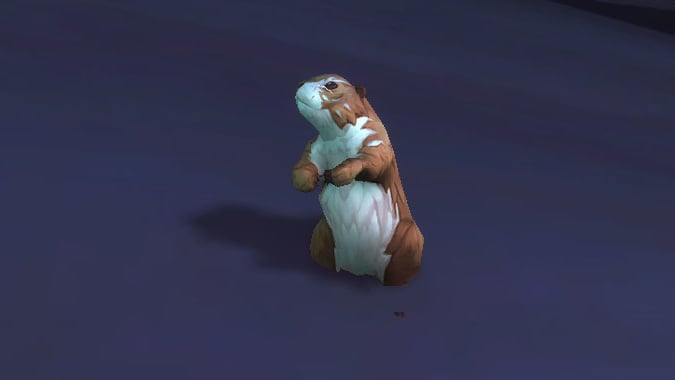 Well, it’s election day again. Yes, I wish I were kidding, too. Here, have this lovely groundhog!

This is The Queue, where you ask us questions and we answer them.

Q4tQ: what ability from other games would you like to see WoW steal for a race or class?

I’m roughly twenty hours into Assassin’s Creed: Valhalla, and I would absolutely love to see rogues get some version of “Leap of Faith” – where you jump from some high point and do a perfect dive into a pile of leaves or a haystack. I’m sure the game could find a way to calculate it so you could only use it if you were jumping from high enough up, so it didn’t turn into another version of Heroic Leap.

Bonus points if using the ability makes a haystack appear where there wasn’t one.

It’s tough to answer questions like this, because I feel like almost everything I’d want in WoW is already here in some form, or else would be pretty far outside the setting, or ridiculously OP. Though I’d love a port of Rock Band-style gameplay, I feel like Bards would be incredibly annoying both to play and be around in practice, for instance. I’d love a spec that involved sniping, above and beyond current Marksman Hunters, but I don’t think that would fit the setting, and having a lot of very specifically targeted skillshots doesn’t really work with WoW‘s control structure and play signature.

Also, because I’m a stinker, base building. If you ask me, “if you could have anything,” that’s always going to be on my list. I’m noticing most of the games I really love digging into outside of WoW tend to have an element where I make myself a house or camp in some form, whether it’s actual construction or just a de facto little corner of the world where I dump all the garbage I can’t help picking up.

QftQ: If I permanently activate a channel location in my Anima Conductor, will that keep me from activating other channels as well?

Nope! You can — and should! –activate another point in addition to your permanent channel. The permanent channel just means you don’t have to spend anima anymore, and you can activate multiple points at once for more rep and doodads.

Q4tNightFae: Do you use soulshape much? If so, are you already a druid? I virtually never use it. And the stuff about Torghast powers reminded me how often the “special” powers are boosts to soulshape, completely wasted on me. (Plus, going faster in there is NOT what I want to do.)

A whole lot, as a Hunter. I’d use it more, especially in combat, if I had a hotkey open to assign it to, but I use it very frequently. It’s great for going between mobs during quests or in dungeons, and it’s indispensible in both the Maw and Torghast.

Also, I spend most of my time in Oribos in Soulshape. There are so many random spaces to enter which dismount you, since you can retain it indefinitely in rested spaces, I just run around in Soulshape, frequently without even bothering to mount.

Q4TQ: how seriously do you intend on playing alts this expansion?

Some of us are big altoholics, and there is a huge incentive to play at least four characters this xpac, due to the four Covenant Campagins. But it feels difficult to keep up with four characters. Some of the catch-up systems we have are great; Renown is really easy to get caught up with. Anima is a different story… but to be fair, Anima is not really “necessary” unless you are interested in collecting everything.

Initially I was super gung ho on going full blast with at least four. I usually maintain at least once character at cap on both sides. But now, there’s still so much to do, both in-game in terms of wizard chores — keeping up with my Soul Ash and Callings and missions and everything else — and in real life, where the chores are even less appealing than fighting off legions of the vindictive dead in order to make a puff of smoke in a fancy tin can hate me slightly less.

Right now I have my main character at cap, basically just maintaining, one alt at 53, and the rest still have to muscle their way through the Maw intro. The Maw intro is a big wall for me — I’m not sure why it’s more of a pain to face down the line where you can hear Taliesin Jaffe’s exhaustion at having to say a terrible pun than it is to just stand there and wait for the dudes in Oribos to have the longest discussion ever, or to do the same damn quests with Kleia again, but I’m just as tired as Taliesin.

Q4tQ: Did you binge watch any shows over the holiday season?

Once Upon A Time. I know.

In my defense, the algorithm on Disney Plus sucks, and this show has a bizarrely strong credited cast… including the voice of Khadgar as Gepetto, funnily enough. The writing is also surprisingly good, with a lot of phrase repetition and particularly thoughtful word use. You just have to get past the zaniness of the overarching plot where Mulan and Aurora are teamed up trying to stop Rumplestiltskin from killing the Seven Dwarves, or whatever.

It’s great for something to pass the time while you’re doing something else, like grind for Anima.