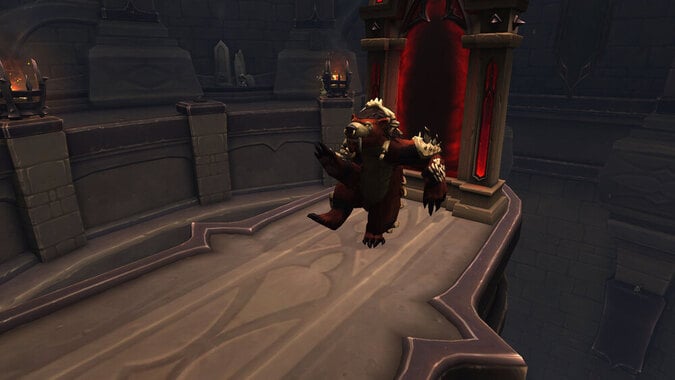 My Guild killed Heroic Blood Council tonight in Castle Nathria, and let me tell you. It’s never not hilarious seeing a bear boogie down during the Danse Macabre. Here we are in the midst of a battle for our lives, and part of my survivability relies on me being able to prance and shimmy with my big old paws. It’s fantastic and I hope that there are more fights in future tiers with fun mechanics like this.

While I work on my sashaying it’s time for — The Queue.

Q4tQ: What’s your favorite of the Renown 40 titles?
Count/Countess
Baron/Baroness
Winter’s Envoy
Hand of the Archon

If I took everything I knew about the Covenants out of the decision, I’d have to say Hand of the Archon. You get to wield all the powers of the Archon, without having to be making Archon level decisions. Plus it’s so evocative in a way that Baron or Count isn’t. You work for an Archon!

Baron and Count are so boring, those aren’t even the highest ranks of nobility. Like if I was going to be any level of British royalty that wasn’t the King, I’d at least want to be a Duke — but let’s circle back to me being King. I feel like I’d be a great king. Winter’s Envoy is a cool title but still doesn’t convey the sense of power I’m looking for in an identifier. You’re basically just a messenger.

QftQ: Do you think Blizzard will let us update our flight master whistle so it works in Shadowlands zones?

I think it’s less and less likely that they will. I thought it wouldn’t be as big of a deal to not have it this time. But after having spent time with Shadowlands — I find myself missing it more and more. It was just so convenient! It was just super nice to have it so if something came up and I had to step away for a few minutes, I could at least leave myself somewhere that wasn’t swarming with bad guys looking to kill me.

Flying is still coming in patch 9.1 as far as we know, so that’s not so far away. BlizzConline is a month and a bit away so we’ll likely be finding out when we can expect that pretty quickly.

A SUPER DOPE XERIANNE FROM THE HOMETOWN

So what is the repopulation of WQs? Like in BFA we had the 12 hr and the 24hr but it seems now if I do 3 WQs in Bastion and then tomorrow it becomes my calling it only has 3 WQs available because I already did 3.

They’ve made a change to make it a little less predictable, but there are usually five World Quests up over the course of a day, maybe six. Not counting the Pet Battle trainers in each zone, where one of them will be active each day. The quests popping up are definitely spread out more though, not all clustered together in two chunks of time like they were before. Just now I can see some at 20 hours, some at 16, some at 6, and a couple at 1 hour remaining.

They’ve been trying to make each World Quest more impactful, as evidenced by how some have so many steps. It’s not great having to hoof it across Bastion to get back to the starting area, charge up an Anima core by killing a whole bunch of Forsworn, power up a giant robot, and then still have to go deal with a mini-boss — all for 70 Anima. If only the rewards matched the new level of effort from some of these quests.

STOP, 6K TIME!
Q4tPodcast: What first got you into Blizzard games? What was that first experience that hooked you? Rock on you two cool dudes.

I played a whole bunch of Warcraft 2 and its expansion pack. When I was growing up my parents had a Mac so my gaming options were pretty limited but there was Blizzard offering me so many great games that would all run on the family computer! From Warcraft 2 I moved onto the rest, but my favorites wound up being StarCraft and Warcraft 3. Warcraft 3 was my first experience with any kind of online gaming and it blew my mind. At least it did when the terrible internet of yesteryear actually let me play. I was a halfway decent Night Elf player and I still remember how satisfying it was to blot out the sun with my arrows. At least until those cheating Footmen got up close and personal, who gave them shields anyway!

I TOLD YOU KALCHEUS, YOU CAN’T TOUCH THIS

Oooh, BW is having a virtual Q&A this weekend with Con Before the Storm!
“Why is your staff so handsome?”

It was a dark night spent playing cards against an odd band of supernatural misfits. I had to ante up my ability to taste chocolate to stay in for the final hand. But when the chips were down I walked away with my handsomeness and also the talent to be able to come up with stories about how people got things. As for Joe, I hear he’s more handsome in real life and he uses a filter to tone it down so that we’re not blinded by his gloriousness.

If you want to see what I mean — here’s the link to the recording. It was a fun time! Joe and I talked about Blizzard Watch past and present. Plus could there be a secret musical-only episode of the podcast coming? You’ll have to watch the video to find out!

Have a great week everyone, and leave lots of questions for Anna to answer tomorrow!