The Queue: We now return to our regularly scheduled programming 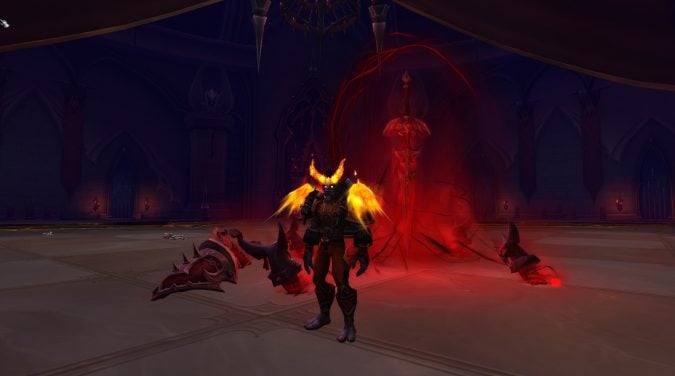 Boy, what a weekend! According to Liz, we’ve had 83 different posts go up in the last few days — that’s so many!!

The only way I knew how to relax after a weekend like that was to go commit a little regicide. Although four pulls before we killed it we had a 0% wipe. Sire Denathrius had 35,000 health left. It was heartbreaking. Which we followed immediately by a 3% wipe. Still, we killed him in the end, and I didn’t even get a sword pet to remember it by or anything!

While I go write a strongly worded letter of complaint, I take you now to — The Queue.

We’re still not even into patch 9.0.5! That’s dropping mid-to-late March, so a month after that for 9.1? That’d be lightning fast. We’ll probably have the 9.1 PTR up and running by April 19, but I wouldn’t expect to be actually playing that on live servers until at least June, more likely July.

I’d probably think huh, that’s a neat idea, and then sigh deeply when I see that it’s $17,000 per coin and I could’ve bought it back when it was $1 per coin.

Why do virtual coins have multiple sides? Aren’t single-sided 2d representations of coins good enough for that? Are there two sides to a bitcoin? Still, if there was a BlizzCoin I’d say it would probably have the Wolf Rider statue from their campus on one side, while the reverse would be a smiling Gallywix face.

Q4tQ: do you think Blizzard would ever choose to end WoW for story reasons?

I know that the usual discussion about WoW ending goes with the idea that they’ll shut it down when it no longer makes money. But I wonder if — you know what, never mind. This was a stupid question. Of course they wouldn’t shut it down for any other reason.

There are a lot of factors that would go into WoW stopping production. Ran out of story they wanted to tell is so far down that list you’d need an entire California Redwood to print enough paper to get to it. One of those big ones that you can drive through. I don’t think that it’s entirely a money decision though, at a certain point they could just be tired of making WoW. We’ve seen other companies just leave well-selling game franchises to languish cough Half-Life cough, or there’s the Bioshock franchise. I know that Bioshock would probably do gangbusters if it came back.

But yeah, you’re right it probably would come down to a big profit/loss calculation.

Q4tQ: Blizzcon was late this year. When do you think they’ll hold the next one? Normally, the con is held in Oct or November, but that seems to close to this one. They’ll want to announce the next xpac.

But if the next con is a year from now, an announcement then we be closer to the release of the next aspect than is usual.

I assume the the con will be held online because this fall or next winter I assume large gatherings will continue to be restricted because of COVID. What do you all think?

I’ve been going back and forth on whether they’ll have another convention this year. If they did anything it’d probably be another BlizzConline like this past weekend. There’s no telling what shape the world will be in by the time November rolls around. It’d be safer for all involved to skip another year of having large in-person gathering aimed at attracting people from all around the globe.

Maybe they’ll choose to hold it earlier in the year to get to it sooner so they could announce late 2022 release dates for Overwatch 2 and Diablo 2: Resurrected.

We may just go a year and a half between BlizzCon’s again though. Two a year feels excessive for any company.

Speaking of Twisting Corridors, I tried a Layer Five last night but ran into a WALL at the 17th floor boss. You guys who have cleared them, what was your ilvl and did you do it solo? What am I missing?

Which I know isn’t the most helpful answer, but when you go in solo you’re putting so much pressure on the Anima powers, and Torghast sections you get to be favorable. You have to get three different chunks of Torghast because if you get two of Coldheart Interstitia the enemies will have so much extra health, it won’t matter how beefy your Doomguard is, they’ll just overwhelm you as they get more stacks the longer they’re in combat.

That’s why I liked doing them with a partner. Having a tank and a DPS class meant that I could focus on tanking Anima, while he could focus on the offensive side of things where possible. It also helped keep us sane, because the run gets a lot more fun when you have someone to chatter with while killing the little weeny monsters. I don’t remember our ilevel when we cleared our runs, but it was roughly 210 probably. I will say though that I definitely noticed that enemy power spike around floor 16. All of a sudden things just started to hurt way more.

YOU’RE MY KALCHEUS OF THE NIGHT

Q4tQ: are you planning to get D2 Resurrected, and if so, which platform?

I’ll probably pick it up to see how closely it matches up to what I remember. I know I beat Diablo 2 and the expansion pack back in the day, but I never got to max level, and I never went wild farming Baal or anything. I’d definitely get it on PC because that’s where I can spend all of my Blizzard Fun Bucks™ that I buy with my WoW gold.

Time to nap for a week! While I’m napping make sure to leave Anna lots of questions for tomorrow!