It’s official — WoW Classic is moving away from being a re-creation of original World of Warcraft and into new territory, even on Classic Era servers. It’s understandable, but it’s still a big change, and one that did not exist in original WoW — a move that I wondered if we’d see a year or so ago. Back then, I wondered if changing Alterac Valley in WoW Classic would open the floodgates for more changes, and now, with the introduction of the Chronoboon Displacer, it’s clear to me that WoW Classic is not a recreation of original WoW any longer. That status quo has been abandoned forever.

The reason for it is one I find interesting and quite well explained in the forum post by developer Pazorax. If you played WoW back in the day, you’ll remember trying to juggle all the various buffs you could accumulate, like Rallying Cry of the Dragonslayer or the two hour Dire Maul buffs for doing a Tribute Run without killing the guards. As Pazorax points out, the way these buffs work, once you’ve managed to get them on your character the ticking clock begins and you may end up wasting precious buff time in transit to or from the raid or dungeon in question, doing maintenance on your gear, or what have you. This leads a lot of players to log off as soon as they get the buffs, for fear of losing them before they get to take them to the raid they got buffed for in the first place.

Yes, this means that players are encouraged to stop playing the game by the mechanic of buff duration on these rare world buffs. Now, Blizzard doesn’t want players to feel forced to stop playing, but they also don’t want to remove these world buffs from the game or anything like that, and so comes the Chronoboon Displacer, an item sold by Chromie in Andorhal that allows you to essentially offload your world buffs onto it, where it will hold them until you’re ready to reapply them to yourself. So if you port to Dire Maul and get the buffs from the Tribute Run, you can “store” those buffs in the Displacer. You can’t go get them again — they’re locked as long as they’re in the Displacer — but you can go about your day playing WoW Classic and save those buffs for when you need them most. 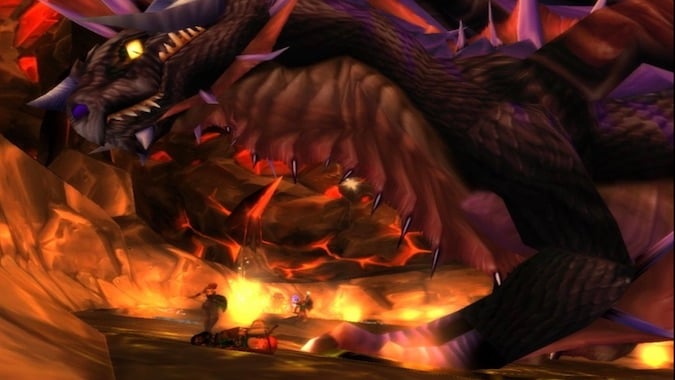 Charge up the Chronoboon and you can keep on playing

This is a change we all probably would have loved back in the day. But it’s also a change we didn’t have back in the day — this is an entirely new concept in World of Warcraft. It never existed and still doesn’t exist in the main game, making its inclusion the first completely unique design in WoW Classic since the Alterac Valley changes. So why did they do it? Pazorax explained in the forum post.

We launched Classic with an intent to keep the game data the same as it was originally, and we wanted to make sure we delivered on that promise, but now that we’ve been through all the content phases we planned before launch, we took a step back to consider what it really means to have the world buff system stay this way in Classic Era. A persistent world where everybody is traveling around for magical items and spells to maximize their power is fine, but one where they then stop playing to avoid wasting them seems wrong. Having an additional stop that lets you “bottle your buffs” seems like a thematically appropriate change to alleviate that problem.

That’s their thinking going into this change. To me, it feels like it’s a change to make WoW Classic more convenient — which is exactly what the people who told me WoW Classic would let them experience the game the way it was were so vocally against. All those quality of life changes were “dumbing the game down” and if that’s the case, this is clearly doing so as well. If you want the real original experience, part of that was logging off because you were afraid you’d use up your Rallying Cry before the raid.

I get why Blizzard is making this change. I just don’t think I agree with it.

But enough of what I think — what do you WoW Classic players think? Should Classic Era get a change like this? Is it better to encourage players to keep playing than to preserve the game as it was?

Blizzard Watch is made possible by people like you.
Please consider supporting our Patreon!
Filed Under: Andorhal, Chromie, Chronoboon DIsplacer, Rallying Cry Of The Dragonslayer, World Buffs
Advertisement