Beyond Barovia: Our favorite Strahd-free domains in Van Richten’s Guide to Ravenloft 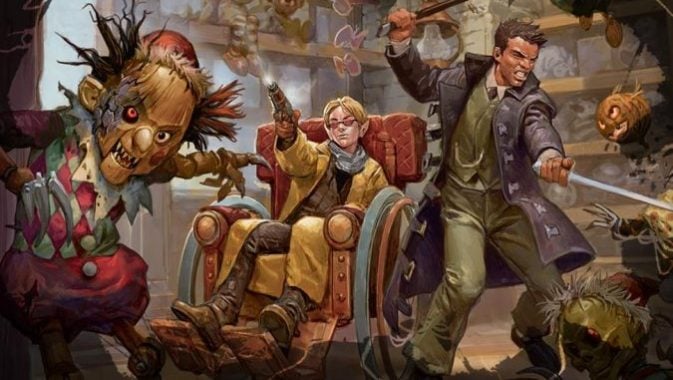 TSR, Inc introduced the world to Count Strahd von Zarovich in 1983 in the module Ravenloft, a Dungeons and Dragons spin on the famous Dracula legend, and he has remained a villainous favorite of players and Dungeon Masters ever since. Now, almost 40 years later, Wizards of the Coast is releasing Van Richten’s Guide to Ravenloft, a full horror setting that builds upon Strahd lore and updates it for 5th edition games. Chock full of new options for the players and tools for the DM, VGR is a substantial additional to the D&D sourcebook library, partnering well not just with the previously published Curse of Strahd but with any setting, even those in a different TTRPG.

But while Strahd’s home of Barovia is front-and-center, it’s not the only “Domain of Dread” described in the book. Sixteen other Domains are fleshed out in full, while over 20 more are given summary descriptions for DMs to drop in as needed. Here are some realms you should consider if you want to shy away from vampires for a bit, or if you wish to treat your players to a Darklord they’ve never encountered before. 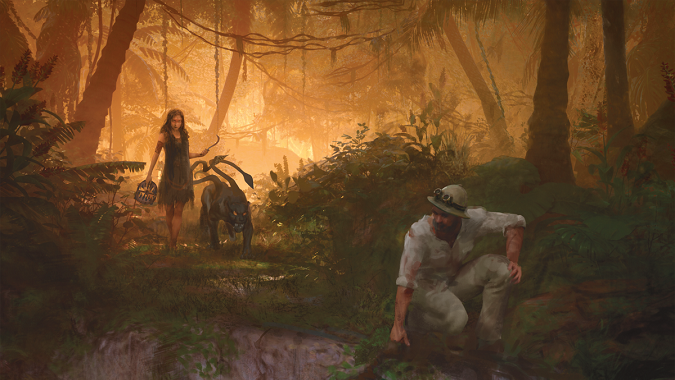 Valachan, the Most Dangerous Game

Valachan is a land of dense jungles and deadly flora and fauna, where the land itself wants to kill you. If it doesn’t, the Darklord of the domain — Chakuna and her roaming packs of displacer beasts — are there to hunt you down and do it instead. A werepanther without a heart, Chakuna has ties to the land much deeper than the players may suspect, and getting caught up in the “Trial of Hearts” can make the Hunger Games look like Candyland.

Amidst all the struggle for survival there is a society and typical array of adventuring opportunities, so players may find it not all that different from their normal setting — at least until the vines start to wrap around their ankles. 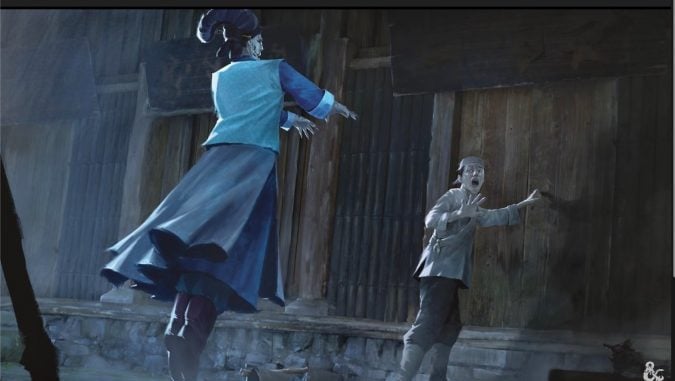 I’Cath, a choice of nightmares

I’Cath is a city of squalor haunted by ghosts and a few desperate waking souls scrounging for food amidst the deteriorating buildings and those that sleep. Propped up on walls or collapsed on the floor, the sleeping are trapped in the dream of the Darklord Tsien Chiang, forced to labor without respite as they fulfill her vision of a golden city. Death within the dream provides no true escape, as they return to the decrepit real world where food is sparse and staying awake at night may keep you out of the dream but makes you a target for Tsien Chiang’s ghostly servants. Escaping the city isn’t easy either, as those servants reconfigure the environment nightly to match the dream of their Darklord.

What’s great about I’Cath is that it’s not a permanent dual state — each night Tsien Chiang rings a bell to ensure her dream continues, but there’s enough opportunities for adventurers to disrupt the Domain in ways that can provide for some clever encounters for them to navigate. It’s also easy to build up horror when the players arrive to find the town mostly asleep and having no idea what is happening. Whomever takes first watch that night might find themselves surrounded by unawakenable companions. 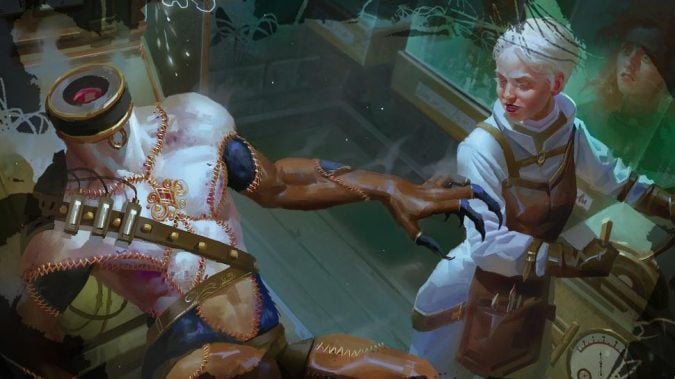 Viktra Mordenheim, the Darklord of Lamorida, once crafted the Unbreakable Heart — a non-magical device that replaces your real heart and keeps you free of disease and aging. Installed in her dying companion Elise, she shortly thereafter lost both, and her particular torment is being unable to find either.

Lamorida itself is a land of constructs, laboratories, and mad scientists, with experiments aplenty and a steampunk flair. Throw in an inhospitable climate akin to Rime of the Frostmaiden and your players may need to “upgrade” themselves to survive. 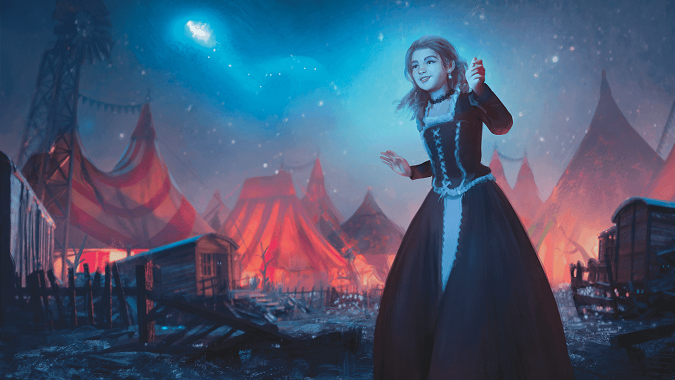 The Carnival — the Darklord is a sword

That’s it. That’s the whole appeal of the Domain.

For those who need more than just that to recommend it, the Carnival continues the trend of turning the local circus into a place of horrors. What’s clever about the Carnival (besides the sword) is that the Carnival itself isn’t really the source of conflict for the adventurers, as the travelers are a loyal band. It’s what the Carnival generates around it — fey hanger-ons, citizens and Darklords concerned about its presence — that leads to encounters for the players. It also can travel among the Domains at will, so earning the trust of Isolde, the leader of the Carnival, may assist your players in escaping. 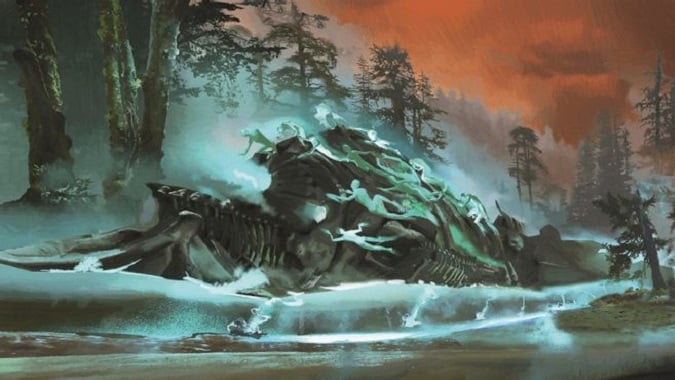 A train of passengers that attempted to escape the unfolding calamity upon Eberron, the Cyre 1313 is populated by the dead trapped in that moment of attempted escape — their fear of the imminent disaster is joined with their fear of the Darklord whose arrival delayed their departure, ensuring their deaths. The Mourning Rail is an excellent method of moving between Domains of Dread as it’s constantly traveling between them — perhaps the players think it’ll be the best way to escape Barovia or I’Cath, only to find themselves among an even more paranoid threat.

One of the simplest concepts among the Domains, the Rider’s Bridge exists within and between numerous domains each with their own Darklord. Ravenloft’s take on the Headless Horseman can be tailored to any campaign, being a way for the players to get in or out of the Domains of Dread, or to add a little bit of “fun” traveling within one. The generic nature of the encounter gives the DM a lot of room for creativity in designing and implementing it.

Klorr — the Domain at the end of the universe

Klorr is where the Domains of Dread go to die. In the center is a burning eye, and every hour one of the floating landmasses in this realm gets pulled in to its doom. Those trapped on one of these islands can only watch as each hour they move one step closer to their end. Death is not guaranteed for a party of adventurers, but with a literal ticking clock of a universe they’re going to have to think fast if they’re going to escape in time.

These are just a handful of the Domains available in Van Richten’s Guide. With over three dozen ideas — along with guidance how to create your own Domain of Dread — there’s plenty of variety for you to play with.

Blizzard Watch is made possible by people like you.
Please consider supporting our Patreon!
Filed Under: D&d Sourcebook, Ravenloft, Van Richten’s Guide To Ravenloft
Advertisement