Lately I’ve been thinking about what it’s like to play as a new player, something I haven’t done in years — I started playing RPGs when I was nine years old, in 1981. But I’ve run games for new players, including my lovely and talented wife, and so after a discussion with her about what she would tell other players about starting to roleplay their characters, I felt like I could give y’all some advice.

A lot of the posts I write are advice for DMs. This is because I DM a lot, and when I do, I tend to think about DMing, about how I can do it better, about mistakes I’ve made — oh, so many mistakes — and what I’ve learned from those mistakes. Those posts serve as a gift I can give to you so you don’t have to make those same mistakes I did. But there are more players of RPGs than DMs, just by the basic nature of the game — there’s only one DM per most games, although I have been in sessions with two DMs a few times.

So here’s some advice for the non-DMs, about how to start playing your character if you’re new to D&D, or any RPG. Not how to play the game itself — we have a D&D 101 post for that. This is for people who want to get comfortable with the role play aspect of the game — how to pretend to be someone else with some friends to tell a fun story.

First up, when you come up with a character concept — say you really like the snarky hero who quips their way through danger, like Lara Croft or Rick O’Connell — remember always to keep in mind you won’t be playing this character alone or in a vacuum. Playing an RPG is an inherently group activity. You are playing the game with at least one other person, and likely more than that, and you should always keep in mind the comfort level of your fellow players. This extends to the way you choose to play that character and their actions. Perhaps you rolled a Rogue and you wanted to make that character a kleptomaniac. While it might be in keeping with your character concept to steal from your fellow players’ characters, remember that this is a choice you’ve made, and just trying to cover it by saying but it’s what my character would do doesn’t fly. Your character isn’t real, but you are, and you’re the one choosing to do something that you know might upset the other players at the table.

This is not to say this can’t ever work, or be a good story hook, but it depends on your group and your comfort level with one another. If you’re new to the game, or the group you’re playing with, it’s not usually a good idea to immediately go for a hot button topic like messing with their stuff, much less more sensitive topics. For both players and DMs it’s worth thinking about consent in gaming — there are topics that some players simply cannot or do not want to explore safely, and as a player you should respect your fellow players as you would hope they’d respect you. This is something the DM should be thinking about, of course, but the DM isn’t in control of you, and you’re capable of making a choice while playing that hits on someone’s triggers without even meaning to. When that happens, stop the game, apologize and work to redress the situation.

Also, don’t overdo it. This is one of the hardest pieces of advice and something I fight in myself — sometimes, I just end up hogging the spotlight and I have to rein myself in. You can listen to me playing in Joe’s Otherweald campaign if you want to get an example of me sometimes getting ahead of myself and needing to calm down and let other players do their thing. At the same time, however, you do have to put yourself out there in order to roleplay at all, and it can be a tricky balancing act — as long as you’re mindful of your fellow players, I definitely want to encourage you to try and figure out what your character’s voice is and how they view the world through roleplaying.

You are your own player

Actual play streams and series are a big way a lot of new players discover roleplaying games, whether it’s Critical Role or the Oxventurers or The Adventure Zone, or newer games like the Black Dice Society campaign I’ve recently started watching myself. Now, I think it’s awesome that people love to watch streamed D&D now, it’s the kind of thing young me would never have even believed possible.

But please, please listen to me now.

You do not have to be a talented voice actor, or a gifted improviser, or a person with a lot of experience and stage presence to roleplay in an RPG, and if you start and feel like you’re not as good as the people from your favorite D&D stream, that’s perfectly okay. More than okay, it makes sense.

Many of the people on these streams have years of experience at either playing the game, are actual talented working actors, or both — you may not be any of those things, and that’s okay. Not every D&D game has to aspire to be grand epic storytelling with masterful acting. I’ve been playing for years and I will never be Taliesin Jaffe or Laura Bailey or Liam O’Brien, and that’s okay. I still have fun, I still try and play new things, like a robot monk who is search for enlightenment, and even if I don’t put in an award winning performance, that’s just fine. 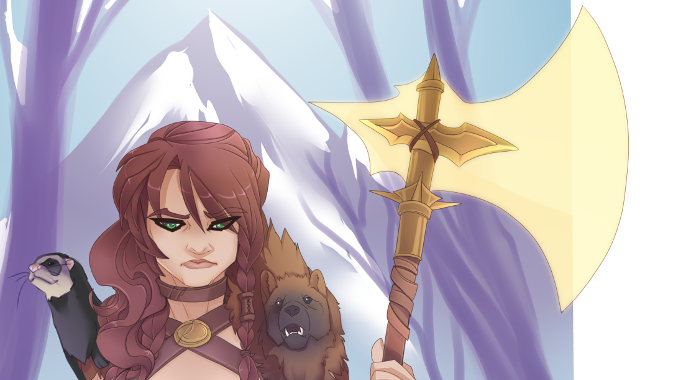 Roleplaying at its heart is just playing pretend, except instead of you pointing your finger at your friend and saying bang and them denying you hit them, you have dice and rules to decide who gets to go first, whether or not that bang actually did anything, and so on. That’s really all there is to it. You can play the game and have fun just doing the bare minimum — rolling up a Human Fighter named Your Name Here and just rolling the dice and staying quiet when any of the talky parts come up. I am not criticizing you if that’s how you choose to play the game, as long as you’re having fun and nobody else has any problems with you, please play however you like.

But if you do want to start trying to be something distinct from yourself — if you want to start playing pretend — it really isn’t any more complicated than pretending to be Spider-Man or Wonder Woman or Rey in your backyard. When you create your character, you make choices like what race they are, what gender they are, what class they are — in essence, even if you do make a Human Fighter named Your Name Here? That’s still not you. You don’t like in a magical fantasy world with Dwarves and Elves and Goblins and Orcs, you probably don’t go around fighting Dragons all that often, almost nobody spends a lot of time in the company of Wizards and Clerics nowadays.

So to start playing Your Name Here as a unique character? Start thinking about how they feel about things they’ve done and seen. Talk to the DM about the world, see what ideas they have about what would work best for you. What does your character think about magic? About monsters? About people like Dwarves and Elves? Where did Your Name Here grow up? Do they have any family? Maybe you could give them a slightly different name, one that isn’t just Your Name Here, but a variant — like, let’s say, Mathayeus for the sake of the post. You decide that Mathayeus is the eldest of six children because you were an only child and you want to explore that difference. Mathayeus left home as a young adult to seek fortune and fame in the gladiator pits of Big Campaign City, only for the new Emperor to ban gladiatorial combat after Mathayeus’s third bout. With no other profession to hand and not wanting to enlist in the army, Mathayeus decided to start freelancing as muscle for hire and fell in with the local thieves guild — if you have a friend playing a Rogue, so this way, the two of you can have a connection before the game starts.

And just like that, you’re roleplaying. You start off with some basics, think about how your character would react and where they come from, and with a little help from your DM — and trust me, your DM is dying to talk all about their campaign, they will literally drop everything to tell you stuff you can use in your backstory — you’ll soon know who your character is, what they want, and how they got to be adventuring.

Also, make use of books like Xanathar’s Guide to Everything if you’re really stumped for background information and have no ideas for your character — it’s got an amazing section full of random dice rolls you can do for stuff like your parents, your family situation, things like that.

You can absolutely do this. It’s really fun, and you will pick it up fast. It’s make believe with dice, that’s the real joy of it, it’s telling stories with friends with randomization so you don’t know exactly what’s gonna happen next. Get out there and play that Tiefling Life Cleric who loves tea and kittens and who blows up people who cross her (or her kittens).

Blizzard Watch is made possible by people like you.
Please consider supporting our Patreon!
Filed Under: D&D 101, New Player, Roleplaying, Seriously Don’t Try And Be Laura Bailey
Advertisement