The Queue: Photo modes are the best thing in gaming, change my mind 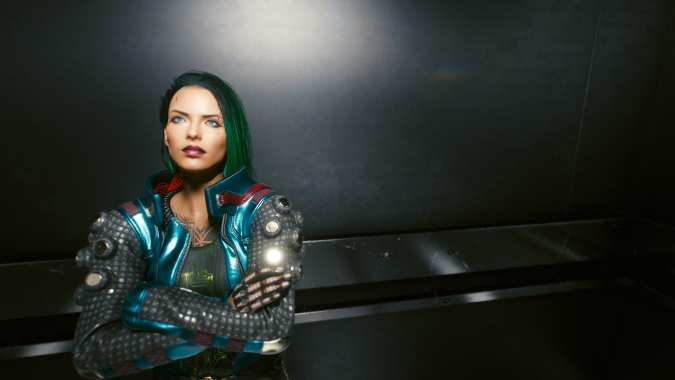 You can’t, because I love photo modes. Absolutely love them. Loved them in Odyssey, in Valhalla, loved watching what people did with them in Spider-Man, and I’m currently abusing the heck out of them in Cyberpunk 2077.

This is the Queue. I love photo modes. Go ahead, say their power has corrupted me. I care not.

Q4TQ: what is “corruption” for a character? What does it take for us to consider that they’ve been “corrupted”? A change in personality? If the character still behaves in the same way as they did before they got whatever corrupting power they got, are they corrupted, or not?

Was Illidan corrupted? Was Arthas? Was Garrosh?

As is often the case, I’m forced to go back to the words of Kreia from Star Wars Knights of the Old Republic 2, because she’s one of the best villains in RPGs. If, as Kreia postulates, Redemption is a form of spiritual collapse, as it means surrendering the viewpoint that led you to require being ‘redeemed’ in the first place — an argument I’m not entirely convinced by, but I do find interesting — then corruption would require a similar collapse.

To be corrupt is to abandon a treasured outlook, divest yourself of the things that you once held dear, to break from old mores and old, once cherished ideals, and to do so either for the sake of or due to the influence of outside forces — a lust for power, a quest for domination, or to obey the directives of something outside of yourself that demands you obeisance.

Illidan was not corrupted, because he never abandoned his viewpoint. It could be argued that he was an evil person, certainly, but he was neither seduced by power to abandon who he was nor did he give up his ideals for it — indeed, he held fast to his beliefs even in the face of his people’s utter abandoning of what he held most dear. Illidan hungered for power, but even then, never power for its own sake but rather power for what he could do with it — an ‘ends justify the means’ morality was Illidan’s motivation and he never wavered from it.

Arthas, on the other hand, absolutely collapsed. He found himself moving step by step down a path that required him to abandon his once-dear ideals in the name of the power he sought to vanquish the evil that threatened his people, until upon taking up the runeblade he was no longer the man who’d cared so much about their welfare. As a Death Knight, he in fact brought about the very destruction of his homeland he’d originally wanted to stop. I would be willing to state that Arthas was corrupted, that he allowed himself to lose sight of who he was, and in the process became someone else.

Garrosh? I don’t think he was corrupted, no. Belligerent, willing to do anything for victory including using tactics others would decry? Absolutely. Obsessed with one shot victories that required unusual tactics and sneak attacks with unconventional weapons? Absolutely. But corruption would have required that spiritual collapse, and Garrosh never had one.

That’s my take on it, anyway.

Lore Q4tQ: we know that Blizzard’s writers love corruption storylines – it happens a lot in WoW and Diablo, and I’m guessing it’s happened in StarCraft too. (Not sure about Overwatch, but…) Is there any instance of a character who delved into corruptive magic/science/whatever and used it, but didn’t go crazy and evil? I’m curious if there’s anyone who pulled themselves back from the brink, or if just dipping a toe into the wrong end of this particular pool means you’re doomed.

You could argue that Sigma is this trope in Overwatch.

I listed two above that you could argue do exactly what you’re suggesting. Illidan not only uses Fel magic, a notoriously corrupting force, but he created an order of Demon Hunters that do the same. Some of them end up corrupted, and fall into self destruction or even defect to serve the Legion, but overall the Demon Hunters use corruption to fight corruption. The Demon Hunters in Diablo do much the same thing, using artifacts from Hell itself to do battle with the Demons.

And Garrosh directly channeled the power of the Heart of Y’Shaarj to fight the adventurers that had come to stop him without ever falling into the service of the Old Gods. Love him or hate him, he saw that power as a tool, and a tool only — he had no desire to serve anyone.

It’s possible Alleria Windrunner also counts, as she so far doesn’t seem to have fallen to the Void, but we’ll see how that goes.

Q4tQ: In the past gold use to be one of the larger player grinds. It controlled the pace of the players. But with WoW tokens you can pretty much buy anything in the game. Pets, mounts, toys, and content carries are all bought with gold. Your pace is only limited by the size of your wallet.

The amount of Anima that you can earn is controlled by a weekly allowance. It controls the pace of the game. You can’t buy it with gold. You have to grind for it like you once did gold. It does have a greater role play feel then buying gold with your credit card. I think it’s a good way to balance the game out. My only change would be to remove the weekly cap or greatly increase the amount of Anima you can earn.

Do you think that Anima as a replacement for gold is a good way to control the pace of the game?

Ultimately, no, and neither was gold. In a perfect world, the game itself would control its own pace, but the player base seems incapable of truly being controlled in this manner. There will always be players willing to do anything to accelerate the pace of content consumption — guilds running multiple raids a week on their alts to power through Heroic and Mythic raids, for example, or selling carries for the gold they need to acquire the vast amount of consumables and AH epics to speed that consumption up.

Remember, back before the WoW Token, gold wasn’t really a limiter. All the WoW Token did was take the control of the in game economy away from gold farmers. Look no further than WoW Classic for what an economy without the token can look like — in some cases so bad that players attempted to soft reboot their in game economies by starting over on new servers. I knew a lot of players back in the day who bought mounts and carries with gold they got from gold farmers, and who were always surprised and aghast when their accounts got hacked and all their gold was stolen by, yes, the same people who sold gold in the first place. The token didn’t create that, it just took it away from the grifters.

So I’d argue your premise is faulty, personally. I don’t believe Gold ever really served as a limiter in that way, and that Anima doesn’t really now, either. Most people who find Anima constraining just kind of hit the cap and move on with their week.

Q4tQ: Does anyone else think the story of Starcraft 2 would have worked better as a Mass Effect style trilogy? Personally I would have told the WoL story from Valerian’s point of view; with Raynor becoming an ally sometime in the second act when you learn he’s the guy Tychus teamed up with to get your artifacts. Act 1 involves Valerian and Nova investigating the death of a alleged traitor and high-ranking officer that Mengsk assassinated. With the two determining that they were loyal, Mengsk had them killed in a fit of paranoia.

I mean, it was a trilogy? Unless you mean as an RPG instead of a RTS, in which case yes, I would have greatly preferred it as an RPG.

Odd Q4tQ: If you accidentally buy the wrong type of food, will you eat it just because you spent money on it, even if it is a flavor you absolutely hate?

Blizzard Watch is made possible by people like you.
Please consider supporting our Patreon!
Filed Under: StarCraft 2 Was A Trilogy
Advertisement