The Queue: Imagine me and Queue, and Queue and me 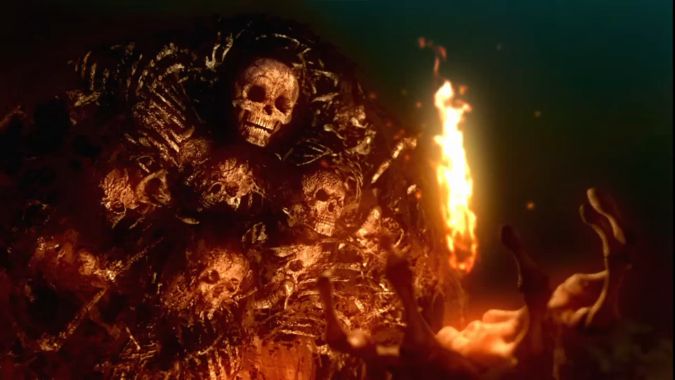 How we all doing today? We’re close to patch day now and… well, I’ve been away from WoW for a minute, so I’m hopeful it draws me back in. In the meantime, Dark Souls and Overwatch have been keeping me pretty entertained.

What’s the craziest race you can design that could also be playable in game? Energy beings like the ethereals? A race whose racial let’s them change appearance on the fly and increases dodge chance because other races can’t comprehend their true form? Something that’s actually crazy and new?

Well, if it has to be playable, that (probably) eliminates a few options out there, but I think we could still have fun. In the vein of Abominations and my pals the Necrolords, what if we had a race that was a bit of an amalgam of loosely-fitting body parts? BUT! Those loose body parts actually have a gameplay element to them.

Over time, you’ll become a crazy mix of the creatures you’ve killed… but the more you add onto your body, the slower you get. You can then “shed” your additional body parts to do an explosion of all the new limbs you’ve added, dealing AOE damage, removing your speed debuff, turning you back to normal, and of course, sending limbs flying everywhere.

GLOWING METEOR CARROT TAKES US IN A DIFFERENT DIRECTION:

A Warlock and a Priest are playing a high stakes card game, which class would be better at cheating?

The Priest, because no one expects them to cheat.

WE GET A QUESTION ABOUT ORDER FROM CORY:

When you’re writing a thing, do you sometimes write the ending first? Or do you always write in the order it’s intended to be read.

Which is better — Foxes, Lynxes, or Hyenas?

I feel like you’re giving me a trick question here. Foxes are super cute, but lynxes are cats, and I love cats. Still, I think I’m gonna have to give it to Foxes here, since I’ve never known a lynx to write about Shadow Priests.

I almost never write in the order something’s meant to be read. Introductions are a weak point for me, so it helps to form everything else, that way I can tailor my intro to what I know I’m going to talk about — it allows me to throw in references and callbacks and throughlines more easily. Plus, sometimes it just helps to start writing, no matter where that may be.

MUSEDMOOSE TAKES US TO D&D:

Granted, I haven’t played either in campaigns, but my impression of Warlocks is that they can only cast Eldritch Blast for a long time, and then can do some REALLY cool stuff really late in a campaign. I don’t know much about Sorcerers, but I know they have more spells. And even if I rarely change what abilities I use on the reg’, I still like having a variety of options.

Q4tQ: Are we long overdue for a resurgence of dinosaur related horror games?

A resurgence? Nah. But one or two really solid dino-horror games? Heck yes!

At the end of the day, I’m a fan of horror. (For the most part) it doesn’t matter what kind of horror, as long as it’s done well. A dino-horror game would admittedly be a bit difficult since a lot of dinos are loud as heck (don’t fact-check me on this, please) — but if it’s done well? Gimme!

Actually, just hire Rossi as a consultant. He’d know what dinos to include to make it absolutely terrifying.

SPENCER MORGAN, HAVE A MITCH COIN™:

How many times have you already lived through the events in this timeline Mitch? Does anything ever change?

If things change, am I really living through the same timeline more than once? Or am I just living through multiple timelines, one time each? Furthermore, how do we define “change”? Is it a change from the previous timeline? A change from the original timeline? Or is “change” relative, and each timeline is running on its own set course of events, different from one another but never “changing” from their intended course?

ARTHONOS CLOSES US OUT WITH ONE MORE:

How much of your interest in Shadowlands hinges on the story direction 9.1 takes, especially regarding the major characters like Anduin and Sylvanas? Will your view of the expansion shift to be more or less favorable, or will it remain unchanged?

My interest in the game at this point hinges more on gameplay than on the story. I love the story and I’m incredibly invested in the characters, but if it takes a turn I really dislike… well, I’ll still play the game provided I’m still having fun doing actual game things.

But if the gameplay isn’t thrilling? I can keep up with the story without sinking a ton of time into the game.

All in all, I have a hard time being too critical of Shadowlands. Or rather, I understand the criticism (and agree with a lot of it), but I empathize with Blizzard for doing everything from home and still trying to make original deadlines. The pandemic has clearly slowed things down, and I feel like content droughts are easier to latch onto in retrospect than content itself.

If my level of interest in Shadowlands stays low and Blizz can bring me back for 10.0? Then I’ll remember it as the expansion where I let myself take a break and experience a lot of other really enjoyable games.

That’s our Queue for today! Enjoy the weekend, and I’ll see you again in 9.1 land!

Blizzard Watch is made possible by people like you.
Please consider supporting our Patreon!
Filed Under: Dark Souls, Nito
Advertisement