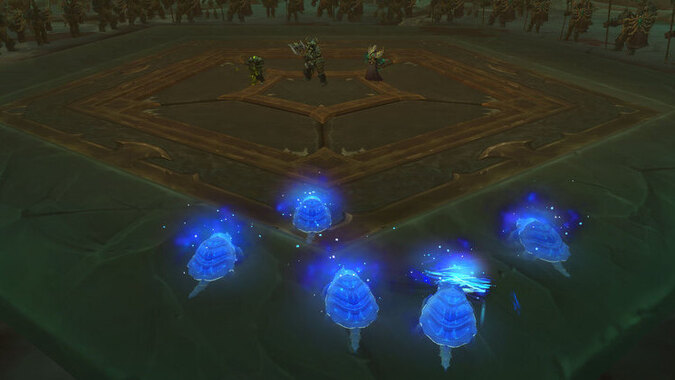 Who let all those turtles into the Theater of Pain?! Those aren’t fearsome gladiators, they’re just turtles man! I sure hope that nothing bad happens to them. Although I’ve seen what a snapping turtle can do to a watermelon, somebody better warn the Maldraxxi inside…

While the turtles are busy snapping their way through the Theater, it’s time for — The Queue.

YO! IT’S THE KALCHEUS MACHINE, GONNA ROCK THE TOWN WITHOUT BEIN SEEN

Q4tQ Do you think Taylor Swift will release any new albums before finishing her “Taylor’s Version” rereleases? And do you think her next new album will be stylistically closer to folklore, Lover, or a new direction?

But from everything I know about the situation she’ll most likely keep putting out the remasters of her earlier songs. If I was in her position I’d want to make sure that I had versions that I had the rights to asap. I hope that anything she does after that is in the same vein as Folklore. I listened to the album when I was choosing a Mitch earworm, and I dig her sound on it. So y’know, more of that would be great. Also no body, no crime is so fantastic, if she just wanted to do a whole album about murders and true crime — I’d be down.

HAVE YOU EVER SEEN MUSEDMOOSE GET DOWN, SLAMMIN AND JAMMIN TO THE NEW SWING SOUND

Q4tQ: why aren’t there more quests that involve the PC being flung from a catapult? I’m also willing to accept riding on a ballista bolt or being shot out of a cannon, but I feel like we don’t do nearly enough ridiculously dangerous travel these days.

Have you seen the way some of the Kyrian carry people? I’ve had fists through my body, been picked up by the scruff of the neck, or just grabbed by the face! That is 100% an unsafe mode of travel.

We have gotten used to a generally safe method of travel though, you’re right. Everything has been grappling hooks, we really need the Goblins and Gnomes to step up and invent some weird catapult that launches a cannon so that at the apex of the catapult you get launched even further. The Jailer wouldn’t know what hit him if all of the sudden players started raining down on the top of the Sanctum of Domination.

YEAH, EVERYBODY LET’S MOVE, KALCHEUS IS HERE WITH THE NEW JACK GROOVE

Q4tQ Should the hand mounts be flying mounts?

They could put their hand flat and fly like they were imitating an airplane, They could ‘flap’ their thumb and pinky to get lift. They could just run in the air like the magic horses do. Wings could come out of the wrist saddle.

The possibilities are endless, or at least many. I feel like in FF14 they have a hand mount that flies and carries you around by the scruff of your neck. (Would that be dangerous enough for you MusedMoose?) But I could be wrong on that, the only mounts I really know for sure that are in FF14 are the giant whale, Chocobos, fatter Chocobos, and the fat cat. Honestly, why would anyone ride anything other than the fat cat?

Q4tQ:
Have you ever played Mount & Blade?

If yes, how fun would it be to have that combat system st … I mean, borrowed, for WoW?

If no, then you should.

I haven’t played it so I went and looked up the combat. It does look more action-y than Warcrafts is. I’ve always really like Warcraft combat though. Sure if they were making it as a game now instead of in 2004 it’d be different, but there’s something very charming about how it controls. Weird edges and all. Even if I spent the evening cursing how knockback effects work all night while we were trying to kill the Remnant of Ner’zhul. Man, I wish I was a Demon Hunter tank for that, double jump clearing all outside momentum is overpowered — and I want it.

FUN GAL ROXXII YOU BETTER RUN AND HIDE, BECAUSE ONE DAY YOU MIGHT NOT SLIDE

Q4TQ: Is it just me or is the proximity aggro for all new 9.1 content for mobs in combat with other things than yourself way too high?

It’s not just you! They also don’t seem to stealth, so all the things I would normally sneak past are just itching to introduce themselves to me.

I understand it though. If I was a random Mawsworn going about all of my Mawsworn business in Korthia, would I want to attack the big scary Maw walker who I just saw take on 15 Shardhides and three devourers — or would I attack the little Shardhide cub with them?

SO CHOOSE, YOUR WEAPON BUT DON’T SLIP, CAPTAIN CAKEWALK, CRAYON DERP’S IN CONTROL WITH THE FLEX OF THE MIC GRIP

Have you ever played a game and then, without realising it, tried to use that skill in WoW? I’ve done this so many times that it’s almost embarrassing and my most recent one would be Gravity Rush where you can manipulate gravity which meant in WoW I was constantly trying, and failing, to do just that… and I went splat more than once!

All the time after playing games with dodge dashes, double-jumps, or rolls. Which is fine if I’m playing my Demon Hunter or Monk. But since I haven’t played them since Battle for Azeroth or before… I’m not fine!

Also, none of my characters have anywhere near the Telekinetic mastery that Jesse Faden in Control had and I just want to throw some rocks and vases at the Forsworn. Telekinetic class when Blizzard?

Of the fights you’ve done so far on Heroic/Normal Sanctum, which have you enjoyed the most, and which has annoyed you the most?

I really like the Tarragrue fight. I’ve already wiped my guild once by taking the knock-away people who touch you power — and I’ll do it again! But getting those Anima powers really makes for a fun time, even the 10% Tarragrue goes berserk phase and then proceeds to turn the tanks inside out isn’t enough to sour me on it. I actually managed to hold it for a few attacks tonight, so I have a goal to shoot for next week.

Least favorite so far is probably Remnant of Ner’zhul — knockback/off the platform mechanics have never felt especially fun for me. They are so pass/fail and he still does so many other things while they’re going on.

We haven’t gotten past Painsmith Raznal on Normal, or Remnant on Heroic though so ask me again in a couple of weeks when I’ve had a chance to see “Yo dawg, we heard you like Kel’Thuzad so we put a Kel’Thuzad in your Kel’Thuzad, so you can kill Kel’Thuzad while you kill Kel’Thuzad”

The Mythic Race to World First starts tomorrow and I’m very excited to watch that for the rest of the week. Don’t forget to ask Anna lots of questions for tomorrow, and tell your pets I said “Aren’t you just the handsomest, yes you are.”