Blizzard has updated how the mount from the Fallen Charger drops 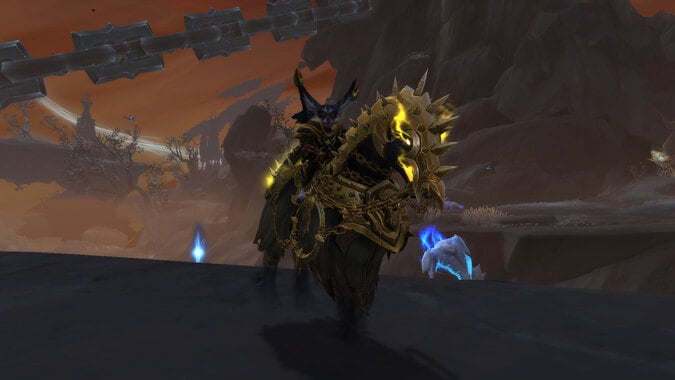 Chances are that if you’ve looked in the premade group finder since the release of Shadowlands patch 9.1 you’ll have seen a bunch of groups listed for the Fallen Charger. This new rare spawn horse would take off on a mad dash through the Maw until it reached Korthia and despawned. It looks great and has an amazing burnished gold appearance to really make the new gear from the Sanctum of Domination pop.

Sadly for a lot of people, they were spending all of their time in the Maw either in groups just waiting for it to spawn, or applying to every group that was listed for it because there was no limit to how many times you could potentially get the mount from it each day. Now in a hotfix to the Fallen Charger, Blizzard has changed the way the mount drops and limited how often you’ll be able to loot the mount per day.

We’ve read feedback from players and observed in-game activities that have led us to see that the Fallen Charger could be better configured.

The initial design intention with Fallen Charger was to make it similar to the Time-Lost Proto-Drake, but that setup didn’t match how other rare spawns behave in Shadowlands, so we changed it on the PTR to work like other rares, where players would want to organize to defeat it because the drop chance would be meaningful enough to warrant doing so.

However, there’s a growing sense of frustration for many as the mount currently feels like something that requires repeated and constant grinding in Group Finder. So with a hotfix that is going live soon today, we’re making three updates to the Fallen Charger:

Thank you for all of your feedback on this.

I know that I’ve definitely spent a few hours in the Maw over the last few weeks just trying to find groups where the Charger had begun its run. It was almost becoming a zen-like experience, where I would just run circles around the River of Souls and refresh the group-finder while listening to podcasts. Still, I’m not sad to see this change, having a single chance at the mount per day will definitely make it feel less like I’m missing out by not spending all of my time hunting for it.

It was nice to see the community (mostly) work together nicely to maximize chances at this mount too. I saw lots of groups arrive at the Fallen Charger and just tag it once to allow the rest of the people a chance to arrive. Sure there were some jerks out there who listed bad groups, or trolled — but for the most part, I just saw people working together to get a cool golden undead horse mount, and that was nice.