The Queue: I love goooooold 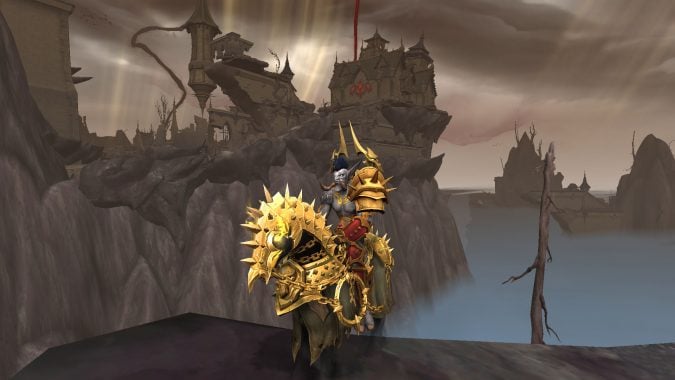 I got the Fallen Charger mount! So I immediately made up a new transmog set to go with it. Luckily the new cosmetics from Torghast really match, especially if you can reach the Adamant Vaults and get the golden versions of them. I do wish we’d gotten complete sets of armor rather than just the back pieces and shoulders, but I’m still really happy with how this look turned out.

While I try and figure out what you feed to an undead nightmare horse, it’s time for — The Queue.

I just realised that the voice actors for Arthas and for Garrosh are THE SAME PERSON.

That’s the mark of a truly talented voice actor! Darin De Paul is all over Warcraft but unless you knew that he’s both Blackhand and N’zoth already, you’d never guess it! Or at least I wouldn’t, maybe you would. I mean you can pretty much just guess Darin De Paul, Matt Mercer, Chris Metzen, or Steve Blum for any dude voice in Warcraft and have a non-zero chance of getting it right.

The voice that I still to this day can’t believe it comes from the same person though is comparing Ashley Burch’s performance as Aloy in Horizon: Zero Dawn to her work as Tiny Tina in Borderlands. They’re so different!!! You cannot convince me that it’s the same person, it’s just not possible.

I FEEL A PREMONITION KALCHEUS IS GONNA MAKE ME FALL

Q4tQ Do you think we’ll ever get new loading screens for Kalimdor and the Eastern Kingdoms?

At this point they’re so out of date we really should! I’m not sure who’s more out of place on the Kalimdor one — Thrall, Gallywix, Vol’jin, or Cairne. It’s time for an update! Let’s get Zappy boi, Gazlowe, Baine, and it might be Thrall again? We should really figure out who’s in charge of the Orcs now…

The other reason these loading screens need an update is that they’re still not fully widescreen art! That’s bugged me for as long as the widescreen art was added in Legion. It’s been three expansions since then, why can’t there be an art pass to update some of the major locations to take advantage?

BfA was definitely not my favourite expansion, but the Tortollan are brilliant. Every time I vendor something on the longboi mount, and then the guy dismisses me with: “Not everything in the ocean is a good-looking or nice-mannered as I am,” I just want to hug him. Brilliant lines and voice acting. I haven’t come across anything equally ingenious in the SL so far.

The Stewards are that for me. Everything they do is fantastic. I’ve loved them from the instant I got into the Shadowlands beta last year. I literally pitched this gallery to Liz within 10 minutes of loading into Bastion for the first time. And that was before they even had their voice lines!

Pure gold. The Blizzard dev who came up with them saying that when you left their conversation windows deserves a raise and a nice big cake. I love all of the different wacky Stewards, I love them being stacked on top of each other, I even love the giant murderous ones in Torghast that are carrying around someone’s skull.

The Dredgers are fun too.

Q4tQ, sort of: My bag is full of weird items with some kind of witty flavour text that tells me exactly nothing about what its use is. Does this only happen to me, or does everyone else know magically what every key opens, and every part slots into or combines with? Gah.

I love things like that! I ate the Questionable Mawshroom right away to see what it did. That’s half the fun. Turns out it makes you see the Jailer and his minions everywhere!

As for the truly inscrutable things if I can’t figure it out right away it’ll sit in my bags for a day or two, and then I’ll finally remember to check Wowhead to see what people are saying about it. If you’re getting a lot of things that seem like they might fit together, that means you might be on your way to a secret! Secrets sometimes have mounts, and I love those things! A strange amount considering I almost always use Travel Form, but hey sometimes a Druid likes to have options.

Of the fights you’ve done so far on Heroic/Normal Sanctum, which have you enjoyed the most, and which has annoyed you the most?

I’m bringing this back because we cleared the rest of the raid on Normal last night so I do have some thoughts about the four bosses of the upper floors. Guardian and Fatescribe were both fine fights. Guardian is the most Patchwork-style fight I’ve seen since the original Patchwork in Naxxramas, I’m happy to get its loot but it’s definitely going to be more fun for the healers than for me I think. Fatescribe was a lot of moving parts (literally!) but the room manipulation was a fun mechanic.

Kel’Thuzad though, I really wanted to like that one more than I did. I’m not sure what I’d change about it, maybe there’s just too much happening at once from our first night of pulling it, and with a few more nights under our belt, it’ll feel fine — but I think it could’ve done with maybe one less mechanic? Or on the flip side of that, more changes between the first three normal phase ones? They all kind of ran together and I was a little shocked when all of a sudden we were on the final burn phase and I didn’t have to worry about the fractured pieces of my soul anymore.

Finally, Sylvanas was super fun! It was really great to actually get my hands on her encounter after watching hours of Echo and Complexity-Limit pulling her for the Race to World First. I liked her three distinct phases! P1 with the dodging arrows and chains and giant knives launching across the room was cool. The second chains phase was a great way to throw some adds at you, and reward players for their ability to dodge waves that’ll yeet you off into nothingness. Then we got to the final burn on top of Oribos and it was the best kind of busy!

There was always something happening that needed attention! The tank swaps and platform-hopping to clean up the puddles from the floor were fun and engaging for me. Having to figure out wailing arrows and raid spreads with the limited room was a good test, and we even got to dodge some knives.

Nothing about it felt unfairly punishing to me, and there’s nothing that I’m really dreading going back to — unlike the Jaina frost mist phase, or the Kil’Jaeden darkness phase.

ENO’LL MAKE YOU LIVE THEIR CRAZY LIFE, BUT HE’LL TAKE AWAY YOUR PAIN

Is it almost time for a picnic in the Maw?

Maybe if the Jailer dragged a few more nice idyllic realms into the Maw, it’s still pretty full of living suits of armor just itching to get a little tormenting in on the weekend. Not really what I would call my ideal picnic company. Surely there’s got to be a nice Pacific Northwest or Appalachian-inspired afterlife that he could slap a couple of chains onto? Y’know a nice densely wooded area that’s full of tall trees, mountains, buried secrets, and long-forgotten Old Ones that whisper quietly from behind that tree you just walked past.

Have a great week everyone, I hope all of your loot is just what you wanted! Don’t forget to leave Anna lots of questions for tomorrow!