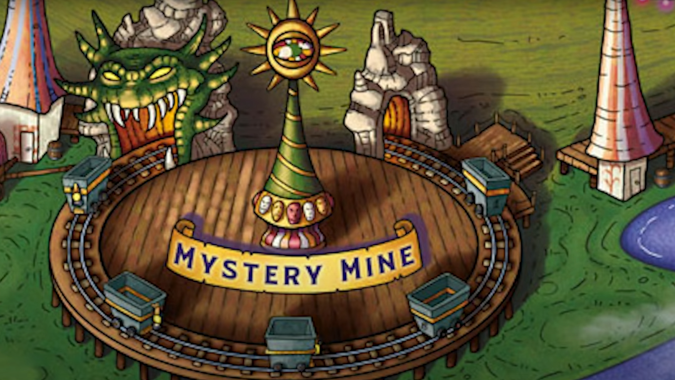 One of the things that Wizards of the Coast has been really good about is making longer adventures that can serve as campaign starters or let you hang the framework of your own campaign from as a scaffolding, and which provide enough detail to use the whole thing as a jumping off point. The Wild Beyond the Witchlight does this for the Feywild, the plane of faerie in Dungeons and Dragons. using the framework of a mysterious carnival with ties to the extraplanar realm to give players a means to enter and explore it.

The Witchlight Carnival in this book is inspired by Ray Bradbury’s Something Wicked This Way Comes, according to Chris Perkins, who has apparently wanted to write a Feywild adventure for 5th Edition D&D for years, and there’s a whole metastory about the carnival and the Feywild. Just as the Shadowfell has been worked into the older Ravenloft setting with the Domains of Dread existing in a distant corner of that plane, the new view of the Feywild has Domains of Delight ruled by an Archfey, similar to how the Domains of Dread have Dark Lords.

But for me, I have to admit it, I’m most excited by the new player backgrounds and races, some of which we saw in a recent Feywild themed Unearthed Arcana playtest. I’m super excited for playable Faeries and the Harengon, what were previously called Rabbitfolk in that UA. And I’m intrigued by the callbacks to 80’s D&D — for example, the fact that the Witchlight Carnival’s roller coaster is the one from the original D&D cartoon implying that cartoon was in fact a group of kids from Earth getting sucked into the Feywild. Also, we’ll see returning characters like Kelek the Evil Wizard, Strongheart the Paladin (who was a toy as well as appearing in the cartoon), and one of the most stubbornly recurring characters in D&D, Warduke.

Warduke is no joke, y’all. Tied to the 80’s, yes, but he keeps coming back pretty much just on that cool visual alone. And who can blame WotC for bringing him back? I’m so looking forward to these and hopefully other characters. Maybe we’ll get Venger? The Dungeon Master?

This adventure has the potential to also serve as a mini campaign exploring the Feywild and the Domains of Delight (and their Archfey masters). Players will also have the opportunity to get acquainted with evil Wizards, noble Paladins, and mercenaries out for themselves, because the adventure includes many figures of D&D past. Play as a character stranded in the Feywild for years or a member of the mysterious Witchlight Carnival and potentially figure out why Mr. Witch and Mr. Light once traded their Shadowfell exploring carnival — the one from Van Richten’s Guide to Ravenloft — for one that possibly stranded a bunch of teenagers in the Feywild in the 1980’s.

Man, if they actually do stat blocks for the cast of that cartoon I’m gonna lose it.

Blizzard Watch is made possible by people like you.
Please consider supporting our Patreon!
Filed Under: Adventure, Archfey, Domains Of Delight, Feywild, Warduke, Wild Beyond The Witchlight
Advertisement