The Hearthstone United in Stormwind meta is lightning fast, but these winning decks can accelerate your game 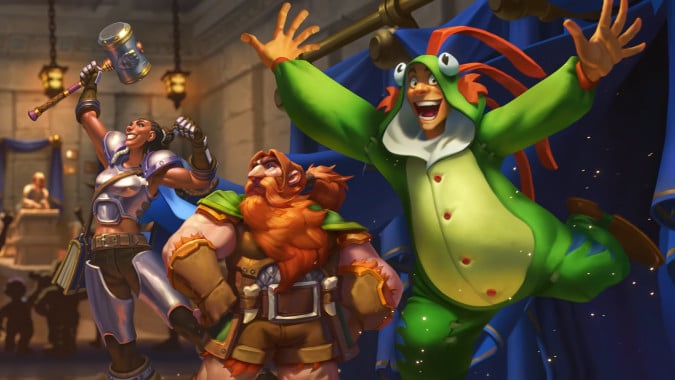 United in Stormwind, the current Hearthstone expansion, changed the game in a way we hadn’t seen in a very long time. The current meta is all about speed, to the point that Control decks are struggling to find a way to remain relevant right now. Those long, drawn-out games where one player is able to win by attrition? Yeah, those are no more. Every successful deck in the current meta has a clear plan to take down their opponent, and to do it quick.

Basically, the introduction of Questlines gave several classes the tools to win the game really fast. It’s just not possible to outlast those decks — and if you can’t beat them, you have to join them. To survive in the current meta environment, you need to either play an aggressive deck that’s capable of killing your opponent fast, or play your own Questline deck that has a built-in game plan to win.

So read on to find out about the best Hearthstone: United in Stormwind decks at the moment. 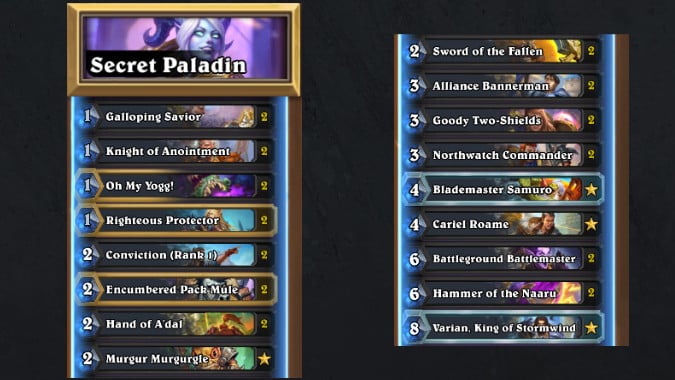 This is my deck of choice for the current meta, but it’s because I’m perhaps more familiar with how to play Paladin than any other class in Hearthstone. Your game plan is to control the board until you finally earn a turn where you can use either Conviction or Battlegrounds Battlemaster (or both!) to hit your opponent for a ton of damage.

You’ll want to be aggressive, perhaps more than how Paladin usually plays: controlling the board is important, but killing every single minion the opponent puts down will lose you precious time. Against burn decks like Questline Mage and Warlock, you simply can’t afford to do that.

You need to keep damaging them and placing down cards that are so threatening that your opponent is forced to slow themselves down in order to deal with them instead of using that time to complete their Quests.

Handbuff Paladin is also very much viable, but while some players are listing it as one of the most powerful decks right now, I personally find it a little slower than Secret — and sometimes too slow to deal with Questline decks. It’s a little “greedier,” trying to buff minions to very high values.

If you manage to buff your minions enough and place them down, well, the game is yours. They can get so powerful for so little mana, that your opponent may not have the means to survive your onslaught. But in order to buff those minions, you’re losing out on precious early game tempo. Sometimes you aren’t able to grab the board early enough, and once you do it’s too late — so keep that in mind. 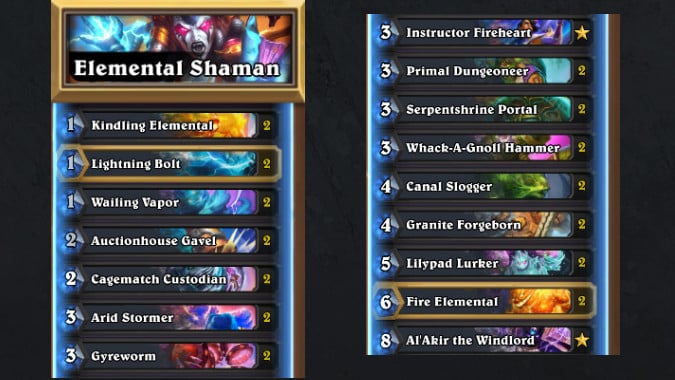 This was arguably the strongest deck in the past expansion, Forged in the Barrens, and it remains a powerhouse now. It’s the perfect midrange deck: you want to play your Elementals “on curve,” that is always playing minions that use up all your mana on every turn. The catch here is that each Elemental you play makes your Elemental on the next turn stronger somehow, so you never want to break the chain. You always want to ensure you’re playing a minion that’s stronger than what your opponent has until you can overwhelm them.

The best thing about this deck is that it seems to counter a lot of the other decks that are popular right now. It usually eats Paladin for breakfast, for instance. This is perhaps the “safest” deck to play at the moment: it’s not particularly weak against anyone else and it’s pretty budget-friendly, so if you’re struggling consider giving Elemental Shaman a try. 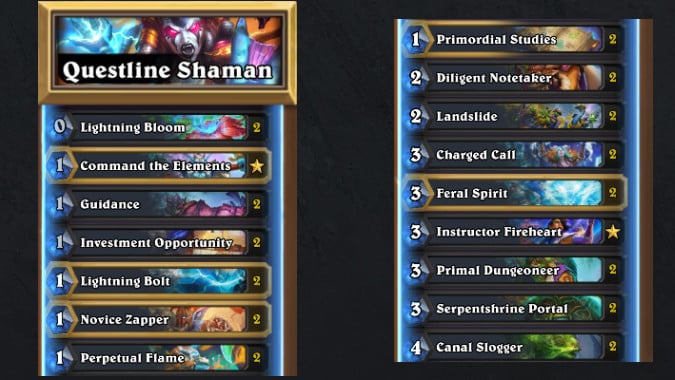 A popular variation for Shaman is this deck, which takes advantage of the Questline in order to get those double spells from Stormcaller Bru’kan and unload burn spells left and right. This deck will do all it can to survive, clearing the opponent’s board (if their opponent has a board), while playing Taunts and other threatening minions.

Since the Questline isn’t all that hard to complete, this deck can sometimes find Bru’kan pretty early on, at which point the power of its spells becomes unmatched, even by other “burn” decks like Questline mage. It’s certainly a ton of fun to play. 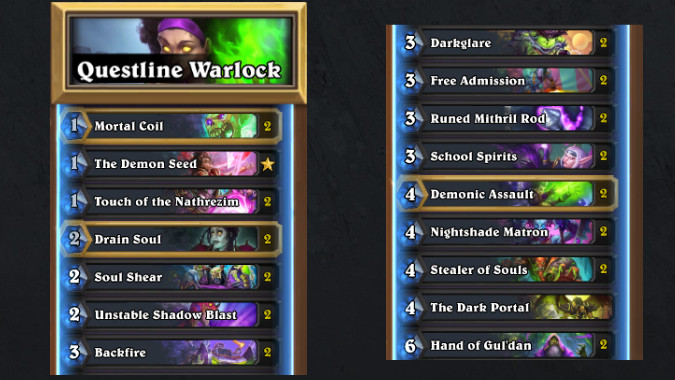 Many pro players consider this to be the strongest deck right now by a large order of magnitude. But there’s a huge caveat: it’s hard to play correctly. So we find ourselves in a situation similar to the days of Patron Warrior in the past: the game has one deck that is king among all others, as long as the player piloting it is also a king among players. Many will try to remove this particular Excalibur of a deck from the fabled rock, but fail to do so.

Whatever the case may be, this deck has some of the most powerful tools in the game to damage itself quickly (while playing cards that are stronger than average because of that “detriment”), but also to heal itself quickly. It’s common for you to think that you have your Questline Warlock opponent on the ropes at very low health, and believe that the game is won — only for them to make a crazy comeback on the next turn, healing themselves almost to full and killing your stuff. Like I said, this deck is powerful.

There are several variations of Questline Warlock, such as the more aggressive one that emulates a Zoo deck, or the “D6” version which only plays six demons. I’m listing the most common version here, but if you’re interested, you can look those up too, in order to find one that better fits your style. 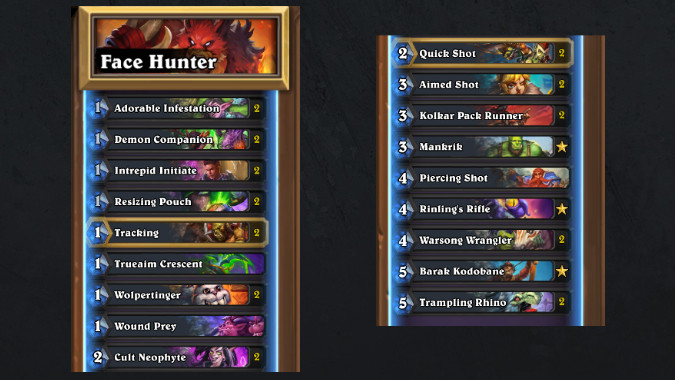 Only three things are certain in life: death, taxes, and Face Hunter among the top decks on any Hearthstone meta. Hunter is a class that is designed to keep greedy decks in check through wanton aggression, and it’ll likely never cease to do so.

Playing Face Hunter is all about dealing as much damage to your opponent’s face as quickly as possible. Ignore their board (for the most part) and ignore their game plans (to some extent): the decisions you need to be making on every turn can be boiled down to “which card will lead to my opponent taking the highest possible amount of damage this turn, or on the next 1-2 turns?” 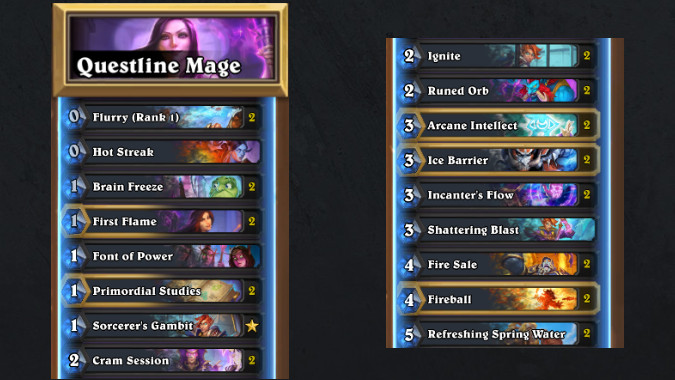 Spell Mage, or “No Minion Mage,” was one of the strongest archetypes in the game during Forged in the Barrens. While this deck isn’t quite the same, that general idea remains, and the “no minion” description fits it more than ever. This deck isn’t even concerned about generating random minions and playing them anymore; it’s all about casting burn spells until you complete your quests.

Some will call that “playing Solitaire” , but whatever you want to call it, this deck wants to finish that quest in order to reap that sweet Spell Damage bonus. Then all you have to do is chuck spells at your opponent’s face. How quick you can do that determines your success when playing Questline Mage.

This is also a relatively cheap deck, which is a reason why it’s so popular, and perhaps a good choice if your collection is somewhat limited. 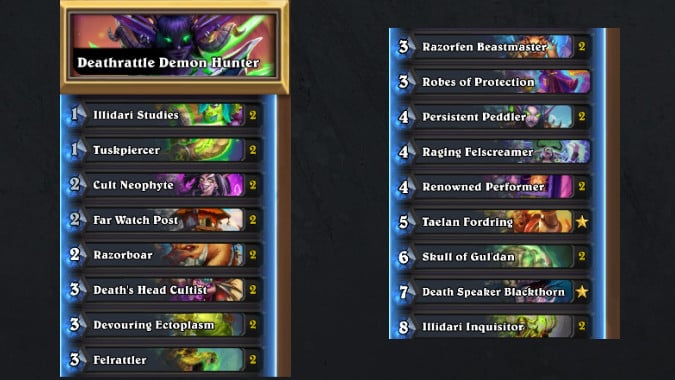 This deck is another oldie from the Barrens days that’s still playable at the top level. The fact that this deck uses the Watch Posts to slow their opponents down works to its advantage more than ever: getting to delay your opponent from completing their quests can be crucial in the current ultra-fast meta.

Besides using those Watch Posts to slow your opponent down, you’ll have lots of minions that summon other minions when they die, as well as Rush and Taunt minions galore. If you play your cards right, you’ll get the board and never let go from it.

Of course, your game plan remains the same since Barrens: put down those Illidari Inquisitors (especially if you can reduce their cost or even duplicate them in your hand), and immediately hit your opponent for eight damage by attacking them with your hero. Good ol’ Ragnaros would be proud!

There are a few other decks seeing some play at the moment, such as Questline Rogue, Questline Druid, Taunt Druid, and Shadow Priest — but I feel like those are still one step below these decks in terms of power. If you just want to find some success in the current meta, going with one of the above decks will likely be more fruitful in the short term.

Have you found your favorite deck yet? How are you enjoying this super-fast meta? May the wind be at your back, friend!