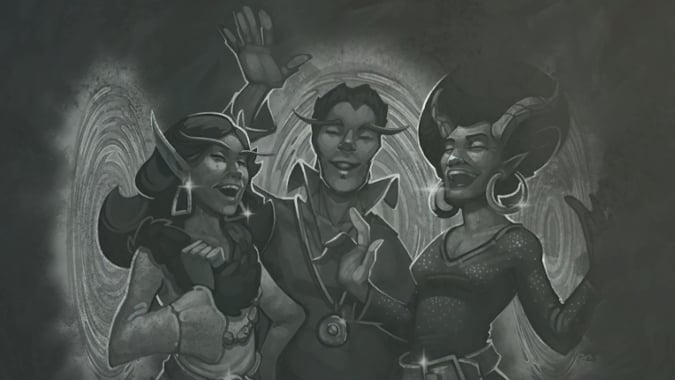 Fire up the Disco ball and let’s head back for one (more) night in Karazhan with Hearthstone’s Party Portals! Tavern Brawl. We’re going to have a a wild and random time. Who knows who’s going to crash this party? Let’s break down the basics.

There’s nothing to pick this week — just hit the Brawl button and you’re Medivh, whether you own the skin or not. Your deck is made up of various “Portal” cards, plus some custom cards for the Brawl. You also get a custom minion on the board. While each has a different name and unique art, their effects are the same: They reduce the cost of your portal cards by 1.

The Portals have a variety of random effects

Here are all the Portal cards included as part of this Brawl and what they do:

You have also have access to a custom Party Portals! This will summon one of four custom minions for this Brawl:

How to win the Party Portals! Tavern Brawl

Observant readers will no doubt notice how often the word “random” has appeared in the description of the Brawl. While there are many random elements, there’s a bit of strategy that will help you get those wins.

You need to prioritize using your minions to clear the others player’s minions. Face is the place eventually, but only after you have control of the board. There is plenty of life gain from Ironforge Portals or Romulo. Don’t hesitate to use your Moonglade Portal on a minion instead of your Hero. When you attack your opponent’s minions, try to not leave your minions with 1 health. You’re just asking for a Maelstrom Portal to clear your board, or for your opponent’s Hero Power to finish it off.

Red Riding Hood is more powerful than she looks. Once she dies, your opponent can’t take any further action. It’s one of the few ways to swing tempo back if you’re behind. If the opposing player has multiple Taunt minions, kill the others first, then kill their Red Riding Hood last.

I’m not usually a fan of Brawls with this much randomness to them, but I’ve enjoyed my games this week. Despite all the randomness to the Brawl, there are fun strategic decisions each turn as you try to make the best trades while also putting pressure on your opponent’s face.

The Brawl is a good way to knock out quests like “cast 20 Arcane/Fire/Holy/Nature spells” or “play as a Mage.” Keep queuing and eventually, you’ll should get the pack.