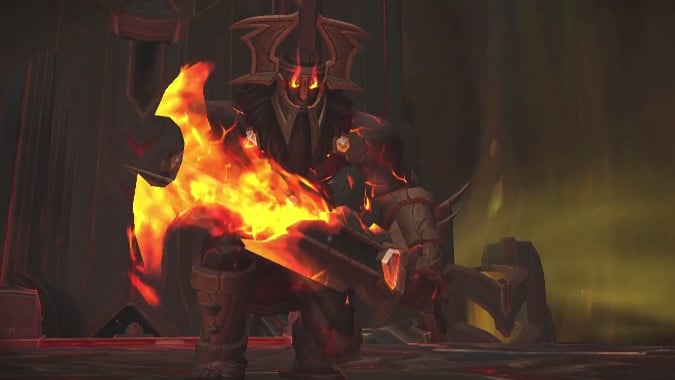 It’s no secret that I enjoy old content for the sweet transmog loot cradled within, like a Kinder Egg full of potential outfits I haven’t acquired yet, so when I see changes to Legion raids like Antorus and the Nighthold — changes aimed at making these raids easier to solo — I’m very happy. Well, not in a physically evident way — the last thing I want is for you to see me experience emotion, I’m an emotionally damaged man — but nonetheless, it’s really great news.

The change to Mythic Gul’dan removing the stun from Parasitic Shadow Demons is extremely welcome. While I’ve managed to solo that jerk before, if you get unlucky he can still basically stunlock you at the worst possible moment, so this fight has gone from a squeaker where you line up all of your DPS cooldowns to try and destroy him before he can cast it into a much easier, less frantic affair.

The changes to Antorus are similar in their motivation — Aggramar, for example, will now have a much reduced knockback which will make soloing the jerk a lot easier — it’s possible, but you have to get lucky, and it’s very easy to end up going over the edge if you’re in a bad place when it goes out. The change to Immonar the Soul Hunter is nice for any pet classes, since currently he only uses his Sleep Canister on groups… or on Hunters, Warlocks, Death Knights, and anyone else with a pet out attacking the boss. With this change, players who use a pet in combat will be able to solo him without getting forced to take a nap.

And the Council of Shivarra fight in particular will be a lot easier, since that incredibly annoying 99% damage reduction shield that pops up when two of them are close together won’t trigger when you’re in there solo, meaning you don’t need to keep them separated like the Offspring were chanting in your ear the whole time.

These are all great changes and I approve of them all unabashedly. But I would like to see more — Wowhead pointed out that Argus, the Hounds of Sargeras and the Essence of Eonar fights are basically unchanged, and that Essence of Eonar fight is brutal if you’re not on a class with a lot of movement speed increase abilities or other ways to pop around the map. Would definitely like to see that get changed. I’d also like it if the trash on the way to Kil’Jaeden in the Tomb of Sargeras could maybe get a nerf to that DoT that kill you dead without healing, since some classes can’t really do that and will die on it.

Hopefully we’ll see more changes like this, perhaps also in Battle for Azeroth raid content since that’s also being added to Legacy Loot in patch 9.1.5. There are definitely some fights — like practically everything in Ny’alotha, for example — that could use some tweaks for solo players looking to farm appearances. But for now I’m happy with what we’ve got, as I can farm Taeshalach more easily.