Over 100 fossilized dinosaur eggs have been found in Argentina, and it could change our understanding of how dinosaurs lived 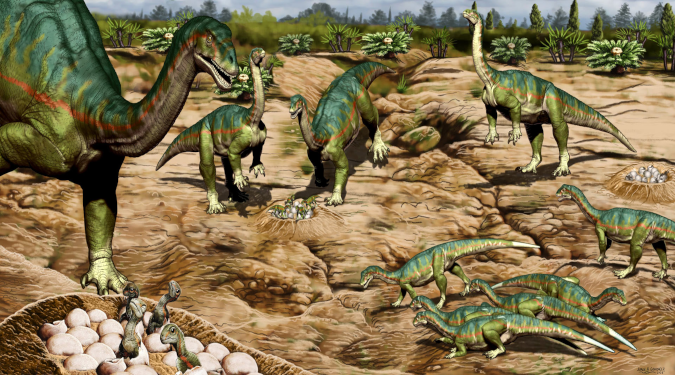 If you aren’t big into paleontology, you may not understand why new evidence that Mussaurus patagonicus — an early Jurassic Sauropodomorph related to later Sauropods like Diplodocus — was a herd animal that lived in large social groups that broke themselves up by age is such a big deal. Mussaurus was a relatively early animal, living some 193 million years ago, and the discovery of fossilized Mussaurus skeletons and eggs in Argentina indicates that they were showing herding behavior 40 million years earlier than other dinosaurs. It’s amazing to find evidence of herd behavior in a basal animal that might well be ancestral to the titanic animals like Sauroposeidon or Argentinosaurus. It might well revise our understanding of how dinosaurs lived.

Note: Mussaurus means “mouse lizard” because we used to think they were tiny, based on other juvenile fossils we’d found. But they were in fact over 1000kg/2200lbs, so yeah, not so mouse-sized.

But the real show comes from the eggs discovered at the Argentina site, where researchers found more than 100 fossilized Mussaurus eggs with their embryos preserved inside. This is a paleontological treasure trove that will take years and years to really process, and it holds the potential to completely transform our knowledge of Mussaurus, the entire Sauropodomorpha, and how they went from animals like Plateosaurus and Mussaurus to those aforementioned behemoths.

Argentina has been an amazingly rich source of older Triassic and Jurassic fossils over the years — dinosaurs like Herrerasaurus have changed our conception of the origins of the Sauropodomorpha and their Theropod relatives, blurring the lines between them. Seriously, look up Jose Bonaparte sometime — it’s wild how many fossils he is directly or indirectly responsible for discovering. Sadly, he passed away last year, so he’s not involved in this find, but I like to think he’s smiling down on us from the gigantic prehistoric mammal he’s riding on in heaven. Oh, and he preferred studying mammals, so it’s even crazier how important he was to dinosaur paleontology.

The find — which includes the fossilized remains of 80 dinosaurs in addition to the eggs — seems to be the result of a drought or flooding incident that killed the animals and put their remains and the eggs in a good position to be fossilized, giving us the chance to study them. Not great for them, but really great for us. These dinosaurs were herding up, raising their kids, and potentially even mating in large groups 193 million years ago. This is so exciting and it could lead to us learning so much we don’t know about the Sauropodomorpha, I’m vibrating here.