The Queue: A Covenant-swapping extravaganza 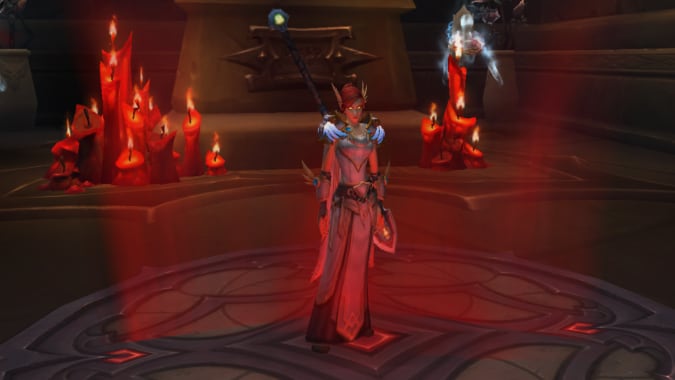 I think I’ve integrated nicely. No one suspects there’s a Kyrian in their midst.

How is it to finally join the Venthyr?

When I logged on for the first time in 9.1.5, the first thing I did was portal to Orgrimmar to Dazar’alor and then fly to Uldir to see if I could solo it now that Legacy Loot is enabled. (Answer: sort of. It took a long time to take down Taloc on normal, and Mother killed me three times while I tried to remember the mechanics.)

But after I got tired of that, I went to Oribos and swapped my Covenant to Venthyr. And then switched back to Kyrian to reclaim some Anima. And then back to Venthyr.

And I’ve gotta say, Venthyr life is pretty good. Back at the beginning of the expansion I was distinctly unimpressed with the Covenant plate transmog, which was bulky and spikey. But the Renown 60 set and the Korthia set are amazing and I am upset no one told me how great they were in advance. So now I’m committed to collecting all the transmog.

But for my Wednesday raid, I swapped back. We’re working on Heroic Sylvanas and though I know all the world first Holydins were Venthyr, but I’m still more comfortable playing Kyrian. It feels better for ongoing throughput while Venthyr feels like it would be better burst, and I don’t know the fight well enough to toss down Venthyr’s Ashen Hallow — a four minute cooldown — effectively. Kyrian is more straightforward.

But now I’m Venthyr again! How great is that? I really like having that choice, when needed. It’s quite possible that before we get Ahead of the Curve I’ll swap over for raiding if having that burst makes sense for us. That’s pretty great.

Anything feeling particularly good about 9.1.5 so far? I was really happy to finally hit T6 with the Archivists, and got my 60s all the bonus books. That felt very alt friendly.

As you may have guessed from the above, it’s all about Covenants for me. I’m thrilled that I can swap around at will. I’m working through a new Covenant quest — my Druid was a Venthyr to get through the story, but Venthyr is maybe not the best option for a low-skill Moonkin like myself, and I hadn’t gotten very far. Now I can make my Druid a Night Fae and do the Venthyr campaign on my Paladin.

It’s good. It’s really good being able to access all the story and swap my abilities at will based on what I need and what I want. Soloing? I can go Venthyr and work on the story, and have a very powerful DPS burst cooldown. Healing? I can go with old reliable Kyrian. Want a nice tea party? Today I’m a Venthyr! Want to bash my head against the wall in annoying combat encounters for transmog? Today I’m Kyrian!

Do you find it off putting that we now port into Oribos one “zone” over? I used to run in and click down and then run right to Korthia now I’m 2 off with the new port in. It’s kinda annoying but why do you think they programmed it that way?

I’m afraid I love it. I port to Oribos from my Covenant hall, turn a 180, and dive right into the Maw. EZ.

The flavour activities for the various covenants were very different (Venthyr parties, Night Fae gotta get them all sparkly forms, Necrolord build-a-buddy, Kyrian bash-your-head-against-unwinnable-combats) – how do you feel having such different content locked behind a membership wall has been. It’s largely cosmetic, and Ion et al said they wanted choices to be meaningful. But would allowing us access to other covenant’s special paths once we’re into paragon levels have been a good way to fill in the content drought? I don’t want to have to covenant swap to be able to try them out, but I might have to.

The hard wall between Covenants really stopped making sense after we managed to bring everyone together in the fight against the Jailer. It would have been a great time to drop those barriers and give other “trusted” people access to some of their special treats. Perhaps not in quite the same way — wouldn’t it be interesting to come to the Ember Court as a guest? — but some access, in some way.

I’ve honestly been frustrated beyond reason with the Covenant specials. Some (Venthyr) seem great, lots of fun. Some (Kyrian) seem like endless, difficult grinds. And Venthyr get to make friends with everyone! And get sweet letters! Why can’t Sika be my best friend?! That’s how I’ve felt about it up to now.

But now I can multitask! It’s great. Have I said it’s great yet? It’s great.

Q4tq: As I’ve started watching BoJack Horseman again for the nth time because apparently I hate myself and want to hurt my own feelings — what’s something you’ve rewatched a bunch of times and why?

No show has wielded the F word better than Bojack. Yes that includes the Good Place and “Holy forkin shirtballs”

Usually if I watch something over and over again it’s because it’s a comfort of some kind, soothing and familiar. Lilo & Stitch probably tops that list — it has a unique animation style that’s soft around the edges, and it’s a very gentle, very human story for all it’s about hunting down destructive aliens. I’ll put something like that on if I’m stressed out or it’s too quiet in the house or I just need something light on in the background. Sometimes to sleep to. I’ve watched it hundreds of times, though I’m more partial to music for background noise these days, sometimes podcasts or audiobooks to fall asleep to or there’s a great YouTube channel that does eight hour loops of Star Trek ship sounds which is unbelievably comforting.

I’ll just leave this one here.

What do you play when you want to play something but nothing you have to play sounds good? >_< Asking for me because I’ve had a real hard time finding anything I want to play lately.

If I just want a diversion, I usually go for mobile games. There are lots of mobile games that are diverting but don’t require a ton of mental energy, and sometimes I can (accidentally) play them for hours without realizing it. I’ll do Hearthstone Battlegrounds or Mercenaries like that sometimes, only half paying attention. There’s also a version of Oregon Trail on Apple Arcade that’s fantastic. Low effort, pleasant music. I like puzzle games, too — I still play Threes sometimes, and I wish there were a match 3 game out there that wasn’t just a mini-game inside another game or full of aggressive microtransactions that kept you from playing it for hours. Again, engaging but not requiring my whole brian.

If I want to really devote myself to playing a game, I’ll play Mass Effect 2 or 3. Playing takes up a fair amount of attention, and sometimes that’s good if I’ve had a bad day and need to focus on something or get out of my own head. But I’ve also replayed it enough that it’s completely familiar, it’s like rereading your favorite book. I have a save file I keep in Mass Effect 3 right at the Citadel DLC — perfect.

When I don’t know what to play, something that’s not too much work and/or something familiar is usually the way to go. And knowing that, if I’m ever in the mood to play and don’t know what, I can just grab my favorite game and get started without thinking, which helps in indecisive times.

But now I’m curious… what about everybody else? Y’all looking forward to the annual (American) eating celebration? What’s on the menu?

And that’s all for now, my friends. Take care of yourselves and take some time out of your day to pet the nearest dog — it’s good for you and for them. Win/win!