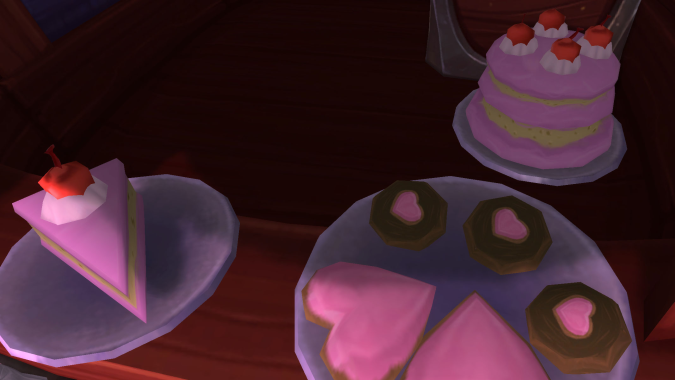 Today is our very own Matt Rossi’s birthday, so make sure to leave them the gift of some softball questions for tomorrow’s queue. Preferably some about dinosaurs. You know how they like those.

This is The Queue, where you ask us questions and we’ll answer while eating a slice of cake.

I’m at the age where everything automatically hurts!

Happy birthday to you, too! As a fellow Old, that doesn’t really narrow it down, though.

Q4tQ: what was the first thing that killed your character in WoW?

I’m pretty sure it was the Defias stealing Milly Osgood’s grapes.

Back in the day there was a spawning tech where, if people started killing stuff, spawns would become more and more rapid until you were basically getting griefed. This is still in effect to a certain extent, but it was a little bit less “smart” back then. It didn’t matter as much for the starting area Kobolds, because those tended to be yellow mobs, but as soon as you hit those first aggressive red Defias, they would murder you and your entire party’s face off without blinking an eye. It was especially brutal when you were a newly ressed caster whose friends had already moved on to the next step because quest items weren’t shared loot.

It wasn’t as bad as those damn Pillagers in Moonbrook — they were all melee, so they didn’t two-shot you — but it was still pretty memorable.

Q4tQ: Commercial for WoW with Mr.T, Chuck Norris, William Shatner, and others got me interested in paying WoW. I thought the commercials were fun and they made me imagine playing the types of characters they talked about.

I can’t remember the last celebrity that was in a WoW commercial. I wish Blizzard would make new WoW commercials with celebrities in them again. Which celebrity would you like to see promote the next WoW expansion? I’m going with Lucy Lawless and/or Bruce Campbell. Did I just date myself? Maybe someone else could suggest someone that’s more modern and a newer generation of WoW players could associate with?

As the commenters noted, there was a push from some niche “nerd” celebrities like Danny Pudi, Issac Wright, and Christopher Mintz-Plasse in an Instagram-based promo push just before Shadowlands.

Though the older teen age demo might’ve been into Game of Thrones, I’d guess that those celebs aren’t as relevant to them as they are to someone in a more millennial age bracket. What’s more likely to get them to play is having their favorite YouTubers involved — which is something that was also in play for that Sound the Horn promo, when they got Tim The Tatman involved. Tapping someone like Dream or It’s Funneh to play WoW would make a lot more sense from a marketing perspective. However, older teens generally don’t watch TV anymore, so a commercial like the Night Elf Mohawk wouldn’t be likely to sway them anyway, since they wouldn’t see it. Maybe an unskippable 15 second YouTube ad?

Unfortunately. I enjoyed those spots, too.