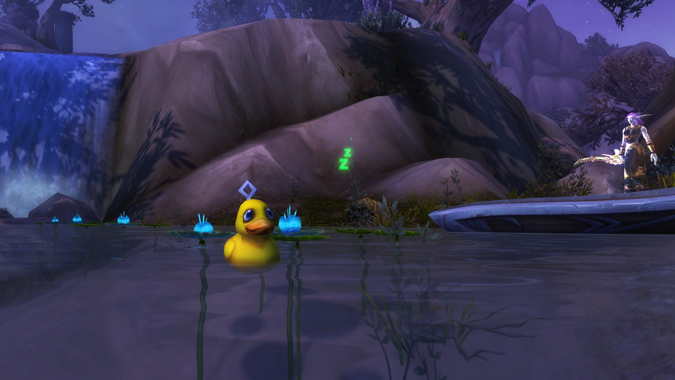 I really don’t feel like I need to justify this further.

This is The Queue, where you ask us questions and we answer, as long as you’re asking about ducks.

Q4tQ: For every game in your backlog, a duck is summoned and lunges at you to attack. How fare you?

Between Epic Game Store and Twitch Prime freebies alone, I would die before they all had a chance to render. That doesn’t count the games I’ve purchased or been furnished codes for on Steam and not played yet.

Yogg help us all if this would also include our Steam wishlists, which I basically use as a landing page for games I might conceivably want to play at some point and purchase only if they’re on an incredibly steep discount. These seem to be hydra-like, where when I actually get around to purchasing a game, seven other take its place.

Oh, by the way, Cozy Grove DLC landed just before this Queue! And yes, it has ducks!

I’m not exactly an encyclopedic lore source like some of the other people we have on staff, but I’ve always been kind of irked at the idea that we went to the afterlife and there weren’t more NPCs we recognized, let alone more heartwrenching narrative beats from the major players. I recognize that the stated narrative design went contrary to this, that they didn’t want to laboriously revisit every single dead character, etc., and I completely understand why. We already just visited a bit with Jaina’s dad, whom she betrayed, in BfA, for instance, and she had a whole redemption arc not just about her being forgiven by her people but her forgiving herself. I don’t know that I would’ve wanted that arc and character growth altered by having her actually meet up with her betrayed father in the afterlife, whether he would have rejected or accepted her, but it seems like he would’ve had words to say, and that is just the absolute tip of the iceberg.

But if that wasn’t something they intended to do with the narrative, they could have just made the Jailer… just… someone from someplace else, not of the afterlife. Legion part 5, Voidlord part 3, invented some new evil faction, whatever have you. They could’ve said that souls in general are powerful magic or energy sources or whatever to be tapped into — we’ve already seen this in action — and that Sylvanas is in league with someone who promised that they could totally remake reality with a last-instant warning about some other super dangerous thing. Many of the narrative beats could’ve remained relatively the same — Uther could’ve had his soul stolen by Frostmourne, because it still would’ve been the random macguffin AU!Jailer created — but without this nagging feeling that we’re missing an additional bit of closure from every NPC that’s ever died either in front of us or at our hands, especially since the real pillar of the afterlife as we knew it, Arthas, was revived simply to show that Sylvanas wants to forget him, which she could’ve done by just, you know, not interacting with him at all.

All I’m saying is, if they didn’t want to let me follow around Stalvan Mistmantle ringing a huge bell to remind him that he’s a total, utter creepazoid, they could’ve changed the setting, and not even in drastic ways.

A couple of questions for the queue.
First, do you think dragon flying will have any effect on druids? I prefer flight form over a mount naturally. Why wait for a cast bar?

Second, do you think Blizzard should have a form of leveling like the game was before Chromie Time? Some people like my wife loved the long leveling process. I don’t want max level with three figures, but for leveling to take about the time it did in Wraith/Cataclysm.

While we don’t know for sure yet, I’d bet that yes, in order to fly in Dragonflight, Druids are probably going to have to learn Dragonriding with the rest of us. And yes, that probably means they won’t be able to instantly mount up and herbalize while they’re in their flight form. And yes, I completely understand why that’s both a compelling choice for a Druid to make, but in real terms, it won’t affect the core class gameplay unless all you do is fly around picking herbs. And now that I think about it, I wonder if that’s intentional, to make it just a little tiny bit tougher and more laborious to multibox. Hmm.

I don’t think we need to turn back the clock on Chromie Time. I will say that I miss being able to keep that one big bad quest in my log, move on to the next zone for a few levels, and then come back and completely destroy the elites after I outlevel them. That is one thing which is appealing about the Classic set, to me, though the balance weighs much more heavily in favor of retail in the end.

Q4tQ Presuming an expansion of the player options happens in the future, which classes do you see Dracthyr being able to be? Which races do you see learning Evoker?

I don’t see Evoker being available to other races, unless they make a new race in the future, just due to how a lot of the gameplay is tied to their dragon-ness. By contrast, I feel like every race should be allowed to be a Warrior. Warriors, across the board, are just people who picked up a sword, or an axe, and decided to learn to use it. Not everyone can call to the light or the elements. Not everyone can see ley magic and use it. Not everyone has the strength of will to control the fel or the void. But if you can hold a sword, you can fight.

A lot of Dracthyr fighting and Evokers seems to be tied into breath magic, and while you can teach anyone to hold a sword, it seems like a tall order to teach just anyone how to belch fire. Ironically, this means the most likely race beyond Dracthyr to be Evokers is probably Dwarves.

Has the news that Diablo Immortal will release on PC changed whether or not you are interested in playing it?

It still doesn’t interest me a whole lot, but I might take a poke at it while I’m waiting for Dragonflight and Diablo 4.

It makes me even more excited, since they’re including cross-play and cross-progression. Since having my kids I’ve turned pretty extensively to mobile gaming. From late night wakeups to soccer practice, having a game on my phone that I can just turn on for a few minutes to pass the time has been really nice, and I’ve been very impatient for Diablo Immortal. Especially since this is landing right as summer vacation starts, I’m really looking forward to bringing my kids to swim lessons and coding camp for once, let alone long car rides or camping trips, and having something to do with myself other than scroll Twitter. Hearthstone is nice, but the match structure means that I need to set aside serious swaths of uninterrupted time I’ll lose rank, or even in the case of Mercenaries, it feels pointless to get halfway through a map and have to turn it off and lose pretty much all my rewards because practice is over.

But that said, I’m more at home gaming on my computer, so I’m glad to be able to also play there. And even better is the ability to change control scheme. I usually try to get my seasonal journey done in D3, but clicking so much makes my forearms ache more than pilates so I don’t usually play much more than that. WASD in Diablo is a total game changer for me. Diablo Immortal may wind up being my most played Blizzard game for a long time after it launches.