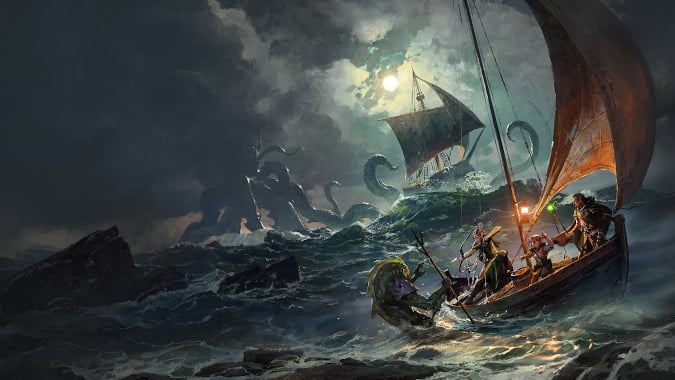 This character profile has been written for Drusk, one of our supporters. If you enjoy it, you can check out the other profiles we’ve written, too!

The deck of the Carrion Carrick was on fire. Blades flashing, voices crying out various things — curses, the mangled language of spellcraft, the sounds of bodies hitting the wood, cries of pain, all that kind of thing.

Drusk felt the new wound on his forehead like a hot brand. He knew that’s what it felt like because he’d been branded, back when his desires had ended up with him in the hold of a ship very much like this one, back when he’d first encountered the bloated slave trade of the money parasites of Essek. The memory cut through his distraction, sharpened him like the stone he dragged across his axe blade every time he saw one of these black barges on the horizon.

“Kill you!” The Ogre in the captain’s coat sprayed spittle along with its words. “My ship! Mine! Rip you in half!”

“I have to say,” Drusk rolled out of the way of a massive overhand smash, then used the creatures own thigh as a platform and leapt up into the air above it. Considering how tall it was, he was distantly proud of the leap, but didn’t let himself get distracted. Instead, he grunted syllables of power while drawing the axe up over his head and came down, the shimmer of thunder caged by the spell thrumming up and down his arms and into the axe. “Worst last words ever.”

The peal of the strike rang out over the deck, shook the rigging. The few remaining Essekian sailors not already bleeding out on the deck or trying to put out the fire felt it in their teeth. Turning to the quarterdeck, they all saw the aftermath — the nine foot tall lump of muscle and spite, the captain of the ship, Goron the Three-Eyed himself stood for a moment as if he couldn’t quite understand what had just happened to him.

Standing literally on his shoulders, Drusk ripped the axe out of the creature’s head and shook it, and rode the behemoth down as he collapsed. He stood on the beast’s chest, held his axe above his head, knowing he had their attention.

“Two choices! The first – toss down those weapons, hand over the keys, and we’ll let you live. Second? You can carry this dead idiot to the gates of death and tell the dead ones how you stupidly became slavers, wantonly stole the lives of others, and died for it. Pick one, I’m bored now.” 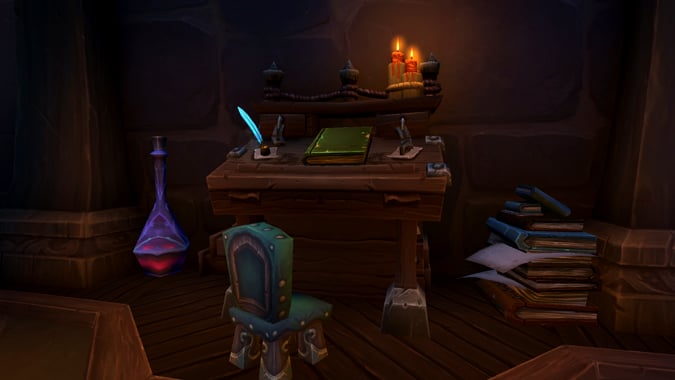 Drusk looked up from the ledger he’d found in Goron’s quarters. The Carrion Carrick was a good ship. Sure the flame damage had been a bit troublesome, but in the end, even with that it was a worthwhile prize, and the various freed slaves were already taking up roles in a makeshift crew.

“Don’t Sarsha me. That was grandstanding.”

“It worked, didn’t it? Got them to lay down their swords and now we’ve got 22 slavers in the cages they used to keep their victims.” He sighed, touched his head where Goron had torn his scalp off. Sarsha had healed it, but it still stung. “Now all we have to do is figure out where on the Summer Sea we can take them.”

“I’d… rather not go there.” He fought back another sigh, took a sip of Goron’s really rather excellent Shidhu. He had no idea where it had been made, but the sweet bite and burnt caramel aftertaste made him think it was from Vinolo or one of the smaller towns surrounding it. Memories tried to swamp him — his younger self, arrogant, brash to the point of conceit, and so damn sure of himself even as he blundered his first command right into the teeth of storm and got his crew half swamped. Memories of an uprising, flashing blades, the death of Tantolo.

The old man had warned me and I didn’t listen and then, when he tried to save the crew from my idiocy, I killed him for it. Not his finest hour, nor one he wanted to remember or relive. His uncle would surely bring it up if he took them to Coltica.

“I’m looking at this ledger.” Drusk showed it to Sarsha. “Look here. Picked up a lot of cargo in Mikelema.”

“That’s on the edge of the Icewall.”

“On the edge, but still in the light.” Drusk took another sip. “This is really excellent stuff. Want a pull?”

She nodded and he handed it over. Took a sip, grimaced slightly at the surprising bite.

“What is that? Tastes like Rumbuillion, but kicks way harder.”

“Think it’s Shidhu. Think Rumbuillion but with 80% cask strength.” He laughed at the look on her face, the way her human forehead creased when she scowled. It made her look more orcish, and Drusk liked it, even though she wasn’t and he was. “My people like it harder.”

“I’m not touching that.”

“Yes, and don’t think I’m not disappointed.” He smirked at her, took the flask back but didn’t sip. A clear head was what he needed. “Looking at the charts, if we stop at Vinolo for supplies…”

“In a stolen Essek slave ship?”

“Perfect cover. Remember when the bastards sold us to slavers? Not much chance Vinolo’s wharfmaster will look too closely at this ship, and we have Goron’s gold hoard to bribe the emaciated bullete’s ass. We let whoever wants to leave off there, resupply, and take the bulk of our new crew back to where they were stolen from. It’s win/win.”

“Do you even know why they were enslaved? Or how? What kind of welcome we’ll get?”

“No, but that’s part of the fun, isn’t it?” He favored her with his grind, waited until he saw her soften in begrudging acceptance. “Besides, we’ve never been to Mikelma. Perfect trip to do some mapping, eh?”

“You and your maps.”

“Portolans are needed, I like the work, and if we run into any more Essekian bastards on the way, well…” He gestured around Goron’s cabin. “We have this new ship to introduce them to. I say let’s roll the dice.”