The Queue: Hogging the spotlight 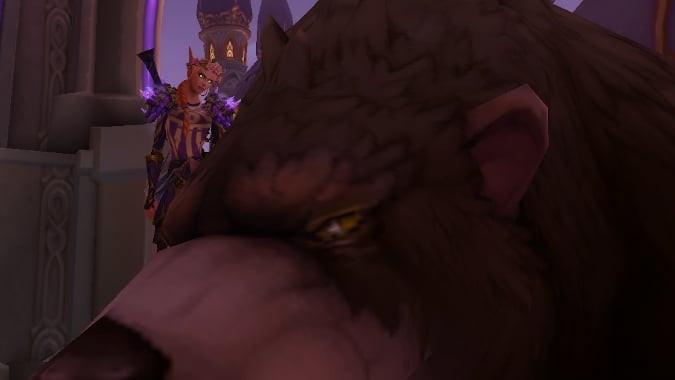 Some bears just don’t know when they need to stand in the back.

This is The Queue, where you ask us questions and apparently a bear is volunteering to answer them. No? Okay, let’s Queue this.

I know I asked this one before or close to it.

Would you rather fight 1 dragon-sized duck or 100 duck-sized dragons?

Depends on the dragons. If it’s a standard, St. George And The-style firespitting dragon, I’d easily take on 100 of those. If we’re talking WoW dragons, that gets a bit trickier depending on which ones. I would definitely take out Greens and Reds no problem. Blues, I might have some issues with, since I’m not really sure how I’d counter magic, but I’d just take them out one by one. The tricky ones are the Bronzes. With so many, it seems like, regardless of their size, they’d probably essentially stunlock me forever. Even if the cooldown was long, with 100 of them it would be a very long time before I could do anything against them.

Not that I’d ever be self-centered enough to think Blizzard planned an entire patch release around me and the intricacies of my schedule, but I have a really good… or maybe bad… feeling that it’ll be May 24th.

There’s a great big long tl;dr, but earlier this year, the state decided they would determine when elections would be held in my county, and despite the whole ‘first Monday after the first Tuesday in November’ thing, they set the date for May 24, because they said they could. The past few elections in this area have been a crap shoot, time-wise — either I’m in and out and back home in under 15 minutes, or I’m standing in line for literally hours. I plan on going early, but if it’s on the 24th, I can’t be counted on to be there as the patch drops, even for the ‘are the servers up yet?’ posts which y’all seem to enjoy.

Completely coincidentally, I’m sure, May 25 is the last day of school, so I really wanted to take the 24th for a last hurrah, spend all day in the hammock or go get nachos or watch violent movies or something, so having the patch drop that day would be my guess even without the election. The change from “I kinda want to relax” to “I have to be in a specific location for something very important for an indeterminate amount of time and it would be really tough to bring my laptop,” is what clinches it. May 24 would also be in line with the typical patch cycle, but it’s the Blizzard Watch Writer Curse that has me thinking that date is a lock.

You know what random stupid thing I want in WoW?

I want stealthing devilsaurs. Not just “low draw distance” ones, but actively stealthed.

And they’re wearing Titan-themed armor and have missile launchers, like someone found a Titan facility and did the logical thing and trained nigh-unstoppable dinosaurs to use high-tech weaponry, in a BLATANT ripoff of Dino-Riders.

Q4THSBGQ: Are you ready to say goodbye to buddies? Do you welcome our new naga overlords?

I really liked the idea of buddies, but I’m glad they’re yanking them to rebalance. I definitely welcome the naga, but I’m nervous about poison staying in. Have I mentioned how much I hate the poison mechanic lately? Yes? Let me say it again: I hate that mechanic. It feels so bad to play a touchy, APM-heavy family type and then get rocked because lol poison.

I realize that just because your strategy is complex or difficult to execute doesn’t mean you necessarily deserve to win more than someone using a more set-and-forget strategy, but if you’re on the losing side of that equation it can be really demoralizing. I suppose no more demoralizing than watching an opponent build up a few really powerful minions with no real way of countering it other than an I-win button like poison, but I still hate poison.