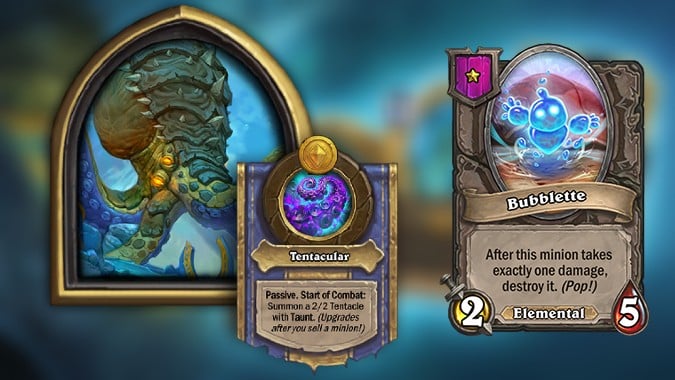 Hearthstone is about to get a good amount of new content with the release of the Throne of the Tides mini-set, but Battlegrounds is also getting its share of goodies. When patch 23.4 releases on June 1, Battlegrounds will welcome one of its titular monsters, Ozumat, as a brand-new hero. In addition to that, a new tier 1 minion is being added to help the struggling Elemental compositions, and… well, there’s one more thing. Brace yourselves, mortals, for Diablo returns.

What’s the opposite of “fan-favorite?” “Most hated,” perhaps? “Infamous villain?” Whatever it is, the Battlegrounds version of Diablo, the Lord of Terror, certainly fits that description. Suffice to say, the last time he was introduced to Battlegrounds as a limited-time event, reactions among the community were not good. He completely altered how games were played, often feeling more disruptive than fun. Much rejoicing was had when he finally left.

Why, then, would the Hearthstone team bring him back? Well, the most logical explanation seems to be: to celebrate the release of Diablo Immortal on June 2. But surely a “celebration” is supposed to be a positive event that brings joy, not terror. We don’t know if that’s going to be the case this time, but the Hearthstone team has adjusted several of Diablo’s spells, hopefully leading to a more balanced and fun experience this time around.

As for the more positive (and permanent) additions to the game mode, Ozumat follows the usual release cadence for new Battlegrounds heroes, being available to players with Perks for two weeks, and then officially released into the seas for all players on June 15. His Hero Power is simple enough: he summons a Tentacle with Taunt at the start of each combat. This Tentacle is a 2/2 at first, but it upgrades every time you sell a minion. Ozumat will likely lend itself well to compositions that buy and sell a lot of minions throughout the game, such as Pirates and Elementals.

Speaking of Elementals, they’re currently struggling, and as such were in need of a slight buff. That buff comes in the form of Bubblette, a new Tier 1 Elemental minion with a whopping 2/5 stats, but a downside: if it ever takes exactly one damage, it’s destroyed. Bubblette should definitely give Elementals an edge at the early game, assuming their opponent doesn’t purposefully counter it by playing lots of minions with 1 Attack.

All in all, it’s not much but it’s nice to see some constant additions to the game mode, even outside of the Seasons that are being introduced with this Year of the Hydra. Hopefully Diablo won’t be as disruptive or dreaded this time around, and balance changes will continue to happen.

Blizzard Watch is made possible by people like you.
Please consider supporting our Patreon!
Filed Under: Diablo, Hearthstone Battlegrounds, Ozumat, Throne Of The Tides, Year Of The Hydra
Advertisement