The Queue: Where’s the Curve? 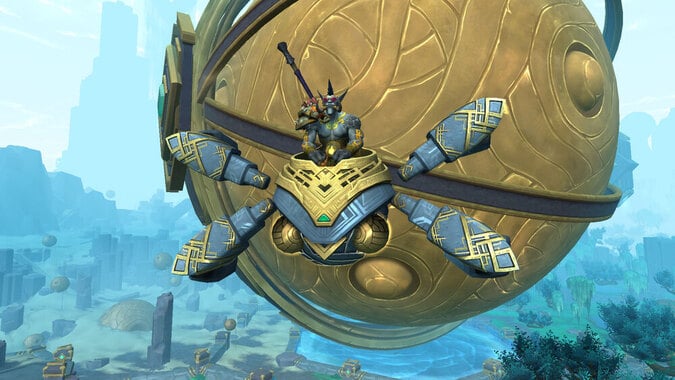 I could finally line up with my raid team to get Ahead of the Curve for the Jailer. It turns out that having a job that isn’t the usual 9-5 can make it hard to make a raid sometimes! How rude!!

It also turns out that when you can get your whole raid through the first phase without anyone falling into a hole, or getting mind-controlled by the Jailer — it gets a lot easier to do the next two phases, who knew! Armed with this new knowledge I’m sure that we’ll be a Race to World First contender in no time.

While I start practicing my victory speech, it’s time for — The Queue.

Another day, another Unclaimed BMAH Container … and I got one of the Ordos items that sell for 4500 and is the wrong armor type so I can’t even unlock the appearance. Womp womp

That’s the problem with the “it could be anything, it could even be a boat!” nature of those containers. As much as I love the lottery aspect of them, I just am so frightened of the unusable mog, or green quality pet.

I wish you luck in your next box though, maybe it’ll be a long boi!

ALL RED’S WITH BEGINNINGS

Pandaria was the dumbest expansion when it comes to professions

“oh, I’m gonna ask this trainer here at my home city in the shrine where I can find an Alchemy trainer”

The NPC: “Alchemy trainer? Ah yes, I know a very good one all the way in Dread Wastes, I’ll mark their location on your map”

Oh sure, it’s not so great from an actual gameplay standpoint.

That does feel pretty true to life. The one person in the world who can teach you about how to make that extra fancy flask lives on top of a mountain in the middle of a deadly forest full of tigers. Good luck, because they only take one student a year. Well not true to life exactly, but it does tell a good story.

I once had a family friend who used to live in a Heritage House, which is one of those really old houses that had someone famous who lived in it once. The house was great, however, if you ever wanted to do any sort of work on the house you had to use period-appropriate materials and methods. He spent eight months waiting for someone to replace something in one of his rooms that got damaged because there was only one outfit in the whole city who could still do the old school method.

It was a 78-year-old Italian gentleman and his son, and they didn’t work unless the older gentleman felt like it.

WHAT KEEPS THE MOVEWOW SPINNING

Happy Father’s day to you!

Also happy Father’s day to anyone else who feels like it’s a day worth celebrating.

I took my Dad out for Vietnamese and got him a bottle of spicy honey mead from a local artisanal mead guy. It’s a variation on a secret 400-year-old family recipe, so much like a crafter who is in the middle of nowhere in Pandaria, you’d have to go out of your way to learn how to make it yourself.

THE FORCE FROM THE BEGINNING, HM, MUSEDMOOSE

Q4tQ: what did you do today?

Asking because I got a new tattoo. 😛

Congrats! I hope it was relatively painless and turned out awesome.

I struck the equipment on two outdoor stages at a nearby Jazz festival that I set up earlier in the week. Luckily it was much faster to take everything down since we didn’t have to wait for the stages to be assembled, or for the portable generators to arrive. It still wound up taking most of my day though.

I didn’t even get sunburned (this time)!

Q4tQ when you pour yourself a second bowl of cereal, do you instinctively sniff the milk again even though you just sniffed it 5 minutes ago?

I haven’t eaten cereal since I was in elementary school.

I’m not a big breakfast kinda guy. I like eggs and waffles and all that jazz, but typically not in the morning when I’m getting up and going. If I absolutely must have something early in the day, I’ll usually grab a bagel on the way out of the door.

WE’RE UP ALL NIGHT TO GET MUSEDMOOSE

Q4tQ: how big of an achievement hunter are you?

Asking because I got into doing a lot of achievements thanks to WoW, but those often came with rewards – mounts, pets, titles, etc. Achievements on Steam don’t actually get me anything, but I still feel compelled to do some of them – or worse, to try things just in case there’s an achievement for it that I don’t know. >_< So now I do a lot of telling myself I don’t need to do a thing just because there’s an achievement. It’s weirdly annoying.

Once you realize that you can ignore that achievement if it’s going to be something that is truly onerous then you’ll have a much better time I believe.

I used to go hard on achievement hunting, both in Warcraft and other games. Now, not so much. I’ll try and get the achievements with rewards that I want in Warcraft and I especially love getting my raid team the achievements from inside of the raid without them knowing I’m about to do it — when it’s something I can solo. The rest of the time though, I’ll usually just say “huh, neat” and go about my day when I accidentally get one, or get one of those “completed the tutorial” or “changed your armor appearance” achievements.

Next time we see each other it’ll be summer! Have a good week everyone, and don’t forget to pack lots of sunscreen when you go outside.