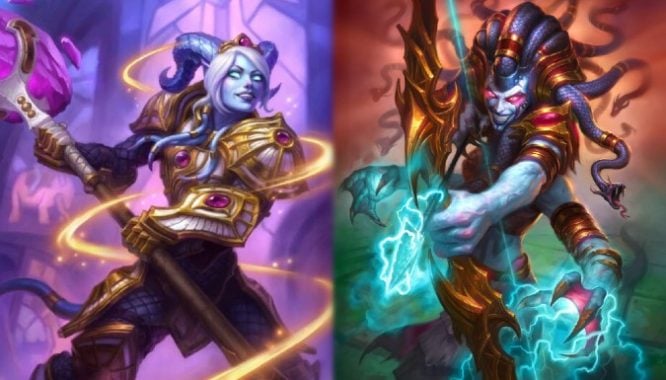 The Lobby Legends esports event for Hearthstone Battlegrounds revealed several upcoming additions to the game mode during this weekend’s matches, including the Lady Vashj hero. Amidst casting matches, casters Jia Dee and EducatedCollins got to showcase a new hero and nine new minions that will be entering the fray on the next major patch.

And it’s a speedy timetable from announcement to launch: these minions will be added to the game with patch 23.6, which releases today, bringing many other Battlegrounds changes with it. The new minions are mostly neutral, low tier, and seem to have “tech” functionalities for the most part. It looks like the Battlegrounds team’s goal here is to tinker with the game by adding more options in places that were lacking them, or more counters to strategies that needed to be pared down a little.

So let’s delve into it the Lobby Legends reveals and the other Battlegrounds changes coming in patch 23.6. 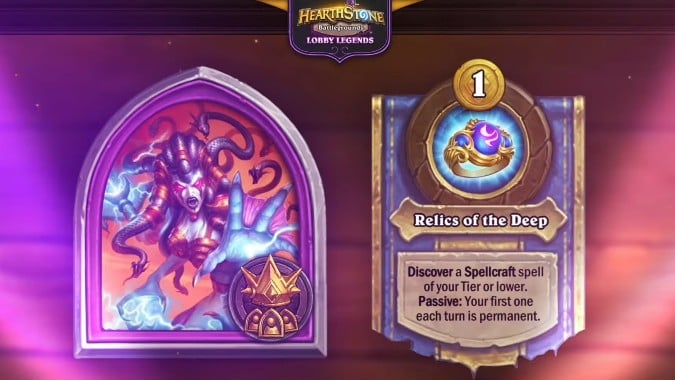 Lady Vashj seems potentially very powerful with the ability to make your first Spellcraft each turn permanent. You’re probably going to want to use your Hero Power often to find the best Spellcraft spells quickly — candidates include Shoal Commander for massive permanent buffs early on, all the way up to Waverider and Glowscale for the prospect of having a full board of Naga with Windfury and Divine Shield.

The downside is that you’re pigeonholed into playing Naga, which have a lot of synergy with Spellcraft, and being “forced” to play a specific tribe is always somewhat limiting for a player. On top of that, your Hero Power costs 1, which may not seem like much, but adds up to a lot less gold for you to spend on other things in the long run. 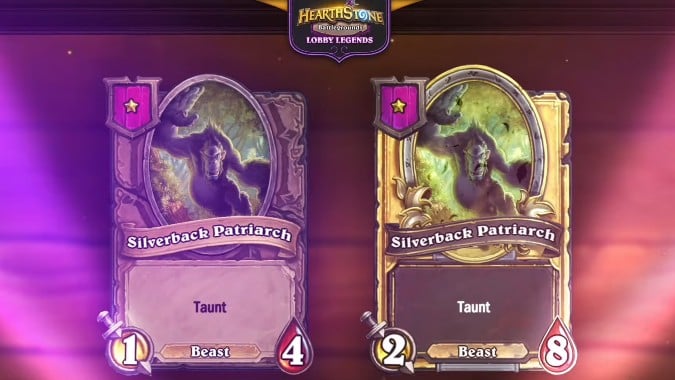 “It’s not a meme,” Jia was quick to say upon unveiling this announcement. Well, it isn’t: there’s a new tier 1 Beast which comes directly from Constructed — and which was the target of many memes in there due to its considerably weak stats for the cost.

In Battlegrounds, however, that’s probably not going to be the case: a 1/4 Taunt on tier 1 seems pretty good, and Beast compositions finally get an almost on-demand Taunt minion to protect their Scavenging Hyenas early on, or even their more powerful minions like Mama Bear later, depending on circumstances. 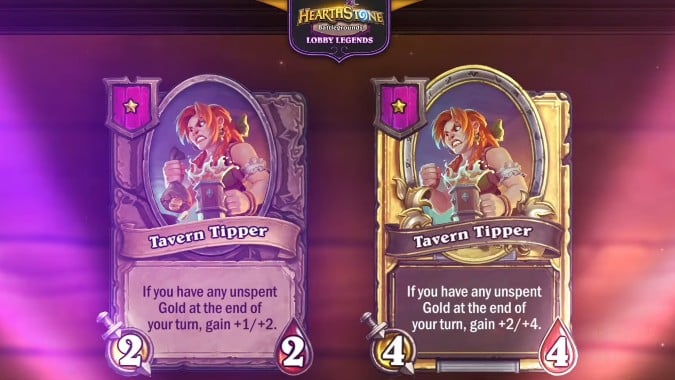 Tavern Tipper seems like a great tier 1 minion for pretty much everyone. Trading one gold for a +1/+2 buff in the early game seems like something that almost every hero or composition will want to do. All in all, she’s just a very flavorful minion (great art too!) that seems likely to become a solid early game staple for a lot of players. 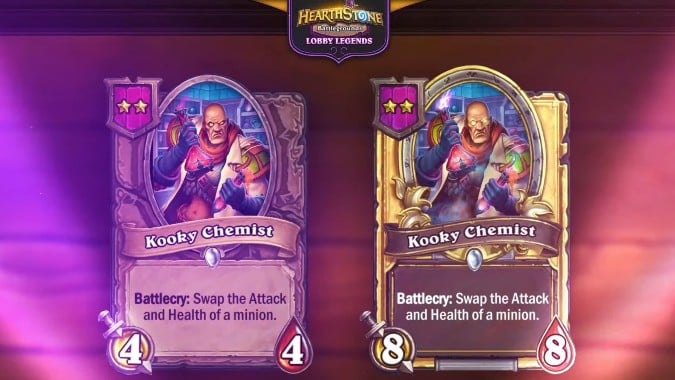 Another one arriving from Constructed, and all I can say is: wow. This minion has a lot of potential to completely change how Battlegrounds games are played — upon seeing it, EducatedCollins was quick to say that it’s “probably broken” and “will likely get nerfed.”

While we don’t know yet if this card will be that impactful, we can certainly imagine crazy possibilities, such as converting the high attack of an Evolved Chromawing into health, or abusing the hero power of the recently changed Pyramad to turn all of that extra health into attack on the right minion — such as a Cave Hydra or Foe Reaper 4000. I’m sure that the gears in many pro players’ heads are already spinning like crazy. 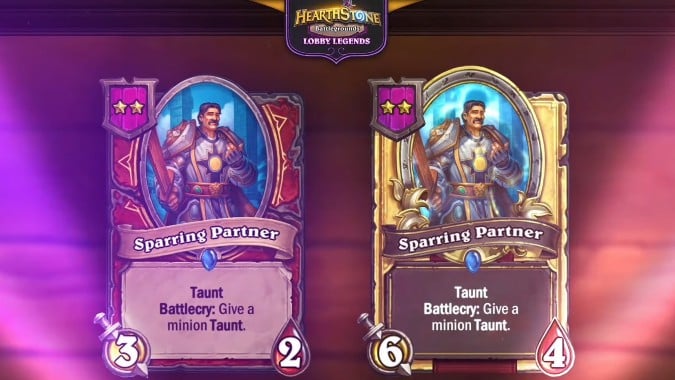 Among other things, this minion — which also comes straight from Constructed — might be a counter to the powerful “Pirate Scam” composition, as noted by Collins during the reveal stream. To stop that strategy from working, you ideally need to have low Attack minions with Taunt, like we talked about recently, and Sparring Partner is a new way to give Taunt to your minions.

Being on tier 2 should make it far more prevalent than the previous options. Defender of Argus on tier 4 is being removed, whioch only leaves Houndmaster, which is on tier 3 and requires a friendly Beast. In addition, the fact that Sparring Partner doesn’t increase the target minion’s stats can actually be seen as a benefit if what you’re trying to do is keep those nasty Pirates at bay. 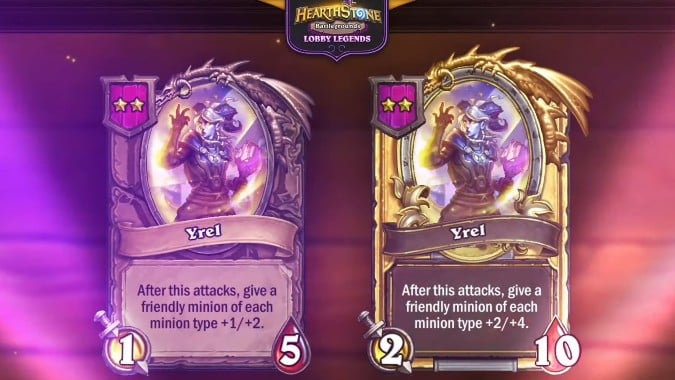 Although she’s a beloved hero from Warcraft lore with a ton of flavor, it’s pretty hard to evaluate just how impactful Yrel will be in Battlegrounds. At first glance, she seems like a piece that’s been missing for Menagerie compositions, but she’s not really a “buff engine” for them like Lightfang Enforcer, since her buffs are temporary, and require her to attack in combat first. Still, she’s definitely a boon for boards that have several different minion types in the early game, and that might or might not decide to consolidate into an actual Menagerie strategy later. 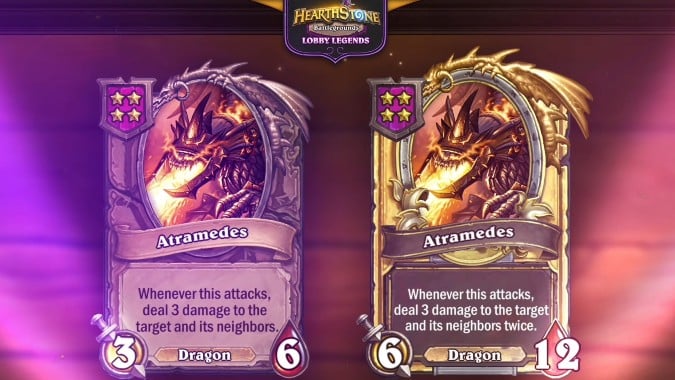 A minion that seems to combine the “shield busting” capability of Prestor’s Pyrospawn with a cleave functionality. On its golden version, Atramedes has a key difference from Pyrospawn’s effect, though: rather than simply increasing the damage, it actually deals damage twice, which might end up having certain gameplay implications down the line. Still, it seems like a solid minion for Dragons at first glance. 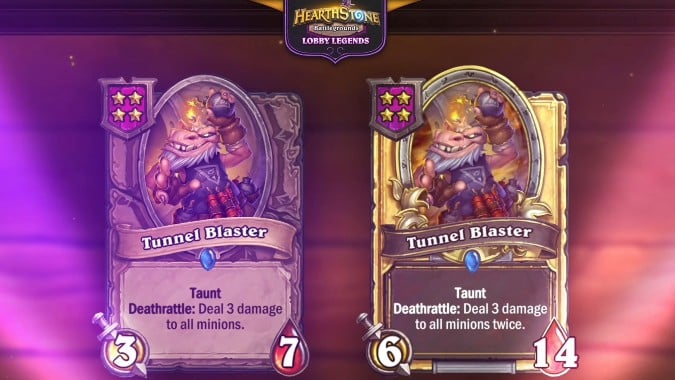 Did we need a stronger version of Unstable Ghoul? I’m not sure, but we’re getting one anyway! Tunnel Blaster is another minion coming straight from Constructed to become a “tech” card in Battlegrounds, giving players more options to deal with enemy boards that rely on Divine Shields, or on a bunch of small tokens.

But the fact that it’s 3 damage gives its Deathrattle a lot more potential. It can one-shot those pesky Leeroys, it can be combined with Baron Rivendare for a lot of damage when it dies — and there are probably even more possibilities. 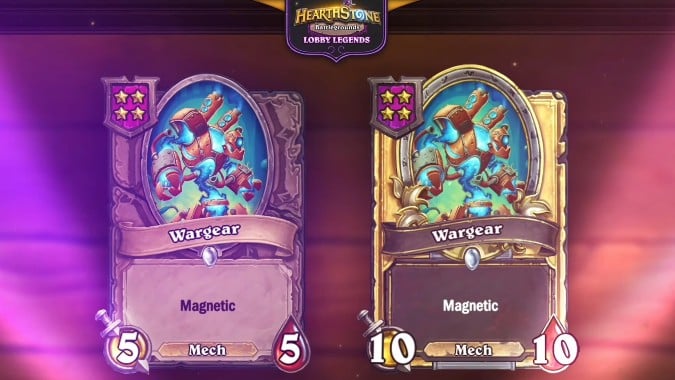 We hadn’t seen a new Magnetic minion in a while, and we’re getting another one that comes from Constructed, like most cards from this update. Mechs have been a pretty solid composition for a while now, but they did have one weakness: they couldn’t really scale up their stats as well as most other minion types in the game.

Wargear promises to give Mech players a little bit more scaling, especially in the middle of the game. It can definitely add some extra longevity to those early game Mechs like Pupbot — which you often grab right away, invest a few resources and buffs into, and keep using for some time. 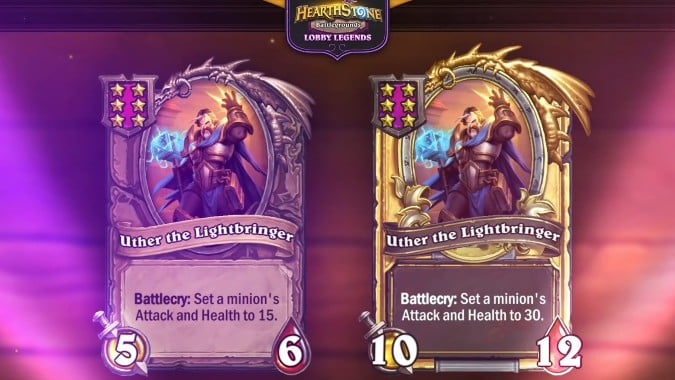 We finish with a bang! Uther the Lightbringer has a pretty crazy effect, allowing the player to turn any minion into a 15/15, or into a 30/30 on his golden version. Once again, there is a ton of potential just oozing from this card: using it on cleave minions like Cave Hydra quickly comes to mind. Based on the card description, it’s possible that he might be able to target minions on Bob’s tavern, allowing you to increase the stats of a Magnetic minion before using it.

Uther might be favored by certain heroes such as Vol’jin or Jandice Barov — the latter, in particular, opens up the possibility of reusing his effect over and over, which just sounds like something that some very smart player will find a way to break the game with. It definitely seems like Uther will be an impactful minion. 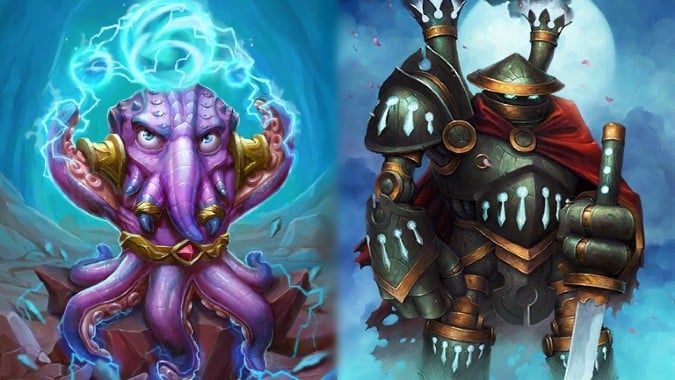 Two minions are returning, eight are leaving, and three are being changed

This patch will also bring back two minions from the past: Shifter Zerus and Iron Sensei. However, we’re also seeing a few of them leave the game mode. The full list goes as follows:

And there are also a few changes to the stats and/or functionality of three minions:

And there’s even more! Darkmoon Prizes are returning, and some of them have been changed as well — you can read all the changes at the official patch notes.