Prospecting and Milling is getting a much-needed update in Dragonflight 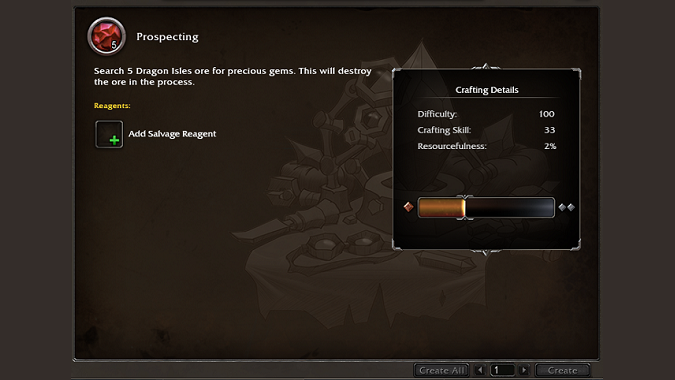 One of the main selling points of World of Warcraft‘s forthcoming expansion Dragonflight is a serious revamp of the profession system. We’ve already seen a preview of the new quality system for professions, and today Blizzard published more details on Dragonflight professions, including Milling and Prospecting which are both getting a much-needed update.

The key change is that these skills will no longer utilize a click-and-target action, which meant you had to individually click on herbs you wanted to mill or ore you wanted to prospect. Instead, they’ll leverage the new crafting interface as shown in the header screenshot: Milling and Prospecting will function like recipes, so they will appear in the list alongside your other Jewelcrafting or Inscription recipes. You’ll see separate options for each expansion, so simply scroll to the expansion, select the reagent you wish to prospect or mill, and then you can either set number of crafts or use up all your materials just like a normal crafting recipe. (The assumption is that the “mass” Milling and Prospecting recipes that have appeared in recent expansions are redundant with this new interface and will therefore be removed.)

It will also work with the new quality feature, at least when it comes to Dragonflight reagents. The higher your skill in Inscription or Jewelcrafting, the more likely you’ll be able to mill or prospect higher quality gems or pigments for use in crafting higher quality items. While there does not appear to be an option for finishing reagents, it does look like the new crafting stats such as resourcefulness will apply, and the use of profession gear and enchants should also help in the process.

While probably not the most exciting news to emerge from the alpha so far, it is nice that the development team is focusing on all aspects of professions. Milling and prospecting have always felt like chores, and while the mass option helped, it still felt like you were better off throwing together an awkward macro than using the tools as designed. While neither profession are available for testing in the first phase of alpha it shouldn’t be too long before we see how effective the new system is.