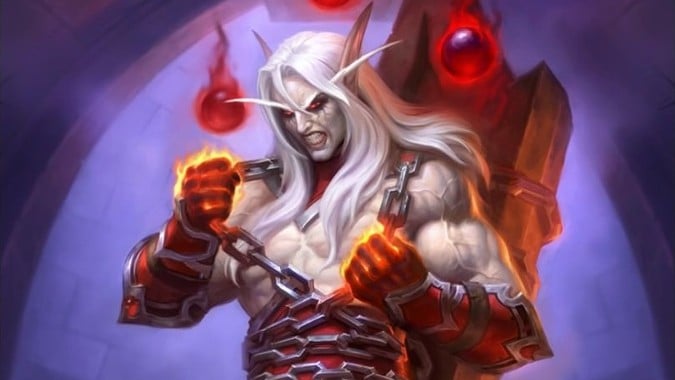 A new Hearthstone expansion means a new batch of interesting mechanics and flavorful cards, and Murder at Castle Nathria is certainly no exception. One key card from that set, Prince Renathal — which was released earlier and given to all players for free — is already drastically reshaping how some decks are built. And there’s certainly more to come.

We’re going to take a look at nine other cards that also bring interesting mechanics to the table, sometimes doing things that haven’t been tried before. A card that toggles back and forth between being a minion and a weapon? Cards that directly tamper with your opponent’s hand and deck? New archetypes being introduced, and old ones returning? Yes, all of that is here, so let’s take a peek at the most interesting cards in Murder at Castle Nathria. 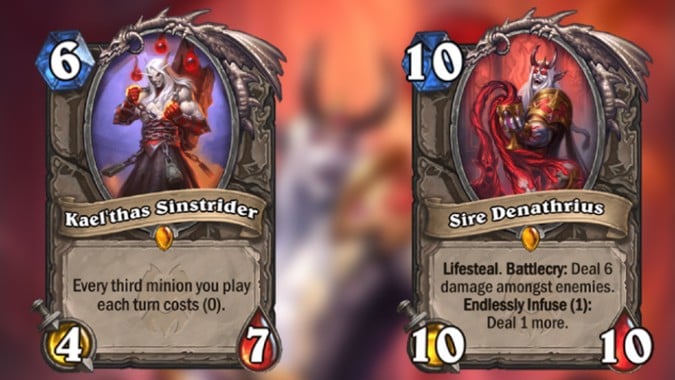 Oh man, that effect sure is one to keep an eye on. Kael’thas Sinstrider is a new take on the same old flavor: his previous version, Kael’thas Sunstrider, initially made every third spell you cast each turn cost zero, but was eventually nerfed to make them cost 1, since the effect was so powerful.

We can already think of many different scenarios where placing down the new Kael’thas, combined with a few cheap minions, in order to cheat out large, powerful minions for free could break the game. And I’m sure the Hearthstone team is also aware of that. Still, seeing this card eventually getting nerfed because it enabled some combo that was deemed “too powerful” wouldn’t surprise me in the slightest.

And speaking of large, powerful minions… Sire Denathrius has the hefty cost of ten mana, but his effect reminds us of other powerful minions from the past that also cost ten mana, such as C’Thun, in his many different versions. What most of those versions had in common was the ability to “pew pew” a lot of damage among your enemies — and *ahem* Sire Denathrius does the same, as long as he sits in your hand watching many, many friendly minions die. (The flavor is perfect, to be honest.)

Will such a costly card see play, without having too many other cards to support his effect? It’s tough to say, but some players are already envisioning a place for him in Druid decks — which could use many of those Whelps with Rush to bolster the Infuse effect, and then take advantage of the extra mana from Wildheart Guff to play Brann and Denathrius on the same turn, doubling his powerful effect. 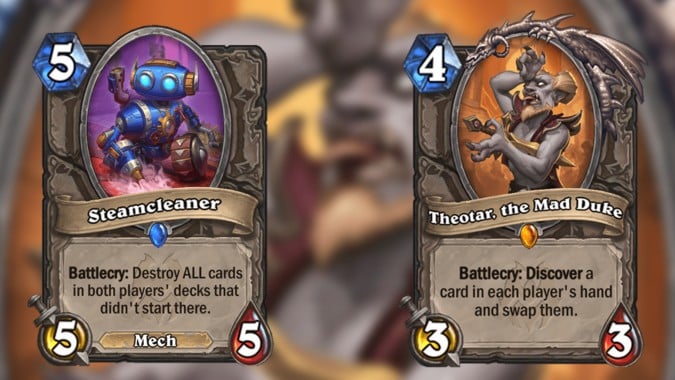 That’s a powerful tech card if I’ve ever seen one! Steamcleaner will make it much harder for decks based around cards like Kazakusan to work. It can also destroy the final reward from the Priest Questline, and possibly more: it’s still unclear if it will work with the transformed cards from Lady Prestor, for instance.

This is definitely a card to keep the game in check and make balancing easier. If any of those archetypes that win the game by adding extra things to the player’s deck ever becomes oppressive, players will be able to add Steamcleaner to their own decks for improved chances against it.

Not only is Theothar, the Mad Duke my favorite character introduced in WoW’s Shadowlands expansion, his Hearthstone version brings the exact kind of really interesting effect I like to see.

You can gather information about your opponent’s cards, you can disrupt their plans by stealing a fundamental card directly from their hand — kinda like Mutanus — and even the downside can often be dampened, since you get to choose which card you give to your opponent. Solid, solid! 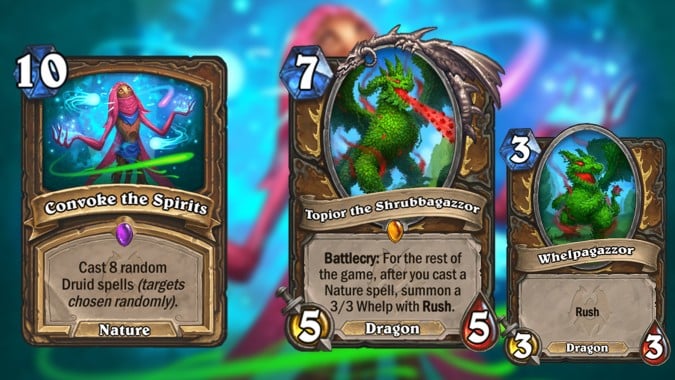 The transition from the World of Warcraft version of Convoke the Spirits to Hearthstone was flawless: the flavor of casting many random Druid spells is exactly the same on either game (despite the vastly different genres), which makes for a really cool card.

And the effect is nothing to scoff at either: historically, cards that cast a bunch of random spells have been good picks for certain decks, and Druid has many powerful spells it might be happy to get randomly.

Topior the Shrubbagazzor easily wins the “best name” award for the expansion, and the idea of an animated dragon-shaped shrub terrorizing the countryside amuses me greatly. But beyond the flavor, the card itself seems very solid.

The Druid class has been pretty enamored with the concept of summoning dragons lately — from tiny whelps with Rush to powerful Legendary Dragons with game-winning effects — and this is yet another tool in that particular toolbox. Seems like Dragon Druid decks are here to stay. 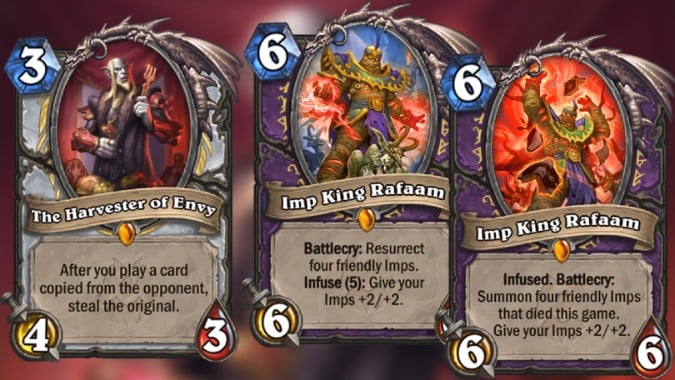 The Harvester of Envy (Priest)

Oh, Priest, you’re such a silly class. Always getting new cards that are sure to make players everywhere livid if they ever work against them. The Harvester of Envy is the latest version of that particular tradition.

Not only will Priest players get to copy cards from their foes, they’ll actually nab the original copies from them. There’s a chance that this card will not be particularly powerful — maybe it needs a few other cards to work with it in order to truly shine. But regardless of its power level, it’s sure to make some players rage at some point.

Rafaam is always coming up with some new scheme for ultimate power, and this time it’s summoning a bunch of Imps. Imp Warlock definitely seems like it might become a powerful new archetype for the class: it already has many older effects that summon Imps — including Dreadlich Tamsin — and Imp King Rafaam works as a perfect final piece to make it all come together. 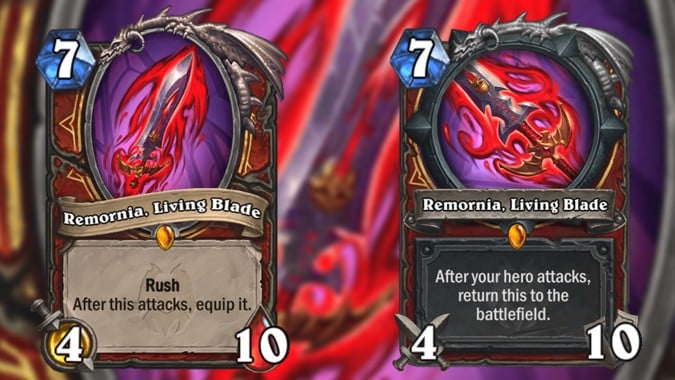 Possibly the most interesting effect on this list, Remornia, Living Blade is a card that starts out as a minion with Rush, but after attacking, becomes a weapon that your hero equips. Once it’s a weapon, the opposite journey happens: after your hero attacks with it, it turns back into a minion.

Attack and durability values are shared between either form, so players need to be mindful of that: Remornia is far more vulnerable when in minion form, since it can lose a lot of health in a single swing, whereas as a weapon it’ll only lose one, no matter what it attacks. Maybe this won’t be the strongest card in this set, but it’s certainly one of the coolest ones.

There are a few honorable mentions that we’ve already covered, such as Prince Renathal and Murloc Holmes, and perhaps a few more. Murder at Castle Nathria is certainly an expansion full of flavor and interesting mechanics unlike anything we’d seen before — and it’s here now, released on August 2, so it’s time to start experimenting.

Blizzard Watch is made possible by people like you.
Please consider supporting our Patreon!
Filed Under: Infuse, Murder At Castle Nathria
Advertisement