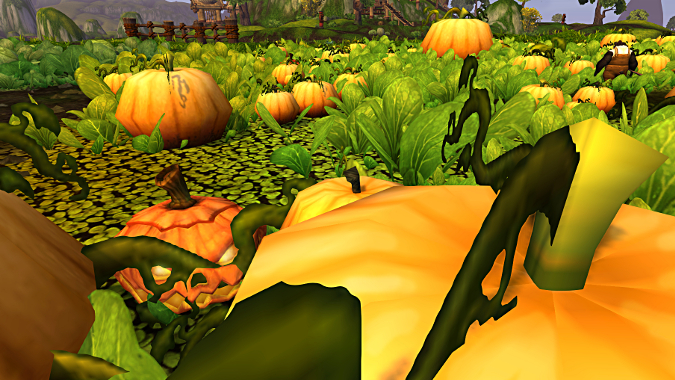 The pumpkins come, and with them, comes inevitably their spice. This is what the Humans prepare for.

This is The Queue, where you ask us questions and we’ll answer, but not before we spike the whole thing with cardamom.

Q4tQ: what classic type of monster would you like to see in WoW? My first thought is mimics. Drop a bunch of treasure chests or other innocuous interactable objects into the world, have some of them attack people, everybody wins.

Given the number of desert-based zones we have, and the tendency of the writing team to bring random figures back from the dead in some way, I’m a little surprised we haven’t seen more mummies running around. There are a few already, and pretty much all troll-based. But both in terms of climate (ie, what happens to dead bodies after a while if you leave them in a dry place) and in terms of the necromantic magic which is bizarrely commonplace for being so societally derided as “evil,” I’d think there would be far more of them.

Would a mummy version of an Illidan I definitely already murdered the face off of be any more compelling than one which was secretly alive for a decade, and then imprisoned unbeknownst to me or any major players that could inform me of this, and then brought back because reasons? Uh, maybe not moreso, but certainly on roughly equal footing in terms of suspension of disbelief, right?

QftQ: I was thinking, while the new leveling system does a better job at giving players a semi-coherent narrative and a more streamlined experience, it doesn’t actually do a good job at introducing players to the core of the Alliance and Horde. In Dragonflight, a new player will start off on an expedition on an island, spend about 10 minutes in Stormwind/Orgrimmar before going on an expedition to a different island, and then going straight from that to an expedition to yet another island. And while you meet a variety of characters that represent the various aspects of the Alliance and Horde, a new player wouldn’t really spend enough time experiencing the homeland of the main Alliance or Horde peoples to really understand them.

To put it more simply, the fact a person who rolls a Dwarf might not be directed to Ironforge until the right holiday event rolls around is down is downright weird if you think about it.

I don’t think there’s an easy solution, but I do think it’s a question worth considering.

I feel like they have to strike the balance here between building a satisfying beginning and context for a new character, and not overwhelming newbies with literally two decades worth of lore. I think having the core Alliance vs Horde conflict represented a small amount is enough, as opposed to delving into the full weight of the racial identity of each separate race.

That said, I do think they should maybe lead players to an offshoot questline later that does establish it. Something similar to the heritage armor quest lines, but without having to get all the way to Exalted first.

Q4tQ: In the Beta for DF have they redone something with the visuals for nighttime? In the posted pictures it looks really great. It seems updated. More realistic. I really like it!

I’m not sure how redone it is, but there is a definite difference in hue and saturation when day becomes night. It’s actually a bit of a problem for us, since the majority of our staff have regular 9-5s, and so most of our content is created outside those hours. There are definitely places which look great both day and night, but when we threw together our first gallery we were all kind of squinting at it. Isn’t this a little… dark? And yeah, yeah it is. Because they were all taken after work, or before work.

Unless somebody graciously takes a lunch hour to do screenshots, most of our visual media is “night time,” which isn’t the ideal way to showcase these gorgeous new zones.

You ever just get tired of gaming? Not want to sit in front of a PC or console or undock your switch to play it? Just want to sit down and watch TV or read a book or stare into space listening to Jazz Cafe with Rain Sounds for 8 hours?

I kinda miss having scheduled TV for this exact reason, but that’s a digression.

Weirdly, I’ve been gravitating toward games with a specific “chill” element to them. I wouldn’t necessarily call them cozy, though some are — my current favorite, Cloud Gardens, occupies a distinct liminal space with a deep sense of ennui. But most of them have really solid atmospheric sound design which persists in the background, and I frequently use that as a noise to write to, since my husband is a full-time telecommuter, and he likes to noodle on the guitar a little when he’s thinking. Today it’s Pink Floyd, which I only realized because a whole lot of clocks suddenly started chiming, which is a really great atmosphere when you’re trying to coherently answer questions, let me tell you.

I also recommend Dorfromantik and Islanders and Cozy Grove for similar purposes. The Long Dark would work too, but it doesn’t persist in the background, and also I don’t want my character to starve or freeze to death or whatever.

Q4tQ What’s your favorite book that was published in 2022?

They made new books? This century? Huh. How about that.

In all seriousness, my reading habits tend to be sharply divided between classic literature and more modern pulps. Most of the stuff I’ve read released recently is of the crime thriller variety, and I’ve been churning through a lot of them because I recently got an Amazon Unlimited subscription so I figure I better read a lot. Specifically I’ve been enjoying A. J. Rivers’ Emma Griffin series, and Freida McFadden’s The Housemaid. Both are decent, relatively quick reads. The Housemaid contains a lot of trigger-worthy topics, so I definitely wouldn’t recommend it to everyone. Heck, I’m pretty sure this isn’t the genre of choice for most of the Queuemunity. But hey, you asked!