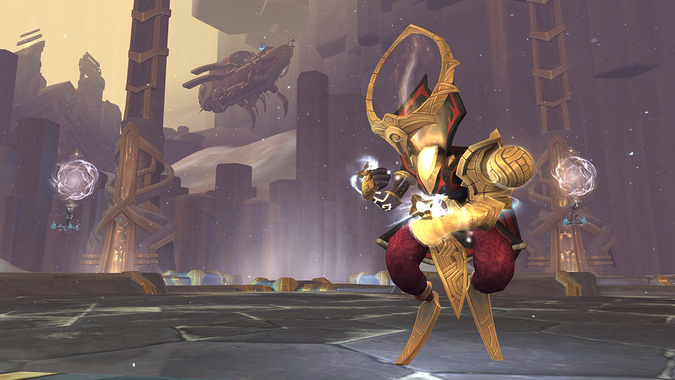 As of this week, if a raid group decides they want to do so, they can activate two raid-wide Fated Powers, essentially dealing with two mechanics to add complication to the raid encounters, and getting two raid benefits if they deal with both successfully. The Fated Power of a Fated Raid serves as a similar mechanic to the Affixes in Mythic+ dungeons — it’s a mechanic that adds a complication to the encounters in a raid, making the fight more complex but granting a buff to the raid group if the mechanic in question is correctly dealt with.  These buffs, called Fated Infusions, are a big part of what makes Shadowlands Season 4 so interesting.

So, as an example, we’ll look at the Chaotic Essence power. If the raid deals with the Essence, killing enough Motes to stack the power once the Essence is destroyed, they can gain a powerful buff to all raid damage and healing as well as damage absorbs. The raid will obviously have to balance the damage dealt by the Motes as they die with the desired buff once they kill the Essence before it casts it’s big raid-wide Chaotic Destruction spell.

So imagine you’re in that same raid and Chaotic Essence is out, and suddenly a Creation Spark goes off on the raid. If not handled, you’re almost certainly looking at a raid wipe. But if both of these powers are successfully dealt with, you’re looking at a stacking buff to all damage, healing, and absorbs raid wide and a stacking casting time, attack speed, cooldown reduction, and periodic damage tick buff that also increases your movement speed.

You can see why this would be attractive to a raid group running Fated Raids. Make the fight more complicated — and potentially more interesting if your raid group is skating through Fated right now — and get yourself two significant buffs that will make the fight go much faster. So far, so good. But while this is an excellent option for some, it does not come with an increase to loot drop rates, or item level of loot drops, so there’s no feeling of being forced to do so.

This past weekend’s esports charity event, Xy’mox’s Charity Cache, provided the players with additional Fated Powers in Fated Raids. Though this might have looked like a detriment at first glance, capitalizing on double the Fated Infusions turns out to be a boon!

We believe that this feature should be available to all organized players, and so starting with the next weekly reset, players in Normal, Heroic, or Mythic Fated Raids will be able to opt-in to one additional Fated Power at the Fated Console, located near the entrance of each of the Fated Raids. These additional powers may be disabled at any time, but that won’t affect any in-combat encounters, and will not change how loot is awarded.

We know that many players have enjoyed the twists and fun of Fated Powers, and we hope that access to more will increase the fun.

This means that this is an entirely optional change to Fated Raids, allowing your group to customize the added difficulty of the encounters, with successful play increasing the buff you get to help deal with the boss in question. Some raids will turn on the second power in order to gain that second buff, others will keep it to the single power because they don’t want the hassle of dealing with two Fated Powers per fight. It’s a customization change that I think is pretty cool, and completely optional to boot.