What do you think CD Projekt Red’s Project Hadar is? 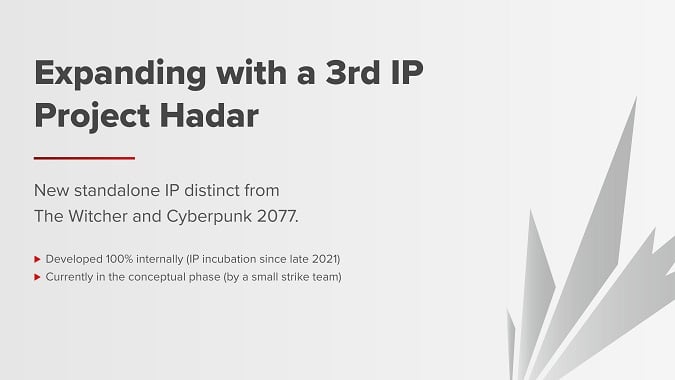 Earlier this week, developers at CD Projekt Red (CDPR) revealed their upcoming plans. While the news of a Cyberpunk 2077 sequel and more Witcher games got most of the press, I’m most intrigued by the announcement of a new IP project dubbed Hadar. So what could it be?

The fact that it’s a new IP is actually a big clue — we shouldn’t expect something like Arclight Rumble for the Witcher universe. While this doesn’t necessarily mean it’ll be an Action-RPG like their other two franchises, it makes strategic sense as a developer to keep doing what you’re good at while you work on building your own story.

The time period/setting of the game is the big question. It seems unlikely they’ll want to duplicate the environment of one of their existing games, but that doesn’t necessarily exclude a fantasy or modern setting as there are other ways to differentiate. The name Hadar is likely a big clue, and while it’s tempting to look at its various potential meanings as a name I think the fact that it’s the official name of the Beta Centauri system points us to a sci-fi setting. While Cyberpunk 2077 is technically science fiction, there’s a lot of room under that rubric to accommodate an outer space game that shares nothing with Cyberpunk — one wonders what CDPR could do with a Mass Effect-style game.

There’s another aspect to the star system Hadar that may be meaningful; namely that it’s nowhere as close to Earth as the more well-known Alpha Centauri system is. While the latter is a mere 4.4 light years away, Hadar is almost 400 light years distant — there are literally hundreds of thousands of stars closer to Earth than Beta Centauri. One is tempted to think that if they wanted an Earth-based spacefaring game they would choose a name indicative of that, such as Proxima (the designation of Alpha Centauri C). I could also see an argument that since it’s “Beta” Centauri, the game takes place in the second wave of post-Earth settlement, functioning as a pseudo-sequel to all the various franchises that have referenced Alpha Centauri as the first colony outside our solar system.

Of course, Hadar might simply be the name of a CDPR employee’s kid. I do think a space setting is in the stars for the new IP, but there are a lot of ways it could go. What do you think? Do you want to see CDPR create a new sci-fi game? Or would you rather they do something closer to or on Earth? And are you ok with another action rpg game, or do you want them to try something different?

Blizzard Watch is made possible by people like you.
Please consider supporting our Patreon!
Filed Under: Cdpr, Project Hadar
Advertisement