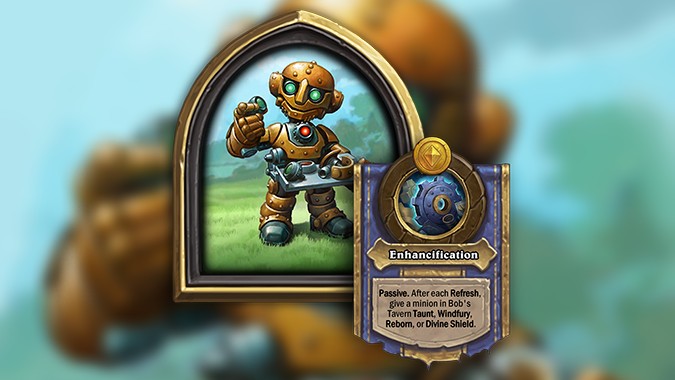 Hearthstone patch 25.0 has just hit the live servers, and it brings a new Battlegrounds hero, Enhance-o-Mechano. Originally a minion in Constructed mode, the Battlegrounds hero version of this mechanical creature has a similar effect: it’ll randomly dish out buffing keywords on minions, and you need to hope that luck is on your side and the right buff lands on the right minion.

His hero power, Enhancification, reads as such:

As for how likely the hero is to give each buff, the developers clarify:

The odds for each enhancification are equal (25%), except that a minion won’t be given a keyword it already has. So if ALL minions in a shop offering already have one of the keywords, it will roll something else.

This hero seems like it’ll require players to rely on luck a little. Not every keyword is valuable when applied to every minion in Bob’s Tavern — odds are that most of the time it’ll land on something you don’t really care for. However, there’s always the possibility of getting something truly impactful, such as getting extra Divine Shields when you’re playing Murlocs, or getting Windfury on minions with cleave effects, like Cave Hydra or Foe Reaper 4000.

Given that the hero power activates after every refresh, the longer a game goes, the higher your odds are of finding something good. With that said, refreshing is something you should not be doing a lot of early on — if you want to win, you want to spend your gold on buying minions and upgrading your tavern tier. Refreshing only becomes a “reliable” action later in the game, when you already have an established board presence.

Thus, when playing Enhance-o-Mechano, you probably want to play it safe, get yourself a sturdy board that can carry you into the late game without taking many risks, and then begin really trying to reap the benefits of his hero power. If luck smiles at you and you happen to get a combination of good minion and keyword before that, though, do take advantage of it — just don’t expect it to be the norm.

But Enhance-o-Mechano isn’t all that patch 25.0 is bringing to Battlegrounds: a new quest reward, Enhance-a-matic — which can be used by any hero — is themed after the same idea, giving you cards at the start of each turn that you can use to buff your minions. These cards always combine a +5/+5 buff with a specific keyword (Taunt, Windfury, Divine Shield, or Reborn), just like the hero does — and much in the same way, the odds for each keyword are the same, 25%.

There’s even more in this patch besides this new hero and new quest reward, so you can check out the official blog for all the news, including small updates for Constructed, Mercenaries, Duels, and Arena, as well as assorted bug fixes and improvements.