Beginner and budget strategies for getting this month’s free Hearthstone card back — only a few days left! 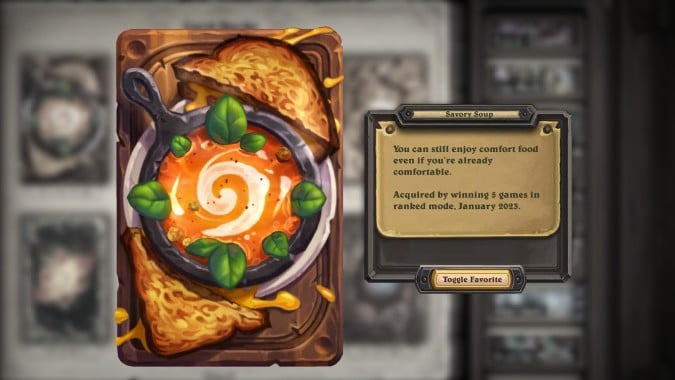 Every month, Hearthstone offers a free card back, and to get it, you need to win five games in ranked mode, which may seem tough if you’re new to the game — or favor a different game mode and want to use this month’s cool card back while you play. In this article, we’ll highlight a few cheap decks that can help you accomplish that goal if you don’t know where to start with Constructed Hearthstone — especially since there are only a few days left for you to earn the card back.

The current Standard meta is really fast. Since the nerf to Prince Renathal, players are favoring decks that end the game quickly, making matches shorter, in general — Control strategies are not in fashion. You need to be mindful of that: In the current environment, you’ll want to make sure you can beat your opponents before they can unleash their own win conditions at you. Though now, at the end of the month, things might be a little less hectic due to the recent balance changes.

With that in mind, here are a few decks that might help you win those games as easily as possible — including a few budget options for players who don’t have a large card collection. 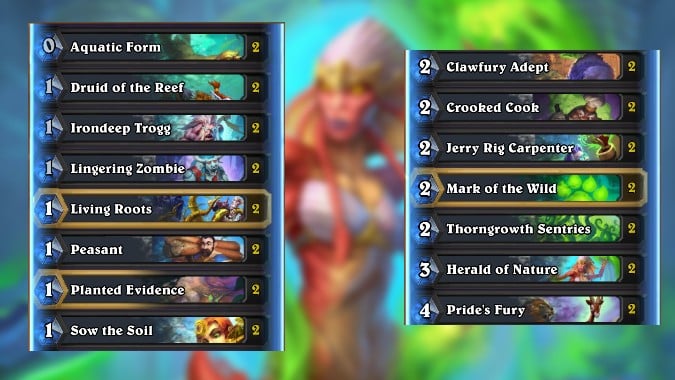 A true “budget” option, this Aggro Druid deck has no Legendary cards but still maintains a global 59% win rate as of the time of this writing (according to non-official website HSReplay). When piloting it, your game plan is to win the board: You’ll want to make sure that your minions hit the board and stick there. The key is to play minions faster than your opponent can remove them, and then buff those minions — especially with Pride’s Fury and Herald of Nature, your strongest cards.

The biggest weakness of this deck is that it runs out of gas really quickly. Your cards are very cheap, and you’ll want to play them early, so it’s not uncommon for you to find yourself running out of options to make a comeback. To prevent that, try to draw as many cards as possible with both Peasant — which you want to play when it can be protected by taunt minions (remember to use Thorngrowth Sentries and Mark of the Wild) — and Crooked Cook, which you’ll only want to lay down when you can guarantee you can deal three damage to the enemy’s face. 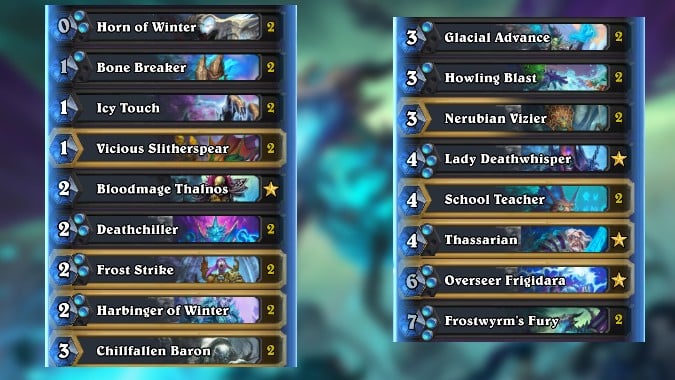 This is the most expensive deck we’ve curated this month, so be mindful of that: It requires a larger collection of cards — or a larger expenditure of dust to craft those cards. Still, if you decide to play it, your game plan is very simple: Blast as many frosty spells at your opponent’s face as possible. You’ll win the game by dealing direct damage, like a Mage would.

Your spells deal direct damage, but they’re very good at controlling the enemy board as well: Frost Strike and Howling Blast, in particular, will be a great help at ensuring you survive, while Glacial Advance and Horn of Winter offer powerful mana-cheating effects, letting you cast many spells at the same turn. Make sure to do exactly that when you have a Deathchiller or two on the board, and you’ll be dealing sprinkles of collateral damage that really add up.

But the star of the show is, without a doubt, Frostwyrm’s Fury: It deals direct damage while also developing your board with a 5/5 minion, and it freezes the entire enemy board. This is your most powerful win condition, and many games are often decided by your ability to cast multiple copies of this card turn after turn. And we do mean multiple: With the help of Lady Deathwhisper, it’s certainly possible to generate more copies than just the two you start with. 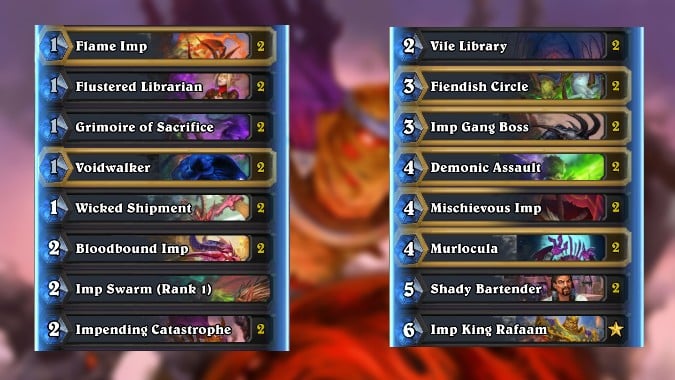 Imp Warlock comes in many flavors these days — some use Curses, while others enlist the help of Sire Denathrius — but we picked the most simple (and budget-friendly) one, where your mission is simply to flood the board with Imps, buff them, and win.

Impending Catastrophe is arguably your most powerful card. Don’t be too greedy: It’s okay to cast this when you have just two or three Imps on the board — not that hard a task when you have cards like Wicked Shipment, Imp Swarm, Fiendish Circle, and Mischievous Imp. Drawing those cards will greatly increase your odds of winning. Make use of Vile Library at those times as well: Try to place down that location early on, if you can, and buff one of your imps immediately after summoning them. But for the Library, it pays to be a little greedier and use it when you have more Imps than just two or three.

You’ll probably be summoning Imps over and over again, many times throughout the game, but don’t take too long to attack: Sooner or later, you’ll need to use either Shady Bartender or Imp King Rafaam in order to massively buff your Impish horde and seal the game. The current meta is fast, and this deck can fall behind if you’re not careful. 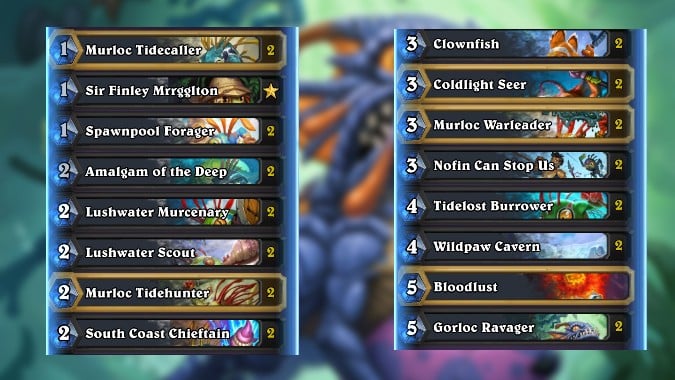 This deck plays somewhat similarly to the Aggro Druid deck highlighted above: The key to victory is making sure your minions stick, and then buffing them, with cards like Nofin Can Stop Us, Murloc Warleader, and especially Bloodlust, to deal the finishing blow. The difference is that this deck has fewer ways to buff, and it doesn’t summon minions as quickly as that one either — but to compensate, you’re much more flexible at controlling the board and dictating the flow of the game.

First of all, drawing is not a weakness for Murloc Shaman: Clownfish, in particular, is a key card in letting you find and play your other Murlocs, as are Tidelost Burrower and Gorloc Ravager. You can also generate more Murlocs in the middle of the match with Amalgam of the Deep. And you have strong tools to help you control the board: Lushwater Scout gives Rush to your Murlocs, allowing you to dictate trades, while South Coast Chieftain can pick off pesky minions that might be in your way.

Hopefully you’ll find success with one of these decks. May your games be fun and fruitful!