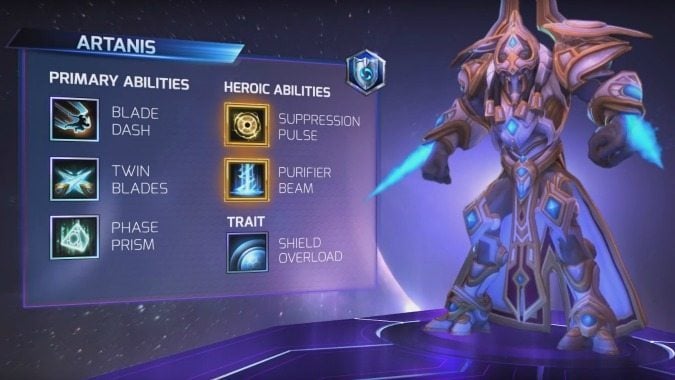 Heroes of the Storm: Artanis guide

Artanis is a StarCraft Warrior that can be played one of two ways: either as a secondary tank or a beefy, late-game Assassin. Why not a main tank? Limited mobility options, limited ability to peel enemies off teammates, and no team fight initiators all make him less than ideal as the main. But as the secondary, he can shine. Alternately, just play a waiting game while he levels and take all his DPS talents to become a Zeratul-like terror by level 20. Think Sonya with her ability to disrupt, damage, and survive — Artanis is very similar.

Shield Overload (D): This trait is what make Artanis unique as a tank. His real tankiness doesn’t kick in until he drops below 50% health and his shielding kicks in. Healers in the group can conserve their mana for others, but should give Artanis a heal when he drops below 25% health. Recent shield testing on Reddit has shown that when multiple shields are involved (such as Tassadar’s or Abathur’s), damage will go through shields in the order they are applied to Artanis. Remember that his basic attacks reduce the cooldown on the shield refreshing so when you get in a fight, stay in. You have no escape abilities anyway so go all in.

Blade Dash (Q): While this looks like a great opening move or harass tool against opponents, it’s more valuable as a waveclear ability or way to dodge away from an incoming AE attack. When you try to use this against your opponents, you often take a lot of damage during your dash from auto attacks, can be stunned so you don’t return to your original position, or end up drawing fire from turrets. That said, with limited tools to catch a fleeing opponent, using this to finish them off doesn’t hurt. Whatever you do, be aware of your positioning, where you are dashing to, and that you do more than twice the damage on the return trip.

Twin Blades (W): This damage ability is the key to a lot of what Artanis can do. Properly talented, Twin Blades can make him a killing machine or bolster his tanking abilities. The short cooldown makes it especially useful. Don’t worry about using it too often, as Artanis rarely has mana issues.

Phase Prism (E): This is one of those showy abilities that draws people to play this hero, but as a skill shot it takes careful aim to use it right. A recent patch has increased the movement speed by 15%,  making it tougher (but still possible) for enemies to dodge out of the way. The range (like the speed, recently buffed by 15%) is relatively short, so your dreams of catching fleeing opponents with this may not be fulfilled as often as you like. And, like Anub’arak’s burrowing ability, you have to make sure you don’t end up trapped behind an enemy gate when you use it to pull an annoying opponent out of their safe zone.

What is it good for? Pulling Assassins in the backline to the front for your melee group members to take down, pulling enemies into AE damage abilities set up by your group mates, getting out of traps like Nazeebo’s Ring of Zombies and disrupting channeled abilities by forcing the enemy to move.

Purifier Beam or Suppression Pulse (R): One drops a beam that slowly follows an opponent for 8 seconds doing 400 damage every second and the other is an AE blind (miss the next auto attack) for 4 seconds along with 250 damage. Both can be cast anywhere on the map. See the Talents section for our in-depth analysis of these abilities, but the short version is pick Purifier Beam if for DPS build and Suppression Pulse for tank build. 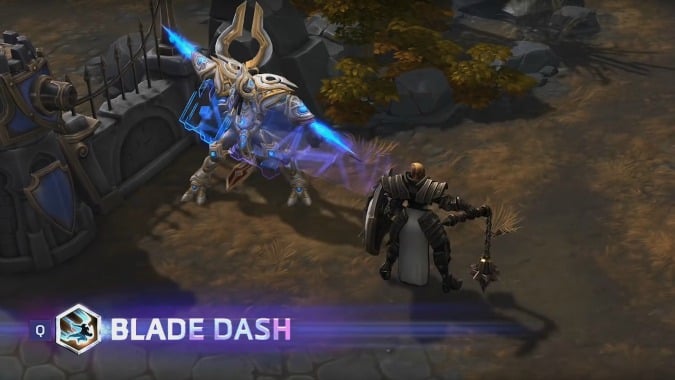 Tank build: Reactive Parry will give you extra survivability.

DPS build: Seasoned Marksman is great for the slow growth that Artanis’ DPS build is all about. When his Blade Dash (Q) can clear entire minion waves in one pass, you’ll see the basic attack bonus stacking up quick.

DPS build: Lethal Alacrity is useful not so much for the extra range but for the faster speed. The quicker the Blade Dash can be completed, the less time you are vulnerable to be stunned out of it or not auto attacking to reduce your shield cooldown.

Tank build: As mentioned above, Psionic Synergy helps you with quicker shield activation.

DPS build: Many players are taking Solarite Reaper, but Follow Through is more valuable when you can cycle through Twin Blades and auto attack non-stop for focused damage. As a bonus, this will trigger your shield more often giving you sustain in the fight.

Tank build: Suppression Field, though low damage, will increase survivability in a team fight through its elimination of enemy autoattack damage for four seconds. And this talent isn’t just for you, but for everyone on your team in the fight. This can be cast globally so you can be of use in a fight you are not even near in case one of your teammates gets ambushed.

DPS build: Purifier Beam does a massive amount of damage and though it follows the targeted enemy, it does so at a slower pace than basic run speed. So for maximum effectiveness, it needs to be used on enemies that are slowed, frozen, stunned, or trapped in some way (like Leoric’s Entomb) otherwise they’ll just outrun it. On the upside, dropping this on the enemy team when they are trying to take down a boss will throw them in disarray and may allow your team to steal it.

Tank build: Phase Bulwark reduces the damage from abilities which will help Artanis survive burst damage from Jaina, Kael’thas, and other heavy hitters.

DPS build: Triple Strike is where Artanis starts to really shine as a bruiser. This talent gives him great burst damage and resets the cooldown on his shield activation even quicker — and all the while his other abilities give him the tankiness to survive as a melee damage dealer.

Tank and DPS build: Zealot Charge gives Artanis one of the critical tools that he lacks: mobility. It can be very frustrating to chase a low health enemy knowing you can’t catch him or to run up to engage an enemy that will flee before you get close enough. This talent gives Artanis the ability to close the distance and execute burst damage if he took Triple Strike. A dash for a melee hero is critical and that makes this ability win out over others at this level.

Tank build: Force of Will makes your shield trait activate even faster. More shielding equals more life for Artanis. You’ll get more use from this than from the improved Suppression Pulse talent.

DPS build: Nexus Blades will give you a nice damage boost, but more importantly will apply a slow to your target allowing you to keep them in range for your other melee attacks. Given Artanis’ lack of mobility, this is critical for keeping enemies from fleeing. Take this over the improved Purifier Beam talent. 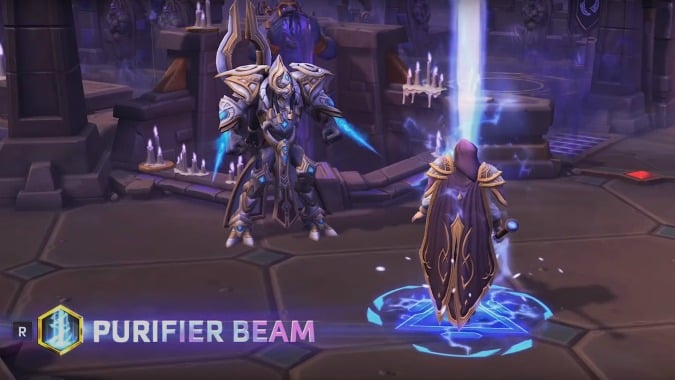 For the secondary tank build the key is to always be auto attacking. That lowers the cooldown on your shield trait which is going to keep you in the fight longer. You have talents to reduce (and in the case of your ultimate ability, eliminate) auto attack damage, reduce ability damage, trigger shielding, quickly chase down runners, clear waves of minions, and pull enemies out of position to be picked off by your teammates. You’re tanky enough to survive long enough to do some damage, but if you’re caught alone or focus fired upon by the entire enemy team, don’t expect to survive very long regardless. Above all, be careful of your own positioning and don’t let the lure of your Blade Dash or your Phase Prism put you in a vulnerable position. This positional awareness will separate the good Artanis players from the bad ones.

For the DPS build, your rotation in the late game should be Twin Blades and auto attack. Sounds simple, but you’ll be doing crazy amounts of damage with Triple Strike and Follow Through triggering off of Twin Blades and shielding activating over and over with auto attacks. The real trick is not getting crowd controlled or kited. Use your Blade Dash to avoid skill shots and Phase Prism or Nexus Blades to catch enemies out of range. And use your Purifier Beam to disrupt your enemy focusing on a goal like a boss or when they are going to be crowd controlled. Don’t forget to use Blade Dash to clear minion waves for stacks of Seasoned Marksman to increase your basic attack damage.