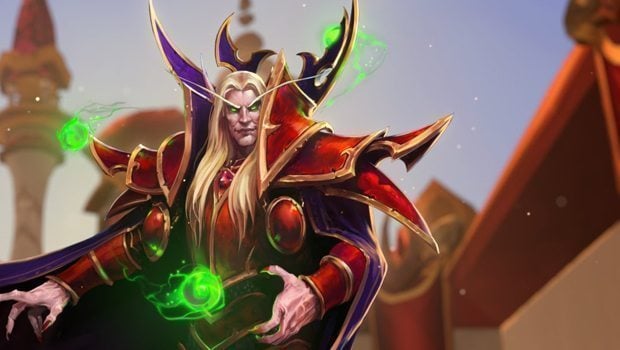 Heroes of the Storm: Kael’thas guide

Between his recent price drop and crazy damage potential, Kael’thas Sunstrider is a hero that has seen a lot of traction recently. If you’re still on the fence about picking up Kael’thas or waiting for another hero to come along, perhaps this guide will help! And if you want to see your skin options for Kael’thas, check our skins guide.

Kael’thas is a ranged assassin, throwing spells at enemies from afar and hoping he isn’t punished for it. His area of effect (AOE) damage is out of this world, and his stun in Gravity Lapse is strong as well. However, while Kael is skilled at dealing damage, he can take very little in return. He is very susceptible to snares, stuns, and generally being focused down as he has zero ability to escape a dangerous situation outside of his own two legs. But make no mistake, this glass cannon is a force to be reckoned with in the right hands.

Flamestrike – For the most part, Flamestrike will be your bread and butter ability for clearing lanes and dealing AOE damage. This ability is cast on the ground, not on a player or unit, so proper placement is very important. Using Flamestrike while you have stuns out (Gravity Lapse, for example) will guarantee this damage, meshing nicely with the Ignite talent.

Living Bomb – A targeted damage over time spell, Living Bomb is the crux of Kael’s combo. Even though the double Living Bomb effects from Ignite and Chain Bomb were recently hotfixed out, this ability is still quite strong. Often an enemy will attempt to flee with a Living Bomb on them and either blow up an injured teammate or, with the talent Chain Bomb, spread the debuff to minions, structures, or other heroes, making Living Bomb a very mana efficient ability.

Gravity Lapse – Gravity Lapse is a skillshot stun that picks up the affected enemy for 1.5 seconds. It will stun the first enemy hit, so make sure your aim is true lest you tag a minion. This is a great ability to initiate burst damage and is the first part of the Kael combo.

Phoenix – The first of Kael’s heroic abilities is Phoenix, a persistent AOE effect that damages any enemy heroes caught within its radius. This heroic works amazingly well with effects like Maw, Mosh Pit, Arreat Crater, and anything else that works to keep an enemy team in one area. Additionally, Phoenix can be used to zone enemies away from objectives and help cover retreats. A well placed Phoenix can help a boss camp change hands or prevent enemy heroes from turning in coins.

Pyroblast – The yin to Phoenix’s yang, Kael’s second heroic ability, Pyroblast, forgoes a lot of AOE damage in favor of heavy single target damage. Pyroblast does have a 2 second cast time which, in a game as fast-paced as Heroes, can feel like an eternity. The tradeoff here is that Pyroblast hits like a truck. For the most part the damage from this ability is unavoidable as the fireball slowly makes its way towards its target, though there are a few ways (Uther’s Divine Shield, for example) to prevent it.

Heroic abilities and abilities gained from talents cannot be empowered and, as such, will not consume a sphere when used. Each sphere regenerates 6 seconds after it is used with an ability, and since doing so costs no mana, maximizing your use of the trait is very important. Spheres can be primed while mounted, allowing you to instantly cast a huge Flamestrike or stun 3 enemies as soon as you reach the battle.

That said, there will be occasions where you won’t want your first cast to be empowered — if you’re chasing down a single hero, you will likely want to empower your Living Bomb and not your Gravity Lapse, though you will need to use Gravity Lapse first to guarantee you get the rest of your damage in. 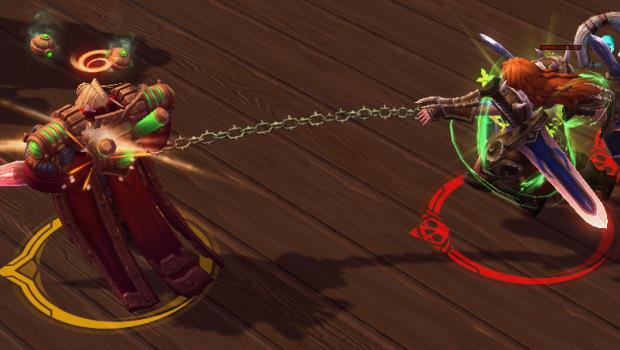 Kael’thas shares the typical strengths and weaknesses of most other ranged assassins, but of course there are a few things unique to the Sun King:

Despite Blizzard’s classification of Kael as an “easy” hero, mastering this mage is far from it. Landing your Gravity Lapse, placing your Flamestrike well, and using your spheres exactly when you need them are all important skills to develop as you level Kael’thas, but the most difficult thing for me when I play him is simply staying alive. With no escape and barely any health, one false move will send you back to the Nexus, leaving your team at a disadvantage until you can resurrect and do it all over again.

With the right team, however, Kael can harass and kill heroes like none other. Having a strong front line with warriors like Anub’arak and E.T.C. is important in keeping the pressure off of you, allowing you to safely cast from the back of the group. If you get jumped by a fellow assassin or focused in a team fight, there’s not much that will be able to save you; as such, having a good healer isn’t terribly important. However, a support with some form of crowd control such as Uther’s Hammer of Justice or Tyrande’s Lunar Flare pairs very well with Kael’s desire to burst enemy heroes down in a short time.

Talent-wise, Kael’thas has seen very little variation since his debut. Most are a derivation of this build, with the heroic ability and level 20 talents chosen based on team compositions and map selection. Let’s break it down by level:

Level 1 You are almost definitely going to be taking Mana Addict. Kael’s burst damage comes solely from his abilities, so without this talent you’ll likely be out of mana very frequently. Note that getting a sizeable benefit from Mana Addict requires you to be pushing lanes and gathering regen orbs the first half of the game, which is fine because that’s what you and your team should be focused on anyway.

An honorable mention goes out to Fel Infusion as a decent source of healing when you get queued without a support. Like I said earlier, though, Kael can take so little damage that often times healing is inconsequential.

Level 4 There are a few more viable options in this tier than its predecessor. Personally, I usually prefer Nether Wind as it makes Gravity Lapse much easier to land, making your combo easier to set up and pull off.

Gathering Power is another decent option, increasing the power of your abilities by 5%, up to a maximum of 15%. The trouble with this talent is that it’s very hard not to die as Kael while also going for takedowns, so your stacks likely won’t reach past 10% very often. However, as you get more experienced with Kael’thas and grow more confident in your ability to keep yourself alive and land Gravity Lapse frequently, Gathering Power should be your go-to this tier.

Envenom is a mediocre choice at level 4 — even though it’s a powerful DOT, you need to be very close to your target to apply it. A bit too risky for my tastes.

Level 7 The only talent you’ll regularly see anyone take at level 7 is Fission Bomb. Living Bomb is such an important part of your arsenal that it’s hard to pass up a 75% damage increase. It also helps that the other talents on this tier are very lackluster.

Level 10 Heroic abilities are available at level 10, and Kael’thas is fortunate enough that both of his heroics are quite viable.

As mentioned earlier, Phoenix is a great AOE ability that can be used to either deal a large amount of damage to a cluster of enemies or discourage enemy heroes from walking through it. Phoenix shines on maps with tight geometry like Haunted Mines or maps with regular turn-in locations like Blackheart’s Bay.

Pyroblast, on the other hand, is best used to snipe squishy enemy heroes. Ideally you’ll need to have faith in your front line’s ability to keep the enemy team from interrupting your cast, as well as ripe targets like Jaina or Nova. 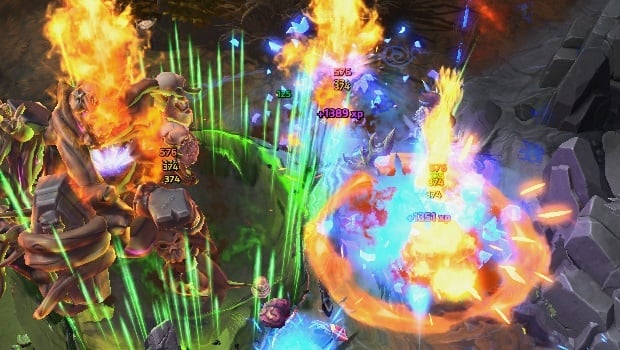 Level 13 This tier has undergone a slight upheaval as the recent hotfix nerfed Living Bomb’s ability to double up on targets, making Chain Bomb no longer a “must have” talent. With that change, Flamethrower has seen increased use as it allows you to deal damage from a much more comfortable distance. Chain Bomb is still quite good, though any upsurge in representation of chase-crazy heroes like Illidan and Zeratul certainly leads me to choosing the safer route.

Level 16 Much like level 7, level 16 is a tier in which you’ll find little variation. Ignite is typically the default talent selection here. This makes team fights with AOE stuns on your side absolutely lethal for the opposing team.

Backdraft would make more sense if Kael’thas was tankier and had some sort of chasing/escaping ability. Gravity Throw might be decent if your team doesn’t have adequate crowd control to set up and land plays, though being queued into a team without any such abilities would be quite rare. And I can appreciate Arcane Barrier’s attempt to synergize with Mana Addict, even though shoring up Kael’s defenses is akin to stapling two tissues together. While some of these talents might be alright in certain situations, Ignite is just too powerful to pass up.

Level 20 The final talent tier offers upgrades to Kael’s heroic abilities as well as Bolt of the Storm and Arcane Power. Note that if you took Pyroblast you won’t be able to take the upgrade to Phoenix and vice versa. Either upgraded heroic ability is viable and reinforces their respective niches.

One of Phoenix’s biggest weaknesses was that, once you sent it out, the AOE was completely stationary. Rebirth lets you move Phoenix once after you cast the ability, allowing you to chase down enemies or readjust your zoning. It also double the duration of Phoenix, essentially giving you two consecutive casts.

Presence of Mind is a bit odd in that it encourages you to fire Pyroblast into a stack of enemies rather than a squishy in the back that you might be able to one-shot. That said, if you manage to tag the entire enemy team with the explosion, your next Pyroblast will be up immediately. Faster cooldowns, more throughput, bigger numbers — that’s just how Kael’thas likes it.

While the upgraded heroics are handy, they typically will not beat the utility of Bolt of the Storm. Finally, Kael has access to an escape and he only had to wait 19 levels to get it! Being able to stay alive at this point in the game is very important, and with Bolt of the Storm you could very well pull an enemy or two out of position as they try to chase you down, leaving the enemy team stretched thin and the friendly team ready to pounce.

Hopefully you’ve gained an appreciation for how powerful a skilled Kael’thas can be and aren’t too discouraged by his fragility. Kael is certainly a hero that I’m going to be putting more time into; the interaction between his trait and his abilities makes his playstyle very, very interesting.