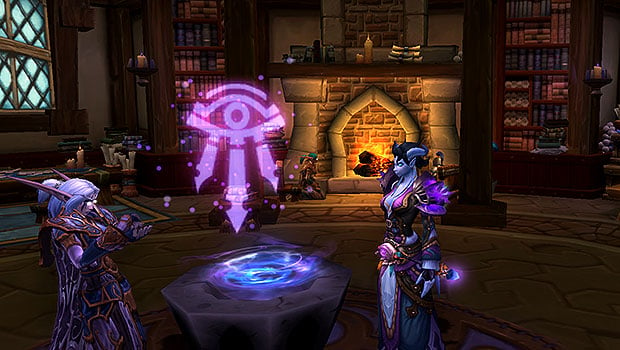 Here we are, mage friends, in someplace completely new. All of the bricks are freshly laid. We’ve got our bookshelves set up, portals have been arranged to all of our favorite places and there’s a magical fire in the hearth. Everything has that new book smell and we’re all feeling like we could conjure anything!

In the spirit of that, we’re also adopting a new name. The best thing for me about Warlords of Draenor so far has been the existence of my garrison. It’s a little corner of the world that’s entirely mine to putter around in as I wish. Coincidentally, that was the best thing about this column, too. It wasn’t the bricks and mortar that made it, it was the community of fellow spellslingers that cared about it. I tried to choose a name that reflected that; a place of discussion for wizards of all stripes. So as we set up shop here, I hope it feels familiar but also fresh. We brought the comfy old rug. Every mage is welcome for spirited discussion, commiseration, and cookies. We never forget the cookies. Make yourselves at home.

Some of you may know me from before, but in case my face is entirely new to you I’ll tell you a bit about myself. I’ve raided as a mage primarily since late Burning Crusade. I’ve seen Blast Waves come and go and read many a patch note. I once had an Evocation problem. I enjoy being better dressed than other clothies, conjuring mana confectioneries, and fighting with my guild’s warlocks — not necessarily in that order. I waited a long time for a mage tower of my very own. I really like obliterating things in a torrent of magical power, and I hope you do too, since that’s what we’re going to be talking about here.

Since we’ve missed out on the first part of Warlords, let’s not dwell on what’s behind us for now. As of this writing, patch 6.1 has been confirmed this upcoming Tuesday! The patch will soon be upon us, and I’d like to take a look at the changes that are relevant to mages.

First of all, this is a garrison building change and it may not apply to all of you, but I’m going to guess it applies to many of you. If you have a Mage Tower/Spirit Lodge, you’ll now be able to use Ogre Waystones to start work orders that will reward Apexis Crystals, as well as a chance to receive an item that allows instant completion of an in-progress mission. Secondly, party members who visit your garrison will now be able to use your building’s portals! You should ask them for a tip, though.

The next changes are of more immediate importance to us, and include tweaks to a number of different talents. Alter Time now has a one minute cooldown (down from 1.5 minutes). This may make Alter Time a slightly more desirable choice in this tier, but it’s still tough to compete against Flameglow and Ice Barrier.

Comet Storm, an unfortunate under performer since launch, is receiving a 94% buff to its damage, with a corresponding damage nerf only in PvP. It will deal 33.3% less damage in PvP combat. I’m really interested to see this change on the live realms, since it may well mean that frost mages aren’t forced to take Prismatic Crystal in order to be competitive. This seems to be in line with the devs’ stated goal of allowing more “variety of viable builds, without bringing down the existing popular choices.”

Evanesce is receiving what amounts to more of a fix than anything, the patch notes are a bit vague but it should now provide protection against many more effects, and function more consistently. So if you’ve been using it as a talent and finding it lackluster, it should hopefully prove more useful after Tuesday.

Ice Nova (a frost only talent) is now going to root the target instead of stunning them, but the root is no longer affected by diminishing returns. This matters more to PvP mages of course, and the loss of a reliable stun probably stings them a bit. But hopefully a root without diminishing returns will help make up for it.

Mirror Image is also receiving a slight frost exclusive nerf — unfortunately, your daring doubles will now do 15% less damage with their Frostbolt. 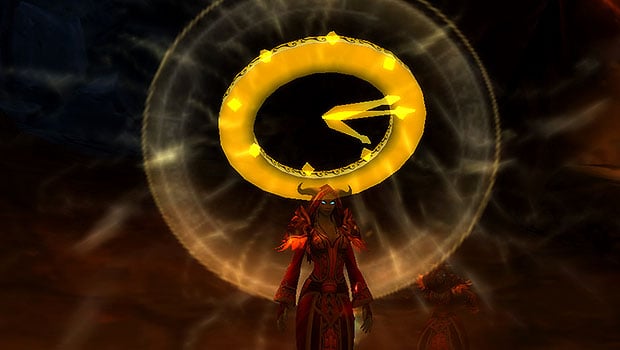 Arcane
If you’re an arcane mage who likes to PvP, you’re going to love this next one. Presence of Mind can now be applied to Polymorph spells for some nearly instant crowd control. This may also have some limited use for PvE mages, but only if your raid leader is so impatient that 1.5 seconds or less seems long to them.

Fire
Fire mages will have to let go of the dream of being elementalists, because after Tuesday Frostfire Bolt will be replaced by Fireball for fire only. If you were a fire mage using Frostfire Bolt in order to apply the 40% slow effect, that option won’t be available to you any longer. Don’t despair, though, since you will now be able to obtain a slow in the form of Glyph of Ignite. Keep reading for more details.

Frost
Deep Freeze’s stun effect now always breaks on damage from Ice Lance or Ice Nova, but no longer has a chance to break from other damage sources. I’m not sure if this is perfect, but it should be a welcome change. At least you’ll be guaranteed one icy blast to an enemy’s face, rather than having your Deep Freeze instantly disappear because of a stiff breeze.

Glyph of Frostfire Bolt is being replaced by the brand new Glyph of Ignite. This glyph will cause Ignite to also reduce the target’s movement speed by 40%. So if you were upset at losing the ability to cast Frostfire Bolt, fire mages, here’s where you can reclaim that slow if you need it.

Glyph of Splitting Ice is getting what should amount to a benefit in many PvE and PvP situations. The cleave effect will now hit targets up to 60% further away from the primary target, but will no longer ignore crowd-controlled targets. So, you may have some trouble near crowd-controlled mobs or players, but overall your cleaves will probably ice more enemies. 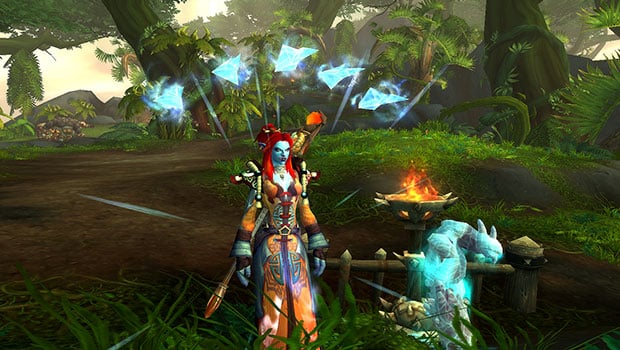 It seems that the Tier 17 four piece set bonus effect, Pyromaniac, was a little too powerful for fire mages and is being slightly nerfed. The effect is being reduced from approximately one proc per minute down to 0.7 procs per minute.

If you’re a PvP frost mage, you’ll see a major change to your PvP set bonuses after the patch. The PvP 2-piece and 4-piece set bonuses for frost mages have been completely redesigned. For the two set, Cone of Cold will now leave behind a patch of ice on the target area slowing any enemies caught within it by 50% for 6 seconds. The 4-piece set bonus now increases Frostbolt damage by 30% against unsnared targets, and increases Frostbolt damage by 50% against snared targets.

So that’s it, all of the changes that affect mages specifically! A few adjustments and quality of life things, nothing terribly earth shattering but hopefully some welcome changes. Please keep in mind that although this information was current, patch notes are always subject to change right up until the patch goes live.

It was a timely coincidence that the patch was due to drop right after my first column, but it begs the question from all of you: What would you like to see here? Do you have any pressing questions about mages? What’s your area of interest? I can’t promise to tackle every single thing or guarantee specific time frames, but your responses will help determine where we’ll focus over the next few months as we build this new place for mages together. I’m excited to have the opportunity to talk with all of you. Welcome home.