Officers’ Quarters: Running around on fire 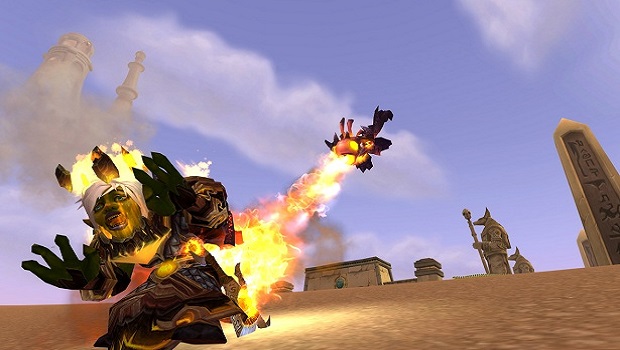 Officers’ Quarters answers your questions! This week we cover PUGs, coaching your players, raid sizes, and the expectations when you join a raiding guild.

kramilot
Thoughts on pug raiders? As in folks who can carry their own weight but can’t raid on a specific schedule who are clearing most/all normal and heroic content? I don’t know if it would merit a whole column or anything, and to be honest, I’m not sure what the content might look like, but I would hazard it’s a new, decent-sized sub community that has recently come into existence.

I’m all for this. The new group finder is just about everything I’ve ever wanted from a group finder tool in WoW. I’m glad that it’s seeing so much use, and not just for raiding, but for any conceivable activity in the game. It’s a huge addition to the game and a tremendous asset for officers.

Raiding in modern MMOs shouldn’t be limited to those who can dedicate 6+ hours per week. Previous expansions had healthy PUG communities for older raid tiers and even for current tiers in some cases — particularly in Wrath when every raid had four different versions to run every week. I’m happy to see the new group finder bringing back PUGs in a big way.

Leading a successful PUG raid is a good idea for a future column.

Jpec07
How do you go about coaching someone in their class when it’s something you are completely unfamiliar with? I’m not comfortable with asking people to sit out due to low performance, but at the same time, if it’s hurting the raid, I’m not sure what I can do to help.

You can’t necessarily coach them on specific mechanics if you don’t know their class/spec. However, there are many things you can do to help them with performance issues.

Even with all this help, they won’t top the meters overnight. But what’s important here is that they are willing to learn, accept constructive criticism, and keep improving.

Saik
I’d like for Scott to give his full take/opinion on the current 20 player raid size for mythic. This also was a topic recently my guild had while in vent, and many of them- including myself- think 15 players would have been the ideal size.

I think 20 was the right choice for Blizzard, if they had to unify an entire difficulty into one size. Keeping it at 25 would have been easier for existing 25-player raiding guilds but an insanely steep climb for existing 10-player guilds. At 20, it’s still rough for 10-player guilds. But at least this way two 10-player guilds can merge or form an alliance and have a reasonable shot at a working roster.

Maybe I’m biased by my fond memories of Zul’Gurub and Ruins of Ahn-Qiraj in classic, but I like the 20-player size. It’s a good balance between the player as cannon fodder in a 40-player army and the player as an indispensable hero who must never screw up in a 10-player “all-star” team.

Benjamin Seeberger
I’ve always loved the idea of raiding but never felt I had the time. What’s the general time requirements for joining a typical raiding guild? Do the time requirements need to be without interruption? How are dropouts generally handled (emergencies in RL that come up) – do most guild tends to tolerate dropouts or do they constitute a kind of black mark on your raid viability for the future? How much of raiding is like a typical job where you clock in and out in order to prove your worthiness to the guild?

In Mists and now Warlords, raiding has become far more accessible to players with limited or uncertain availability. Flexible raid sizes allow players to step in and out of raids without causing disruption. So if you’re a player who always has to arrive late or leave early, or you need to step away for 20 minutes here and there during a raid, that is far less hassle than it used to be for raid leaders.

Granted, a raid leader isn’t going to be thrilled with such behavior, so make sure you’re honest about your needs and schedule with whatever guild you join. Make sure they’re OK with it. Plenty of social raiding guilds, however, are fine with inviting raiders whose schedule may not be perfect. I do recommend playing a DPS if you intend to have spotty attendance or take frequent breaks. That way, other players won’t have to switch specs whenever you come and go.

If you want to run mythic raids, however, you should ignore all that. Most mythic raid guilds want high attendance, undivided attention during raids, and long hours — at least 8 per week, and usually closer to 12 or more. There are always exceptions, of course, but in general this is the paradigm.

Real-life emergencies are never a “black mark” for any remotely reasonable guild — unless you lie about them or they happen so often that your fellow raiders wonder if you’re secretly fighting crime.

As far as overall time commitment goes, it very much depends on the guild. Some guilds raid once per week for three hours or so. Some raid every night of the week until everyone is too tired to keep their eyes open. So look for a guild that matches your own needs and wants best.

Or open the group finder and join some PUGs! A good guild makes WoW more fun, but they aren’t absolutely necessary to raid. I also think it’s better to wait and find the guild that is perfect for you rather than join the first one that’s willing to invite you.

That’s it for this week. I already have a backlog of questions, but please keep them coming!