What makes dungeons worth running? 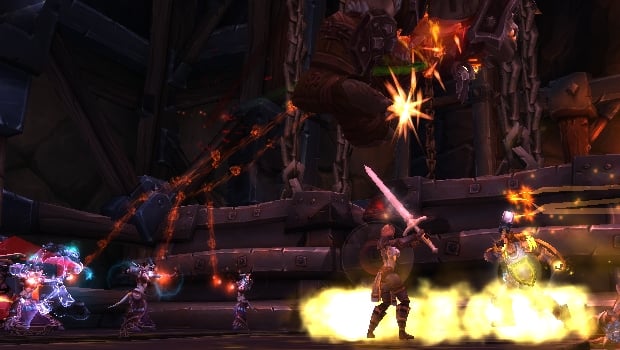 I run one or two dungeons a day. I used to run more, but once my gear got better than anything in them, it wasn’t really worth the effort beyond the dose of garrison resources, and now I’m mostly running that second one out of pure stubbornness. Y’see, I like dungeons, and I want to like running them. Generally speaking my PuG experiences have been better this expansion, but not so much better that I’ll put up with an hour or so between queues – I end up doing my various chores and dailies and then I don’t want to get sidetracked, and with LFR available it always seems weird to run a dungeon instead.

There’s Challenge Modes – I’d like to get into them – and that’s about it for reasons I can think of to run five player dungeons right now. Resources and possible alt modes in the future. So, turning the floor over to you. What do you think dungeons need to keep them viable? Make them more like Nephalem Rifts from Diablo III, with a boosted chance of awesome loot drops? Additional rewards beyond gear?

I suppose we could argue that they serve the purpose they were designed for – they get you geared up for normal/heroic raiding, but in my experience a lot of players run them until they hit ilevel 615 and then immediately jump into LFR. Now, you don’t need LFR gear to run normal/heroic raids. You can absolutely start Normal Highmaul in full 630 blues from heroic dungeons. But I’m not seeing it – when I queue for both a dungeon and LFR at the same time LFR almost always pops first. And that seems to me to be the real reason dungeons are falling by the wayside – you can not only get better gear in LFR, you can get in to LFR a lot faster, especially as DPS.

Of course, this is kind of what we sign up for when we sign up as DPS, right? If I really want fast dungeon queues, I could tank (and sometimes I do, especially now that my gear is a lot better) or roll a healer. But of course that’s not a solution for everyone. Not all of us are proficient at these roles (for example, I’m a terrible healer, even on my resto shaman) or want to play them. We have four classes that are only DPS, and if those classes are your favorites, or you generally only play a DPS spec (ret paladins, enhancement shamans, etc etc) should you be forced to perform a role you might not be skilled at or interested in just to get those queues? I’d argue it’s not to the benefit of anyone.

Perhaps it’s simply time to accept that dungeons exist to feed us into LFR and from there into normal/heroic raids. I’m not very fond of that idea, and I do accept that its possible to go straight from dungeons into normal raiding, but it feels off right now – the balance between dungeons and LFR seems skewed to benefit LFR. One idea would be to include a weekly quest, similar to the one that gives a greater bounty of spoils from your weekly garrison quest, that rewards you for running dungeons. The frequency of this quest might need adjustment (making it weekly might not really be worth much, but making it daily could quickly get out of hand). Another possibility could be to simply make it possible for the end boss of a heroic to randomly drop the greater bounty, so that it’s worth completing heroics for that chance. Also, put more random fun loot in there – stuff like the pets and mounts that drop from the satchel when tanks or healers are in demand, again, potentially on a random end boss drop.

It just seems like dungeons are in danger of repeating their slide into irrelevance from Mists, and I’d hate to see that.