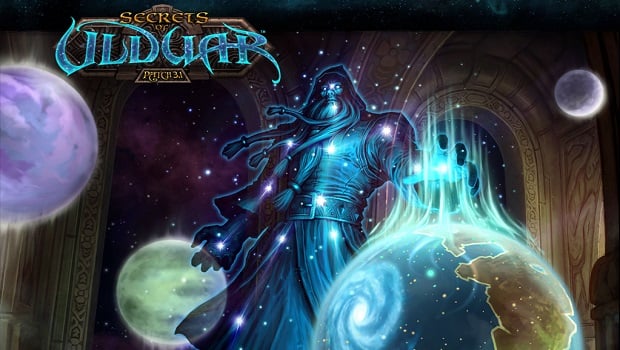 Brann Bronzebeard screams as he flees from Ulduar, barely evading Kologarn‘s eye-lasers. This was our first glimpse of what patch 3.1 had in store for us. Blizzard called it “Secrets of Ulduar.” It would go down as one of WoW‘s all-time best.

The trailer went on to show us Varian, Jaina, and Rhonin discussing Brann’s findings, only to be interrupted by Thrall and Garrosh. Garrosh once again establishes himself as a hot-headed hater, attacking Varian even as Yogg-Saron casts his shadow over the world. Rhonin has to push the two apart with a blast of arcane magic. “A true warchief would never partner with cowards,” Garrosh says. “At the Wrathgate,” Varian counters, “the Horde’s partnership killed more of our men than the Scourge. I’m done with your Horde. May this ‘death-god’ take you all.” Thus, ongoing enmity between the factions sets the stage for a small band of adventurers to brave the depths alone.

I covered Ulduar in detail on a site that shall not be named, so I won’t do so here. Suffice it to say, Ulduar is still considered by many players — six years later — as the best raid that Blizzard has ever created.

Instead, I will provide you with Blizzard’s original description, which gives me the chills to this day:

Originally Posted by Blizzard
Since discovering Ulduar in the Storm Peaks, adventurers have journeyed to the titan city to learn more about its mysterious past. Further exploration has revealed that the magnificent complex is above all a prison, intended to permanently confine the Old God of death, Yogg-Saron. This ancient horror has corrupted its guards, and now it is breaking through the last of its restraints. Faced with the peril of Yogg-Saron’s imminent freedom, a band of mortals has made preparations for a sweeping assault on the city. Overcoming the legions of iron minions and towering defenses at the city’s entrance will take tremendous strength, but even that great victory may not be enough to overcome the madness that dwells below.

What many don’t recall is that the far less popular Argent Tournament event actually began in this patch also. We associate it with patch 3.2, which provided the Trial of the Champion dungeon and the Trial of the Crusader raid. But we laid the groundwork for it here — literally. We participated in quests to help build the coliseum and other tournament infrastructure. Patch 3.1 added most of the elements, including the dailies, rewards, the ability to gain reputation with your racial factions, and … /drumroll … jousting. 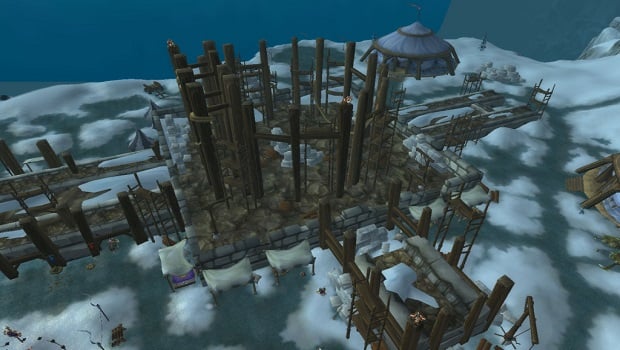 “Mounted combat” sounded like a dream come true when Blizzard first announced it. We imagined ourselves shooting arrows from the saddle or slashing at foes from raptorback. The reality was no such thing — we’d have to wait until Warlords of Draenor to live out that particular fantasy. Instead, Argent Tournament jousting was designed as a vehicle-based minigame. You had a new vehicle UI with abilities that revolved around maintaining a shield while breaking down your opponent’s defense.

Annoyingly, you had to equip a lance in your weapon slot in order to do it. The number of players who accidentally tried to fight enemies with their zero-stat lances equipped must total in the millions. We all did it at one point, utterly confused by the tiny numbers popping up over our target’s head.

It’s been said that Blizzard fell in love with their new vehicle UI and went a bit overboard with it in Wrath. Multiple dungeon and raid bosses featured “vehicles,” including Prophet Tharon’ja, Instructor Razuvious, Malygos, Flame Leviathan, the larger portion of the detested Oculus dungeon, etc. etc. Nowhere did players experience “vehicle fatigue” more acutely than with jousting, however.

We had to joust — a lot — as part of our initiation into the tournament. Then we had a daily quest to joust. Winning one joust wouldn’t have been horrible, but the quest required four wins. The Trial of the Champion dungeon in 3.2 also included gratuitous jousting. By then, players were sick to death of jousting and it was the last thing we wanted to do.

Perhaps the biggest legacy of patch 3.1 is the dual talent specialization feature. Prior to this patch, switching specs meant

Even if you weren’t the one who had to switch, you had to sit around while the other person accomplished all these tasks. It was an absolute headache.

After dual talent specs were introduced in 3.1, switching took seconds rather than 20 minutes. And it was free — once you paid the 1000 gold to unlock it anyway. (You also had to be level 40 at first.) Few changes in WoW have had a more lasting impact than this one.

For many players, dual talents fundamentally changed our in-game identity. Many of us began to think of ourselves as not just a balance druid or holy paladin but as balance/resto or holy/ret. Dual talents made it so easy to switch that many raiding guilds expected players to have two specs ready to go at any given time. The ability to alter your raid comp so quickly became a key part of progression raiding. It also helped PUGs succeed that might have collapsed when people realized they’d have to wait around while that fury warrior switched to prot. PvP players loved the ability to switch between their PvE and PvP specs without effort.

Glyphs, on the other hand, remained consumable. They weren’t tied to our spec like they are today. So you still had to switch them manually. Fortuantely, Blizzard did away with the Lexicon of Power requirement in this patch, so you didn’t have to travel to a city to switch glyphs. Those glowing, hovering books were relevant for exactly one patch, but they still exist in the game. In fact, you have one in your garrison right now if you have a Scribe’s Quarters.

The equipment manager was supposed to go live in 3.1 to facilitate swapping armor when you swapped specs, but players had to wait until patch 3.1.2 a month later. Addons like Outfitter became more popular than ever. 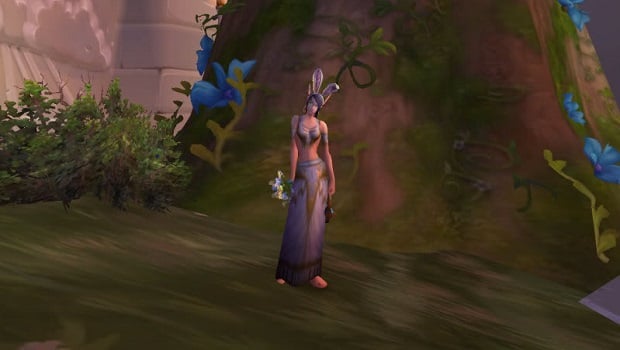 Another controversy in 3.1 was less about playing the game and more about social issues. Noblegarden was delayed in 2009 because patch 3.1 included a complete overhaul of the event. The revamp added achievements, a pet, a daily quest, cosmetic items, and the controversial Spring Flowers item.

Using Spring Flowers put rabbit ears on a target player. That seems innocent enough on its own, if you ignore or are unaware of the concept of a “Playboy bunny.” But Blizzard went out of their way to call attention to the seedier side of rabbit-ear costumes. One new achievement was called Shake Your Bunny-Maker. To earn it, you had to use Spring Flowers to put bunny ears on a female of each race. It was bad enough that the achievement only targeted female players, and that it was a pun referring to exotic dancing for cash, but the other requirement is that the players had to be at least 18th level. In the United States, 18 is the legal minimum age for nude photos.

Many players called the achievement sexist. They took to the official forums and other sites to complain about it. Blogger Robin Torres wrote that she didn’t find it offensive — but the fact that she even had to tells you that maybe Blizzard should have designed the achievement differently. Simply allowing male players to be valid targets could have prevented the controversy.

The demise of “ghetto hearthing”

After Blizzard removed auto unstuck hearthing, players found another loophole using instances. When you left a group and you were inside their instance, the game kicked you out of the instance after 1 minute, like it does today. Back then, however, instead of sending you to the nearest graveyard, it sent you to your hearthstone’s location — regardless of your current hearth cooldown. Players would purposely form groups and enter dungeons so they could hearth this way. The community called it “ghetto hearthing.”

Blizzard changed the instance boot teleport to the graveyard in 3.1. To compensate, they also reduced the cooldown on hearthstones from 60 minutes to 30. 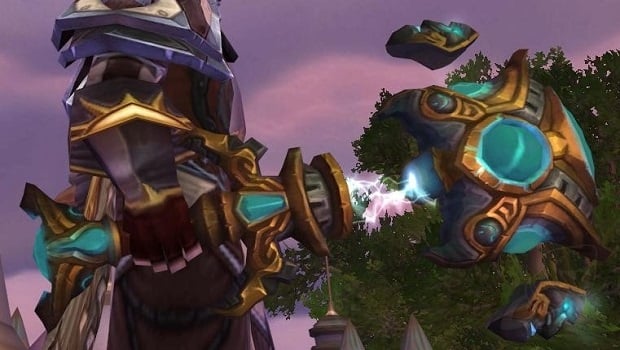