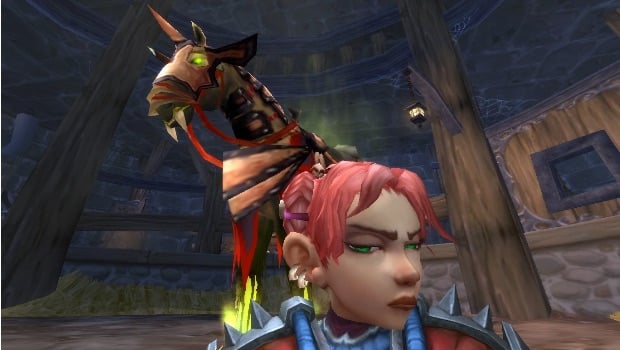 I’ve been running a lot of retro raids for pets lately, and it’s got me feeling nostalgic for the raids of old. I’m not sure if the dungeons I’m nostalgic for are better than current content or they just look better from a distance — but whenever I run Karazhan for the mount that will never drop,  it’s like stepping into a time machine. I don’t play the same character (or even the same faction) I did when Karazhan was new, and many of the people I ran with then have been lost to time… but still, whenever I step through that instance portal, it takes me back to the good memories of raids done with friends.

The memories make these old instances seem brighter, somehow… and not just because the color scheme for orcs seems to be a muddy haze of brown and red. For me, even though I’ve done plenty of raiding in my time, it’s Karazhan that brings back the most memories, probably because I was in a guild with friends and we always had a blast doing runs, even if we weren’t always successful. (Though, I must admit, nostalgia is probably tinting my memory: raid wipes and learning encounters can be frustrating, and surely it wasn’t all smiles.) Still, this makes every trip back to Karazhan a good one… which is for the best because I want that horse.

But tell me, readers: what’s your favorite dungeon or raid to revisit?

Blizzard Watch is made possible by people like you.
Please consider supporting our Patreon!
Filed Under: Dungeons, Memories, Nostalgia, Raiding
Advertisement