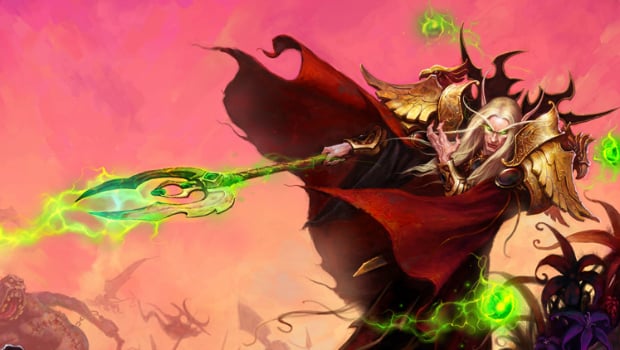 Two Heroes of the Storm devs held a Reddit Q&A this afternoon to answer questions about the patch that dropped this morning. Included in that patch is not only a new hero, Kael’Thas Sunstrider, but big nerfs to two popular tanks, Diablo and ETC as well as many UI polishes. The two devs that participated, John Hodgson and Kent-Erik Hagman both specialize in hero design for the game and kept their answers to that realm.

Much of the talk was around how Kael’thas came about. First the devs went over their basic design steps:

Then the delved into two of the most problematic abilities developed for Kael’thas, both of which are signature to the character in World of Warcraft: his Verdant Spheres trait and his Phoenix ultimate. Verdant Spheres originally appeared passively to enhance his other abilities, but that became too distracting to keep track of, so they settled on an activated ability to give players more control and one less thing to track while playing. For the Phoenix Heroic power, they tried making it spawn an egg that his Flamestrike would hatch, as well as a pet that followed him around and attack enemies, but it didn’t feel epic enough. They settled on the current version that does massive damage over time to everything in its path with splash damage.

There was also a question about why Kael’thas’ Pyroblast Heroic power was not able to target minions, and it turns out this is to help players. In testing, minions were accidentally clicked on as the targets too often so that was disabled altogether. In addressing countering that massive fireball, they pointed out that all tanks have access to Hardened Shield and many heroes have an Invulnerability talent or ability.

No word on a Wretched Kael’thas skin.

There were many inquiries about the nerfs to some Warriors and not others with this patch, especially given that the two that got hit with the nerf bat the hardest, Diablo and ETC, were the most popular Warrior picks at the recently concluded Heroes of the Dorm series. Surprisingly, the changes had little to do with their recent popularity, as they were initiated 5 months ago and took this long to get through the Art and QA departments at Blizzard. These are not balance changes, which can be turned around patch to patch, but design changes. The idea is to give them more viable talent builds.

It remains to be seen if other Warriors like Muradin, Tyrael and the upcoming Johanna become more popular soon, or if these two remain the go-to options for tanking. The devs also stated that the basic vision of Warriors in the game is “excelling at a few things: Initiating Fights, High Self-Sustain (unlike Supports who are allied-sustain focused), damage that ramps over time, and second best CC in the game. (Supports get best CC).” The devs felt these changes reflect that, but promise to keep an eye on the fall out.

Also covered in the chat was the design philosophy behind the Gazlowe changes (to make his turret talent builds more viable), which heroes had each others talents while in development (Zagarra originally had Ultralisk and Kerrigan had Devouring Maw!) and more on how they see the current Warrior meta. If you want to learn more about Kael’thas, a new official Hero Spotlight went live this afternoon.