Heroes of the Storm: Johanna and Kael’thas skills datamined 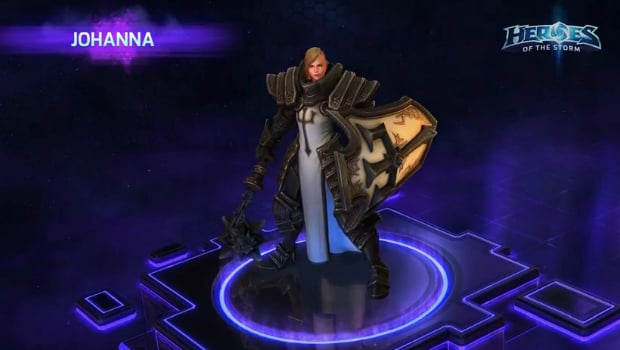 Heroes Nexus has datamined a great deal of information on the Heroes of the Storm open beta and launch patch. This includes both the full ability and talent set for the new unannounced tank from the Diablo franchise — Johanna, Crusader of Zakarum — and the next hero to be released, Kael’thas, The Sun King. Johanna was first acknowledged at the BlizzCon 2014 Heroes dev panel and hasn’t been mentioned since then, until skins for her were announced last week. This was a little strange, given all the hype Blizzard likes to drum up with every new hero. And now we have her full ability set, talents and animations available via datamining.

Johanna has quite a powerful set of tanking abilities including Punish, which slows, Condemn, which pulls enemies to her, Shield Glare, which can hit multiple enemies at medium range, and two heroics — Falling Sword for damage and Blessed Shield for a stun at longer range. Not to mention her unique trait, which activates a damage absorption shield and makes her immune to crowd control for 4 seconds. On top of that, all those abilities dish out the damage as well. Watch the video below that shows off her skills and demonstrates how the right combo can decimate opponents.

Datamining also revealed Johanna’s talent choices which can enhance her already formidable abilities. For example, the L20 Radiating Faith talent increases the number of targets that can be stunned by her Blessed Shield from 3 to 5, allowing her to effectively lock down a tightly formed enemy group. It’s only for 1-3 seconds, but that’s enough for a Diablo Apocalypse or a even a well-timed Pyroblast to land. Check out this next video that shows not only her alternate skins and animations, but how some of her abilities are transformed by her talents, particularly the addition of damage over time leading up to the landing of her Falling Sword heroic ability and the extra damage done by the Blessed Hammer when she pulls her opponents to her with Condemn.

Kael’thas has his abilities and talents revealed as well. He appears to be a very high damage hero with tons of splash damage that will rely on his ability to land a stun to allow his other abilities to hit. His ability set includes a Flamestrike that does area of effect damage after a short delay, a Living Bomb that does damage over time on a target and then explodes for splash damage, and a Gravity Lapse skill shot that can stun an opponent. And then we have his two heroics — Pyroblast (a slow moving fireball that does massive damage with splash damage) and Phoenix (a damage over time ability with splash damage). On top of all that, he has a trait that gives him charges which can be used to greatly enhance his Q, W & E abilities. You can see his abilities in action, alternate skins and animations, in the video below.

Kael’thas’ combat looks like it will rely heavily on him landing his skill shot stun, Gravity Lapse, which will stall enemies long enough for Flamestrike to go off. Pyroblast will take too long to cast and move towards the target for Gravity Lapse to keep them in place (even with the additional stun time afforded by the Gravity Throw talent) and will require another hero to help lock the enemy down for it to land. Zagarra’s Devouring Maw or Zeratul’s Void Prison would be a killer combo. Living Bomb can be talented to spread to other targets upon detonation adding even more splash damage to an already splash damage heavy hero. The lesson here, if you see Kael’thas on the opposing team, is don’t group up if you can manage it.

Kael’thas’ release date hasn’t been announced, but datamined information points to the day Open Beta launches, next Tuesday, May 19th. And tomorrow the Heroes devs will be participating in a Reddit Q&A about Kael’thas at 2:30pm PT. Johanna’s release date is listed in files as two weeks after that, on June 2, the day Heroes officially launches.

All the information above, including release dates, comes from datamined files — so don’t take them as final.

Additional info discovered includes what you have to do to obtain a Heroes cardback for Hearthstone, a Hearthstone magic carpet mount for Heroes, a World of Warcraft Grave Golem Heroes pet and an Iron Wolf mount in Heroes.