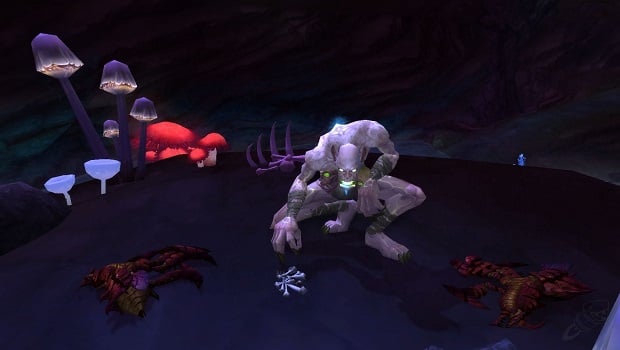 Most rings are little more than an icon and a handful of stats. A few are so much more. During Warlords of Draenor, rings have been a big topic of conversation. Players are in the midst of an expansion-long quest for legendary rings. Recently, the end goal of that quest was revealed — and the nature of those rings was a surprise to many. Ever since, there has been debate among players and developers about the design of the game’s first legendary rings.

What are some of the other interesting and unique World of Warcraft rings? Let’s take a look!

At once a play on words and a nod to perhaps the most famous loot upgrade of all time, The 1 Ring is a parody of J.R.R. Tolkien’s One Ring from The Lord of the Rings. The 1 Ring, of course, provides +1 to all stats. The follow-up from The Burning Crusade is called The 2 Ring. It used to provide 22 of each stat, but that symmetry was a victim of the item squish. Now it only has 10 of each. The 5 Ring was also a casualty of the squish. It once granted 55 to all stats. Now it provides only 1 more total stat than The 2 Ring, despite its much higher item level and the claim that it “ate the 3 and 4 rings.” All three rings can be obtained through fishing — which is how Deagol found the One Ring in Tolkien’s books.

If you think The 1 Ring is the only One Ring-referencing ring in WoW,  you are sorely mistaken, my friend. It’s OK — I didn’t know about the Precious Bloodthorn Loop either until I started researching this article (it drops in Draenor’s version of Shadowmoon Valley, which my Horde characters haven’t fully explored yet).

A rare pale orc named Gorum drops the ring. He’s obviously a reference to Tolkien’s Gollum, a pale and deformed hobbit who carried the One Ring for hundreds of years until Bilbo heroically lied and stole it from him. The Loop has an on-use effect of turning you invisible, just like the One Ring. Unlike the One Ring, it has a 5-minute cooldown. It also deals a small amount of damage to you when you use it. The ring can even take you out of combat as if you used the rogue ability Vanish.

WoW‘s Era of Insane Attunements gave us many memorable quest lines. One such culminated in the Seal of Ascension, which granted you the right to ascend into Upper Blackrock Spire (get it?). Nightmarishly difficult to obtain, owning this ring during classic WoW guaranteed you a spot on the friends list of every player who knew you had it. Advertising that you did in common chat channels was a recipe for harassment, as every max-level character on your realm would constantly whisper you for UBRS runs from that point forward.

The ring itself wasn’t terrible for its time, statwise, but you still had a reason to equip it in UBRS after upgrading beyond it. During the Rend Blackhand encounter, using the ring summoned Vaelastrasz to heal your party. The on-use ability wasn’t in the ring’s tooltip. It was more like an easter egg. The new version of UBRS in Warlords provides a tribute to this ability when Awbee joins the fight against Commander Tharbek. 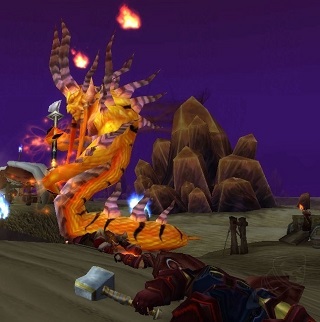 Classic WoW‘s Zul’Gurub raid added the first ring sets. Matching two rings provided a bonus. ZG bosses dropped four different sets: Overlord’s Resolution for tanks, Prayer of the Primal for healers, Zanzil’s Concentration for caster DPS, and the gloriously named Major Mojo Infusion for physical DPS. Back then, I remember that my guild (and likely many) gave loot priority to people who already had one of the rings to maximize our set bonuses. All of these ring sets went away when Blizzard turned ZG into a 5-man dungeon during Cataclysm.

Later, the Ruins of Ahn’Qiraj mixed up the ring set formula. Instead of two rings, “AQ20” gave us three-piece sets consisting of a ring, a cape, and a weapon. The Hunter set, for example, gave a 3% bonus to pet damage. To acquire it, you needed reputation with the Cenarion Circle along with items from the zone to complete quests. If you’ve ever wondered what all those scarabs and idols are for, that’s it!

After experimenting with AQ’s three-piece sets, rings became part of actual tier sets in classic’s version of Naxxramas. Kel’thuzad dropped all of the Tier 3 rings. Tier 3 sets are the only tier sets to include rings. The sets had bonuses all the way up to the maximum of eight items. Every class only had one set of bonuses, tailored to what Blizzard expected them to do in raids. It’s fun to look back at those eight-piece bonuses to see what classes were expected to want back then, compared to what they want now. Mages got threat reduction. Paladins — always relegated to buff/cleanse bots — got a free heal when they cleansed a player. Warriors, the de facto tanks, got an increase to healing received when their health dropped below 20%.

Classic had one more item set that included a ring: the unusual Postmaster set. All five of the set’s items (mostly cloth armor) drop from Postmaster Malown in Stratholme. You can summon him by opening three mailboxes scattered around the dungeon. The ring from his set is called The Postmaster’s Seal. The five piece grants a 5% run speed bonus, so you can deliver the mail that much faster.

Blizzard has added a few more two-ring sets to the game, such as the Twin Stars set from Karazhan. Warlords of Draenor added the first ring set in a long time: the Might of the Warsong set, which can be looted as treasures in Nagrand.

Wrath of the Lich King also had a unique set that consisted of a ring and a neck: Raine’s Revenge.

One final ring was part of a set: the Twilight Cultist Ring of Lordship. You needed the full set to summon Abyssal High Council bosses from Greater Wind Stones in Silithus, such as Prince Skaldrenox. He and the rest of the Twilight cultist content were added to Silithus during classic WoW.

One of the best early tanking rings in classic WoW was the Naglering. Its unique “Thorns” ability made holding aggro on groups of enemies much easier during a time when tanks had limited AOE options (and also when threat was far more difficult to maintain). The Naglering still drops from Golem Lord Argelmach in Blackrock Depths.

It’s likely that Blizzard’s inspiration for the Naglering came from several sources. The first is the Diablo 2 item with an almost identical name. It even has the same Thorns-like equip bonus. Diablo 3 has an item with the same name, but with a different ability this time around.

The Naglering also has a similar name to two swords from literature: one, the Nagelring, was created by Alberich the dwarf in a medieval Germanic legend. (Note that Golem Lord Argelmach is a dwarf.) The other is Beowulf’s sword Naegling.

I’m still waiting for a Paglering with a fishing bonus.

Many of WoW’s more interesting rings are related to fishing. That’s the case for the first heirloom ring in WoW: the Dread Pirate Ring. Originally it was a reward offered for winning the Kalu’ak Fishing Derby, which went live in patch 3.3. Cross-realm zone technology made the fishing events problematic, so both were disabled for a time. The Stranglethorn Fishing Extravaganza returned in patch 5.1. Instead of reinstating the Kalu’ak version, however, Blizzard added its rewards to the Stranglethorn event.  To get the ring now, you have to take at least second place in the Stranglethorn Fishing Extravaganza.

Patch 6.2 will add new heirloom rings to the game.

The epic precursors to Warlords‘ legendary rings have powerful role-specific procs. They aren’t the first rings with that kind of proc, however. As you progressed in reputation with the Scale of the Sands during The Burning Crusade, you could upgrade an epic ring until it gained a role-based proc at exalted. Defeating enemies in the Hyjal Summit raid earned you Scale of the Sands rep.

Wrath of the Lich King had a similar set of rep-based rings. Gaining reputation with the Ashen Verdict by running Icecrown Citadel providing a series of upgradeable rings. Like the Hyjal versions, the rings given at exalted had role-based procs. 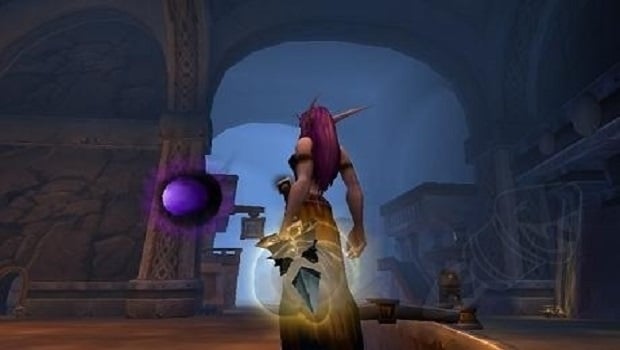 A few other rings have interesting procs or abilities. The Signet of Edward the Odd from the Wrath era had a haste buff proc. Classic’s incredibly rare Freezing Band had a 1% chance to deal frost damage and freeze an enemy for 5 seconds, an effect similar to a mage’s Deep Freeze spell. Deadman’s Hand had a very similar proc. It (very rarely) dropped from Arcanist Doan in the Scarlet Monastery, but it can’t be obtained now. The revamp of the dungeon in Mists replaced Doan.

The Band of Icy Depths allowed unlimited underwater breathing. Like Deadman’s Hand, it’s no longer obtainable. It was a reward from the Scepter of the Shifting Sands questline that opened the gates of Ahn’Qiraj on your realm. If you didn’t like getting wet, you could have vendored the ring for 82 gold — a small fortune during classic WoW.

Finally, there’s Mark of the Dragon Lord, a ring that still drops from Overlord Wyrmthalak in Lower Blackrock Spire. The ring is one of very few with an on-use ability. This one grants a damage shield and a spirit bonus. It also provides a neat visual effect — a dark orb that slowly orbits your character. As long as the damage shield remains intact, the orb will stay. The ring makes for a nifty vanity item — if you can get your hands on it, with a drop rate below 2%.

Have ring, will travel

The Kirin Tor love creating portals. For the low, low price of 8500 gold, they’ll sell you a Ring of the Kirin Tor so you can make one of your own. Dalaran isn’t the easiest place to get to from garrisons or capital cities these days, so if you need to go on a regular basis, these rings are a lifesaver. The rings have a version for each role and could be upgraded throughout Wrath of the Lich King to stay somewhat current with the latest tier loot.

Two other teleporting rings are the Pit Fighter’s Punching Ring and the Mists of Pandaria version, The Brassiest Knuckle. Both take you to your faction’s respective Brawler’s Guild arena. 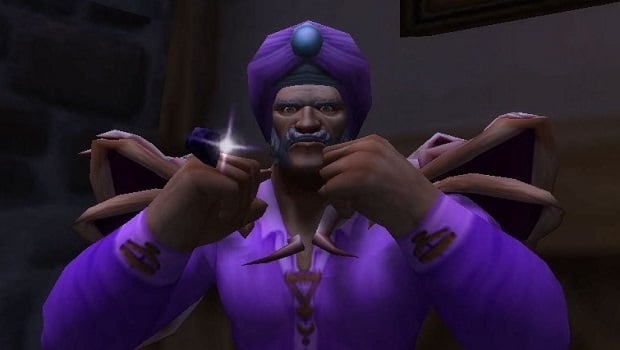 Not all rings are magical artifacts that empower their wearers. Some, like those in the real world, are just ornamental. Chief among these in WoW is Black Ice. It’s one of very few rings with an in-game model that shows up on your character’s hand. It even gleams once in a while. It’s a reward from a short quest line that begins in Cataclysm‘s version of Zul’Gurub. If you’re too lazy for questing, you can buy a similar item from Haris Pilton in Shattrath for 3500 gold.

Amorous players can also express their love with a series of rings, each pricier than the next, from the Cubic Zirconia Ring (“Trust me, she’ll know”) for 5 gold to The Rock (“It’s huge!”) for 100.

The first fishing dailies, added in The Burning Crusade, have a chance to give you a Gold Wedding Band. Ironically, the wedding band isn’t “unique equipped,” so characters can technically wear two…