New Heroes of the Storm and StarCraft 2 content and trailers 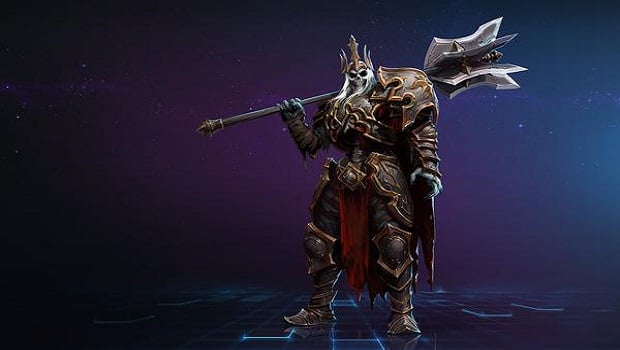 Blizzard developers Chris Sigaty and Dustin Browder were in attendance at the PC Gaming Show as part of E3 celebrations this evening. The two announced new content for both Heroes of the Storm and StarCraft 2‘s Legacy of the Void. Where Heroes is concerned, a brand new cinematic made its debut. The cinematic teased both Skeleton King Leoric and Diablo 3‘s monk — both of which were confirmed beyond any doubt shortly after. Skeleton King Leoric was discussed in far more detail than the monk: Leoric is a warrior hero which turns into a wraith upon death and remains on the battlefield. As a wraith, Leoric can’t deal damage, but damage he would have dealt reduces the duration of his resurrection timer. When Leoric revives, he revives not at his home base, but where his wraith was standing. Leoric has an entomb ability which entraps opponents and prevents them from escaping, and uses his mace to deal massive damage.

The monk is a support hero which doesn’t use traditional talents, but rather chooses a trait at the beginning of the match — deciding between being traditional support, a melee brawler, or a more mobile playstyle.

The developers also announced Whispers of Oblivion for StarCraft 2 with an accompanying teaser trailer. Whispers of Oblivion will be three Legacy of the Void  prologue missions focused on Zeratul and what he was doing during the events of Heart of the Swarm. Though free to all players (regardless of whether or not you own StarCraft 2), players who preorder Legacy of the Void will be granted early access in the July 2015 beta.

Blizzard Watch is made possible by people like you.
Please consider supporting our Patreon!
Filed Under: Diablo 3 Monk, Heroes Of The Storm Monk, Legacy Of The Void, Leoric, Monk, Skeleton King Leoric, Whispers Of Oblivion, Zeratul
Advertisement