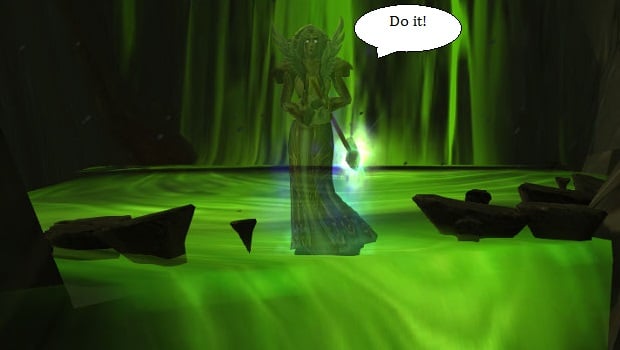 If you’re reading this, it means that you’ve either been patiently awaiting the Shadow Priest column or you’re a newcomer and about to switch to the best class in the game.  Either one makes me happy, so let’s not waste any time getting to what really makes World of Warcraft worth logging into: Shadow!

Since Patch 6.2 is just around the corner, I thought I’d discuss some of the changes and mechanics to watch for in Hellfire Citadel.  Keep in mind, much like a certain stance on flying, this information is subject to change before the patch is released, so be sure to read the patch notes come patch day.

First up, the official Shadow changes.  Brace yourselves, for the days of Shadow as you know it may soon be gone.  The patch notes are changing Shadow in a drastic way and we may have to readjust everything we know.  Ready?

Yes, we now have to use a glyph to bring our mounts into the cold, yet embracing glow of the shadows.  At least Blizzard didn’t try to change any icons on us.

Really though,  at most, you may have to replace a minor glyph to keep your mount all shadowy and evil; otherwise, this change has very little effect on us.  The only real change coming is to Devouring Plague and it acts as a flat damage nerf.  This will likely hit Auspicious Spirits builds the hardest, since Shadow Orb generation and reliance on Devouring Plague is highest.  Clarity of Power and Void Entropy builds both build orbs at a steady rate (Clarity of Power slightly faster), so this change will still affect them but to a lesser degree.

More importantly, this will likely affect our Execute-phase DPS.  Often times, Shadow will remain low-to-middle of the meters most of a fight and then climb during the Execute phase thanks to Shadow Orb generation and Devouring Plague.  Devouring Plague has a high enough damage per execute time that the nerf won’t completely eliminate this great ascension to the top of the meters, but you may notice your DPS climbing slightly slower toward the end of a fight than it does now.

It’s possible that item levels in Hellfire Citadel will offset this change as we progress through the tier.  For now, it’s a nerf, but not one substantial enough to drop Shadow too far below where it’s been throughout most of Highmaul and Blackrock Foundry.

Unlike Tier 17, the Shadow bonuses this time around won’t alter your rotation very much.  Where Tier 17 was all about banking Shadow Orbs to maximize uptime on Mental Instinct, Tier 18 mostly boils down to a passive damage increase — though a pretty good one.  Let’s start with the 2-piece bonus:

On its own, the 2-piece doesn’t change our rotation drastically, but it does significantly increase the uptime on Shadowfiend/Mindbender.  With the bonus, Shadowfiend will be on cooldown for 8 seconds before it’s up again, while Mindbender will effectively be a permanent pet.  What you may be asking at this point is, Will this affect my level-45 talent choice?  Right now, the uptime on Shadowfiend is still significant enough where it doesn’t mandate Mindbender as a permanent talent choice.  The 4-piece, however, may pose some additional questions about the level-45 talent choices:

Originally Posted by Blizzard Entertainment
Set: When your Shadowfiend or Mindbender expires, you gain Premonition, increasing your Multistrike chance by 16% for 15 sec. 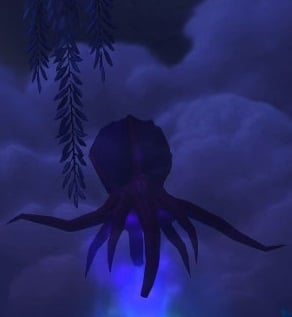 Initially, this appears to be a motivator for picking Mindbender; however, in reality, the cooldown reduction from the 2-piece bonus puts both Shadowfiend and Mindbender on a 20-second cooldown, which effectively means the uptime for the 4-piece is the same regardless of which pet you choose.

What may actually affect your rotation is the fact that the 4-piece allows us to have more predictable moments of burst damage.  For example, if you delay using Devouring Plague or Surge of Darkness procs until Premonition is active, you’ll get more damage out of both of those spells than if you cast them while Shadowfiend/Mindbender are still up (since they need to expire for the proc to occur).

Archimonde will also be dropping some pretty unique loot in Hellfire Citadel — and not unique in the “it’s actually the same Archimonde loot as from Hyjal!” way.  With this tier, Blizzard has decided to do something new with regards to trinkets.  Each class will have a chance to loot a token that can be used to create a trinket with an effect specific to the player’s spec.  It’s worth mentioning that since the trinket drops in the form of a token, players won’t be able to get it without actually killing Archimonde on at least Normal difficulty and will need to compete with other classes for the trinket.

For Shadow, the Normal version of the trinket currently states, “Mind Flay damage applies Mental Fatigue to the target, increasing damage taken from Mind spells by 6.58% for 10 sec, stacking up to 5 times.”*  After some extensive testing on the PTR, I realized that “Mind spells” does not actually refer to a new telekinetic feature of the game and, in fact, just means Mind Spike, Mind Blast, Mind Flay(/Insanity), and Mind Sear(/Insanity).  Take note that Mental Fatigue is a debuff on the target and not a buff on the Priest.  As such, it will become more and more difficult (and less efficient) to maintain as the number of targets increases.  Additionally, this means that using Mind Sear on a target with the debuff only buffs Mind Sear’s damage on that target; the damage to enemies around the primary target remains the same.

Now, because the trinket changes based on spec, and because Blizzard hasn’t fully acknowledged Shadow is so great that it deserves to be its own class (though, they’re getting there) our class trinket’s effect is the same no matter what level-100 talent is chosen.  As such, its usefulness for each will vary.  Going down the list from least to most complicated:

Overall, the trinket is best saved for niche situations.  If you find yourself using Clarity of Power on a single-target fight, the trinket will be a DPS boost but it will also require you to modify the standard rotation associated with Clarity of Power.  Were the trinket to also apply its debuff through Mind Spike or simply buff the player, it might be more useful across a wider range of fights.  For now, other trinkets from Hellfire Citadel will be more sought after by Shadow Priests.

*The tooltip for this trinket currently lists the increase as 3.29% per stack. This is incorrect and will hopefully be updated for the official release of Patch 6.2.

Will I look good?

Our Tier 18 sets are very reminiscent of Tier 16 from back in Siege of Orgrimmar except, this time, the wings are on the front!  Much like Blackrock Foundry, these tier pieces can be obtained by killing the end bosses in each of the five wings of Hellfire Citadel.  Personally, I’m a fan of the Mythic set, as its color scheme and creepy wings fit Shadow nicely.  The Normal and Heroic sets aren’t terrible, but I’ll be sticking with my transmog set until Mythic.

I’d like to take a moment to fully welcome you to Shadow Word, the Shadow Priest column at Blizzard Watch.  It’s an honor to be writing here and I’m excited to see how many of those other Priests I can convert.

I have lots of ideas going forward, but this website is all about the community so I’d love to keep you all involved as much as possible.  If you have any requests for future articles, feel free to leave suggestions in the comments.  I’m also always available on Twitter (@Fizzl_CTR) if you have any quick questions/article suggestions you’d like to send my way.

And for all you non-Shadow folk out there, if this article hasn’t won you over yet, just wait.  I’ll be back with even more Shadowy goodness soon.  Until then, always remember: Shadow isn’t just about melting faces… it’s about melting hearts <3